Nikki Komaksiutiksak delivered emotional testimony about her cousin and throat singing partner, Jessica Michaels, who died at the age of 17 in Winnipeg.

Jessica Michaels would be 34 years old on March 23.

She was Nikki Komaksiutiksak's throat singing partner and cousin, but more like a sister. When they were children, the pair recorded music under the direction of their aunt, who was their main caregiver.

It was her aunt who taught the children Inuktitut and the art of throat singing.

"She out of all of us, she was the one that had the voice. She just sounded so beautiful."

But behind the music was a story of horrific sexual and physical violence.

It was this violence that led Jessica down a path of crack cocaine addiction, the sex trade and death at the age of 17, and formed the heart of Komaksiutiksak's testimony to the inquiry into missing and murdered Indigenous women and girls in Rankin Inlet, Nunavut, on Tuesday.

Komaksiutiksak and Jessica were subjected to whippings with extension cords, beaten with high-heeled shoes, abused with hangers and stabbed, she said. If any of the injuries broke skin, their aunt would use a needle and thread to sew the wound closed.

"We had to have the house spick and span," said Komaksiutiksak, who emotionally broke down during this part of her testimony.

"If we missed the dust you knew you were gonna get it. Extension cord was the worst. She would make sure the end hit our ribs and it was so hard not to cry and scream." 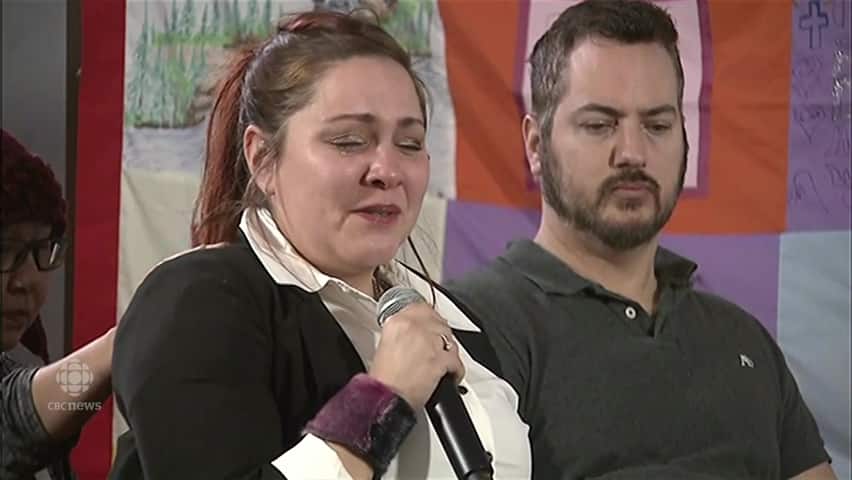 3 years agoVideo
3:11
Nikki Komaksiutiksak gave emotional testimony at the MMIWG inquiry in Rankin Inlet, Nunavut, about her cousin Jessica Michaels, who died at 17 in Winnipeg. 3:11

Living in Winnipeg in the winter of 1997 at the age of 13, Komaksiutiksak ran away. She was picked up by police later that night and begged not to be returned to her aunt's because "as soon as the door shut, I knew I would get that extension cord or hanger," she said.

Komaksiutiksak thought the police didn't see a girl in need of help, but a rebellious teen looking for trouble, so she did the only thing she could to ensure she wouldn't be brought back into that house. She pulled her pants down, took off her jacket, and made them look at her body.

"There were whip marks from the top of my body to the bottom of my ankles," she said.

"One cop gasped and cried and she sat with me in the back of the car so I didn't have to sit by myself."

The case went to court, and she says she and Jessica were subjected to another injustice — days of cross-examination by the defence lawyer.

"Going through this abuse and having to testify that this is indeed what she went through and that defence lawyer is grilling her on the stand, telling her she's the liar that she's lying about everything and she's the one that did it," said Komaksiutiksak.

"That's when her life went way down," she said.

She testified that her aunt was sentenced to two years probation and counselling, a punishment Komaksiutiksak believes was too lenient.

For Jessica, the consequences of the abuse would end her life at the age of 17.

Jessica became addicted to crack cocaine at the age of 14, according to Komaksiutiksak. To feed her addiction, she became involved with a gang that sold her into the sex trade.

In the weeks leading up to her death, Komaksiutiksak remembers Jessica telling her she wanted to quit crack.

On Aug. 26, 2001, Komaksiutiksak got a phone call from her foster parents. Jessica's body had been found in a boarding house. Police ruled her death a suicide — something Komaksiutiksak has had trouble accepting to this day.

She testified that Jessica was not a suicidal person. "Jessica was the type of person who, when in distress, even when high, she would call our foster parents," said Komaksiutiksak.

"Every single time … She didn't call them once that weekend."

RCMP takes another look at the case

In 2014, Komaksiutiksak called the RCMP and asked them to have another look at Jessica's file. Winnipeg's D Division called her back within an hour with a response she said disgusted her.

The detective told her that there were bad people in Jessica's life and that a person of interest had died six years prior, so he won't hurt anybody again.

"Who says that?" asked Komaksiutiksak.

"He died six years ago and he's not going to do that to anyone else so who cares [how she died], really? That's so gross."

Jessica's death and the memories of childhood abuse haven't deterred Komaksiutiksak from keeping her culture close through throat singing. She sings a song dedicated to her cousin every year at a ceremony at the Legislative Assembly in Winnipeg, and has passed the knowledge down.

"I taught my daughters," she said.

"I started again when I was 19 and I haven't stopped since and I won't be stopping any time soon."