Innaarsuit, an island community in northwestern Greenland, is on standby for evacuation because a giant iceberg is looming over it.

'There are 180 inhabitants and we are very concerned and are afraid,' says Innaarsuit local Karl Petersen

Residents in Innaarsuit are on standby for evacuation because a giant iceberg is looming over the island community in northwestern Greenland.

The iceberg is so big it's grounded on the sea floor.

On Tuesday a small section of it collapsed and caused large waves. Residents are afraid a tsunami will occur if the iceberg calves. Rivers near the community could also experience a water surge.

"There are 180 inhabitants and we are very concerned and are afraid," said Karl Petersen, chair for the local council in Innaarsuit.

Residents in houses near the shore are prepared for an evacuation. 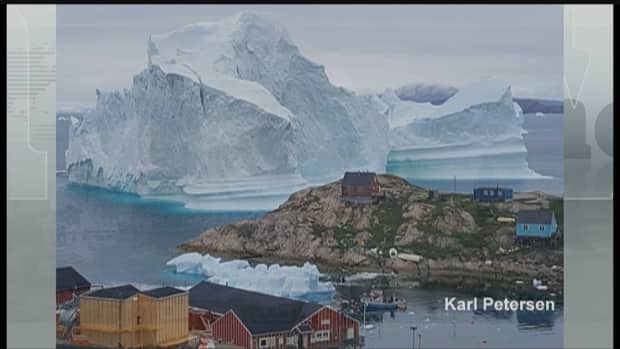 3 years ago
1:11
Residents fear iceberg may collapse and cause severe damage to coastal town 1:11

Another concern is that the community's power plant is near the ocean, and large waves could destroy it. Rain in the forecast could also precipitate calving.

Petersen said everyone is hoping a strong wind will dislodge the iceberg and move it farther away from the community.

With files from Salome Avva