CBC's Marc Winkler spoke with podcast host Rachel Zelniker and producer Peter Sheldon about what they learned during the making of Giant — Murder Underground and why they felt this story was an important one to tell.

Podcast host spoke to many who lived through the tragedy of Sept. 18, 1992

Sunday marks a sombre anniversary in Yellowknife: 30 years, to the day, since the underground explosion at the Giant gold mine.

A bomb, planted intentionally by a Yellowknife man later convicted of murder, killed nine miners who had crossed a picket line during one of the most bitter labour disputes in Canadian history.

Giant — Murder Underground, a new CBC podcast, looks back at that time in Yellowknife's history and how those who lived through it view it now.

CBC's Marc Winkler spoke with podcast host Rachel Zelniker and producer Peter Sheldon about what they learned and why they felt this story was an important one to tell.

Rachel, why did you want to create this podcast?

Zelniker: Well, for all its tragedy, it is undoubtedly a fascinating story. It has much to teach us about labour law, about power dynamics and conflict, about the lingering impact of trauma, about shame and doing things you later regret. And in the words of the people I talked to, it's also a story that some worry is at risk of being forgotten, kind of starting to fade from public consciousness.

I wanted to ask — have all the lessons truly been learned from this time? How does a labour dispute spiral into murder? And, 30 years later, what are the lingering impacts on the people who lived through this? So these questions kind of are at the heart of why we wanted to revisit and play a role in documenting this major part of our city's history on this anniversary.

It's such a fraught and tragic story. How did people react when you contacted them to talk about this?

Zelniker: It was sensitive for everyone I talked to. Sometimes, I talked to people for weeks who lived all the hate, the violence, the anger. And while they felt it was [an] important story to tell, they eventually changed their minds about participating. They just worried that reliving it would be too painful.

Then there were others who didn't want to talk to me — who didn't think we should bring this up at all.

In the end, I spoke with over 20 sources on the record, and everyone I talked to believed it was a story people needed to hear [and] hopefully learn lessons [from] so nothing like that ever happens again. That was the common thread, and 30 years has also allowed for a lot of reflection, so some people who refused to talk about this for years were finally ready. 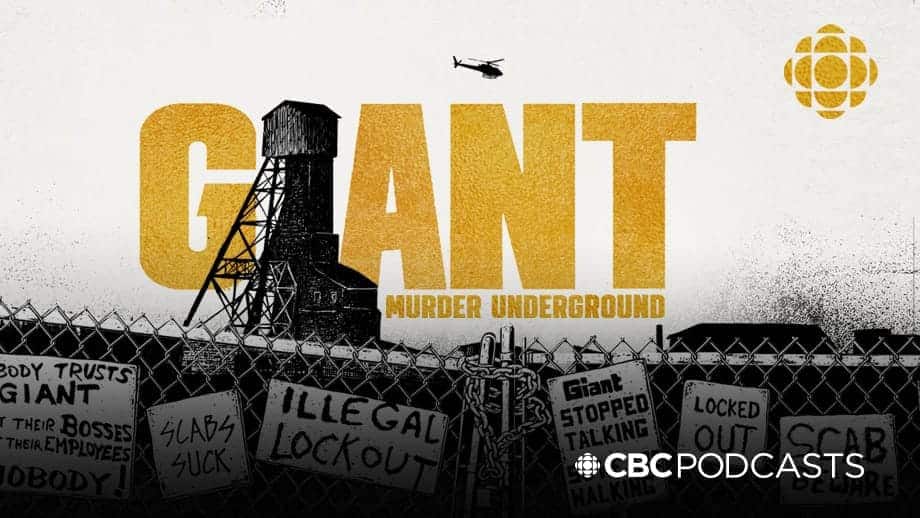 Giant1:57Introducing Giant
Enter one of the most bitter labour disputes in Canadian history. On September 18, 1992, nine workers crossed the picket line at the ‘Giant’ Gold Mine in Yellowknife. Minutes later all were killed in a horrific explosion. This 7 episode series explores the lingering impact on a divided city and asks: how does a labour dispute spiral in to murder?

What did people specifically want to tell you when you did talk to them?

Zelniker: I spoke with multiple union members, community members, police, labour professors, and they are all still united in this belief that the lesson regarding replacement workers still hasn't been fully learned. Quebec and British Columbia are the only provinces with universal anti-replacement-worker laws, and that's baffling for people who lived through this tragedy and think that, had that kind of a ban been in place, things just wouldn't have spiralled as they did.

Sheldon: A couple of the people we hear from in the podcast are the daughters of some of the men that were murdered in that underground blast. One of them is Pam Sawler. She's the daughter of Malcolm Sawler ... and he was a replacement worker. Pam obviously wishes that her father hadn't crossed the picket line, and has come to really understand the fraught nature of this particular contract. But one of the most striking things she said that sort of sticks with me is about all that rhetoric — you know, the "Scab, go home!" chanting, the use of that terminology — that just sort of had a terrible effect.

She obviously has a lot of anger and sadness, but there's this really interesting, heartwarming bit of sympathy that comes from Pam. For all the things she went through, she talks about how, had she been in Yellowknife, things would have been worse. In that, there's a judgment on the community, I suppose, and just how bad things went. But also, you hear it truly from her heart — just feeling like what happened here was this really sad time, and she feels for the folks that lived through it.

What are some of the most interesting things you learned or that surprised you when making this podcast?

Sheldon: One of the things I got to discover along the way is just about the life of miners. I've never been 750 feet underground, or further, and experienced that darkest-dark. You can imagine, the way people describe it. I was speaking with somebody in town: "There's nothing like when that light is coming toward you," is the line — you know, that gleaming headlamp on a miner's helmet, when you're in a real tough spot underground and help is coming.

It's a really striking image, and this sort of creed that miners take care of miners. And undoubtedly, that was broken, I guess — tarnished — in this dispute. As I listened to all that tape, I [was] really just struck by how difficult that would have been for miners, these men that worked underground, to experience that shift.

Zelniker: Something that really stood out to me, and I think this story is a stark example of, is how desperation can lead to violence. I'm not justifying anything that happened. I really did learn how in the haze of hate, division, anger, when people just feel like they're pushed to their limits, it's easy to lose touch with a sense of what's right and wrong, and do things maybe you wouldn't do in other situations.

But there is hope in this story, too — people choosing to forgive, stories of people who bravely called out their fellow community members when they felt like they'd gone too far. There's strength, there's resilience, and you'll get that too when you listen.

With files from Marc Winkler