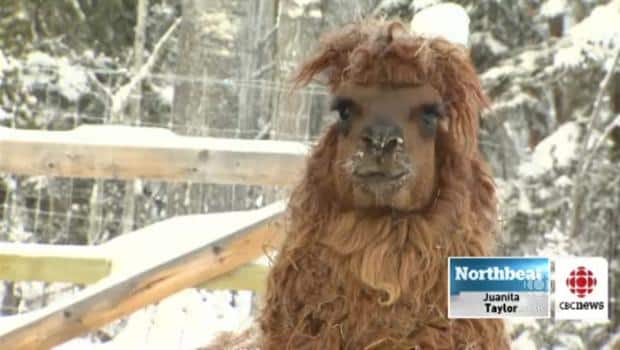 A couple in Forth Smith, N.W.T. say northerners are embracing their unusual business.

Fort Smith is quite a distance from South America, but the four are holding up well.

"Alpacas are quite hardy animals," said Couvrette. "They are from the Andes where it can get to 20 below at night."

The farm is a hobby. Both Couvrette and Katz hold other jobs, but they also sell spun wool and filling for pillows and comforters. They say alpaca fur is more resistant to water than regular wool and lasts longer.

"People in the North would be quite familiar with it," he said. "It's quite similar to caribou hair where the centre of it is hollow, so it actually retains much better insulation value than regular lambswool."

When people order wool, they do so by naming the alpaca whose wool they want.

"Instead of people trying to describe the shade of wool they want, you know they can say 'I have a skein of Morgan. Can I have two more, please?"

"Having acreage out here, it seemed like a good opportunity,” he says. “After a bit of research, I sorta figured alpacas was the way to go."

They've had the animals for the past four years and plan to bring up at least five more. And as far as diversification goes, Couvrette says he'd eventually like to bring some llamas up North as well.