2 other fires in city overnight 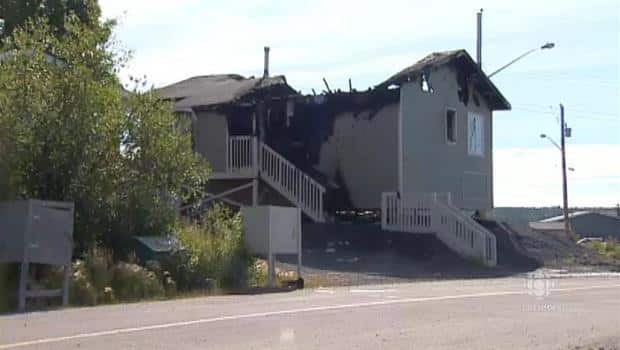 A fire early Wednesday morning has destroyed a warehouse in the Kam Lake area of Yellowknife.

The warehouse belonged to Wilf’s Renovations, a company which specializes in restoring buildings from fire and flood damage, burned down.

A neighbour spotted the fire at about 6 a.m. Wednesday and called the fire department.

No one was in the building at the time.

Around 2:30 p.m., fire crews returned to the scene as a hot spot flared up with some minor flames and smoke.

A house in Ndilo also caught fire early Wednesday morning at about 3:15 a.m.

Lisa Goulet said she opened her bedroom door and saw the hallway illuminated with flames. She frantically tried to put the fire out using a garden hose.

She and her family had lived in the house for only two months. The fire may have been started by a cigarette.

A vehicle in the downtown area caught fire around 6 a.m. as well. The vehicle was parked on 47th Street near the Goga Cho building.

The Nissan has been impounded by police because this fire is considered suspicious.

No one was injured in any of the fires.

"If they see lights and sirens, please pull over," said Dennis Marchiori, director of the department.

"Let emergency crews go by, whether it's fire, municipal enforcement or the RCMP, they need to get to that scene and provide assistance. And try not to go down when you see smoke, it just hampers the relief effort especially in non-water-supplied areas of the city. We need those tanker shuttles to get down there so our firefighters can do their job."

Police and the Fire Department are investigating Wednesday's fires. They're asking anyone with information about any of the fires to contact them.