Wednesday is the second day of hearings at the national inquiry into missing and murdered Indigenous women and girls in Rankin Inlet, Nunavut.

Inquiry is in community until Thursday; 20 people expected to give testimony 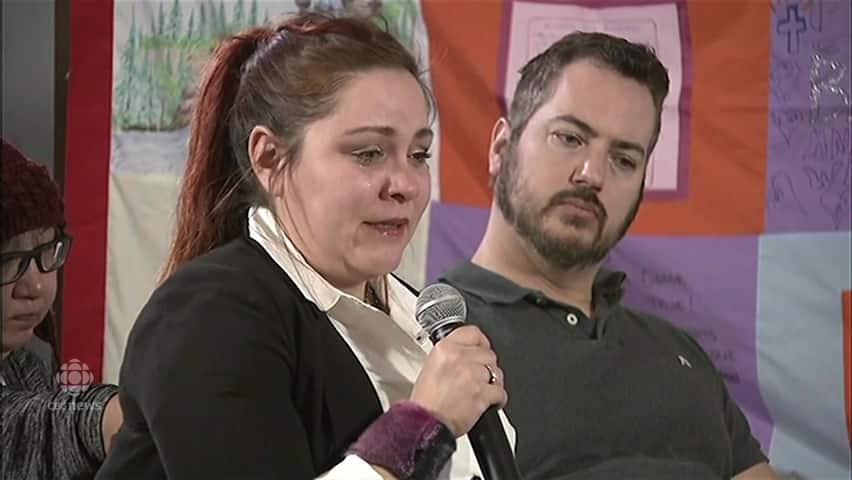 3 years agoVideo
0:34
At the MMIWG hearings in Rankin Inlet, Nunavut, Nikki Komaksiutiksak testified about her cousin Jessica who died at the age of 17. 0:34

Wednesday is the second day of hearings at the national inquiry into missing and murdered Indigenous women and girls in Rankin Inlet, Nunavut.

It is the only stop the inquiry is making in Nunavut.

About 20 people are expected to give testimony, including 10 publicly in front of commissioners at the Siniktarvik Hotel and Conference Centre. There will also be private testimonies and sharing circles.

Ootoova, 46, died in 2008 when her husband beat her to death, according to Nashook. Ootoova's spouse was charged with murder but that charge was stayed the same day, according to media reports.

Authorities originally concluded she had died from consuming a lethal amount of alcohol. But an autopsy report released a year later found blunt-force trauma and bite marks on her body.

Ootoova's spouse died shortly after and murder charges could not be reinstated.

"Why is it men beat women? I thought the point of a union was love and caring," said Nashook in Inuktitut.

Nashook also called for more access to mental health services in the North.

On Tuesday, commissioners heard from Laura Mackenzie, who called on Inuit to speak out about sexual abuse.

The inquiry also heard emotional testimony from Nikki Komaksiutiksak, who spoke about her cousin Jessica Michaels, who died at 17 in Winnipeg.

Micah Arreak also testified in Inuktitut, telling the inquiry that she heard of her daughter's death on the radio.

"The murder of my daughter was immediately broadcasted over the radio ... and that causes a lot of pain when you find out about the death of your own child via media."

Hearings are scheduled to start at 9 a.m. Wednesday and Thursday, and will run all day. Members of the public are invited to join.

The inquiry is travelling across Canada in an effort to understand why Indigenous women are statistically five times more likely to die by violence than other Canadian women.

With files from Randi Beers