Glamping takes a Cree twist with the 'Creetopia'

The Cree Outfitting and Tourism Association and the French company Huttopia have collaborated to develop a prototype ready-to-camp tent called the 'Creetopia,' inspired by Cree culture.

The high-end camping movement known as glamping is coming to the James Bay region of Quebec by way of the Creetopia — a ready-to-use camp wall tent which draws inspiration from Cree culture.

The project is a collaboration between the Cree Outfitting and Tourism Association (COTA) and Huttopia, a French company in the ready-to-camp business for the last 20 years.

A prototype of the Creetopia was unveiled last week in Chisasibi at COTA's annual general assembly and is mostly geared to help boost the tourism industry in the Cree communities.

"They really took our culture in mind to help build this," said Irene Otter, COTA board member, adding its design allows people to either use a wood floor or put spruce boughs on top. 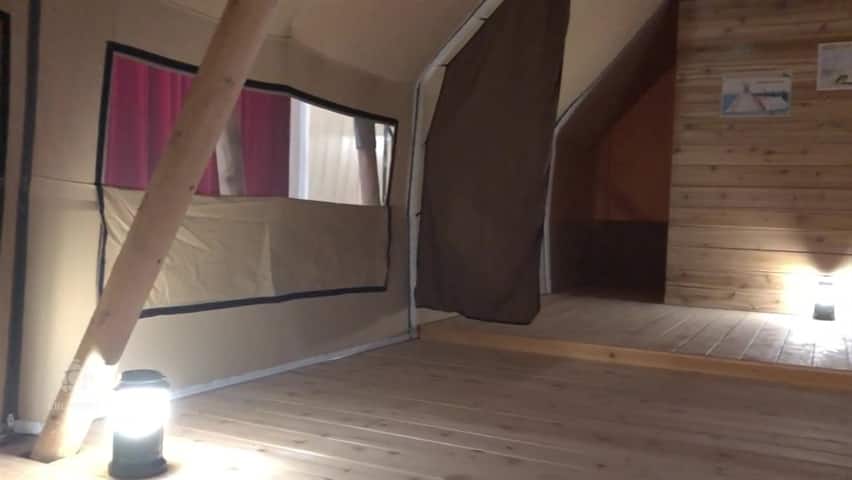 Take a look inside 'Creetopia,

"[We told them] we have boughs most of the time in the teepee or the shaptuan. They really listened to us," Otter said. There is also a place inside the tent for a wood stove.

Otter is also the COTA tourism representative from Waswanipi and says her community is hoping to use the tent to attract more tourists to the region and offer a more cultural lodging experience for visitors.

The Creetopia will be exclusive to the region of Eeyou Istchee and the hope is it will help attract more international tourists.

"This is an exciting project and we are pleased to have the opportunity to work with our Cree communities and Huttopia," said Titus Shecapio, president of COTA.

The project includes the design of the prototype, the development of a five-year implementation strategy including various Creetopia sites for interested communities. The lodging will also be featured at the Réserve faunique des Lacs-Albanel-Mistassini-et-Waconichi, which came under Cree management in 2017 near Mistissini.

[The Cree] know the tent better than us- Philippe Bossanne, co-founder Huttopia

"It's exciting for the region as a whole," said Conrad Mianscum, a tourism planner for the community of Mistissini.

"It will fit in our outfitting camps or a campground or even the cultural camp that we are working on."

"[The Cree] know the tent better than us," said Philippe Bossanne, who co-founded Huttopia with his wife Céline in 1999. The company runs campsites all over Europe, as well as in Canada and the United States.

Both Huttopia co-founders were in Chisasibi last week for the unveiling, and also visited Cree territory in the spring of 2018 to meet with elders and others to learn about Cree traditional dwellings.

"I think it's useful for the community to develop eco-tourism," said Philippe Bossanne, adding it was a challenge to combine Cree traditions and prioritize comfort that international tourists from Europe and the United States demand.

"We are very proud of this," said Céline Bossanne, Huttopia co-founder. "We really fell in love with this community ... and their relationship with nature."

Last week, Chisasibi residents were invited to see the prototype and give developers feedback on ways to improve it.

Made available to Cree

The tent will also be made available for Cree people to buy to use on their traditional traplines, something that might be a harder sell, according to Johnny Saganash.

Saganash is the elder committee representative on COTA's board of directors. He says the Creetopia wouldn't work on his trapline.

"If you're a visitor just to sleep and do things that's OK," said Saganash. "But to do what we do daily it wouldn't work because the rooms are too small."

Saganash was there with his wife Louise, who said she would like to see spruce tree poles used for the frame, which are smaller [and lighter] than those used for the prototype unveiled Thursday.

"With this [wood] it would be too heavy," said Louise, adding she would like to see the wooden polls of the teepee extend right to the ground so the Creetopia could be used in winter.

The Creetopia is expected to be launched officially next summer.