'Being who you are': Cree princess hopes to help LGBTQ2S find tolerance | CBC News Loaded
North

'Being who you are': Cree princess hopes to help LGBTQ2S find tolerance

A Cree 2-spirited college student from Mistissini says she is looking forward to being a voice of acceptance for LGBTQ2S people in Cree communities after becoming the Quebec Cree Nation princess.

A Cree two-spirited college student from Mistissini, Que., says she looks forward to being a voice of acceptance for LGBTQ2S people in Cree communities after becoming the Quebec Cree Nation princess.

Geraldine Trapper won the third Miss Eeyou Eenou Iskwaau pageant, which was held in-person and online on Saturday in Waswanipi, located about 700 kilometres north of Montreal.

"I am a part of the LGBTQ2S community, I am a 2-spirited woman. I am hoping to plant some seeds and make a difference for the next generation … You go through a lot of hardships just for being who you are," said Trapper.

Miss Eeyou Eenou Iskwaau is organized by the Cree Women of Eeyou Istchee Association and has been held every two years since 2017.

It's important that I love … and accept myself as a person.- Geraldine Trapper, Miss Eeyou Eenou Iskwaau 2021

Trapper joined the event via video chat from Gatineau, where she is currently a student at Algonquin College. She is studying General Arts and Sciences, with an interest in Indigenous and justice studies.

As a survivor of childhood sexual and physical abuse, she said she is particularly proud of herself for finding her voice and strength.

"Overcoming all these hardships and challenges in my life and to be able to come to where I am today — and to who I am now as a person that has worked through her traumas, that has healed from her hurt," said Trapper, who also spent time dealing with homelessness as a younger person.

"It's important that I love myself and accept myself as a person." 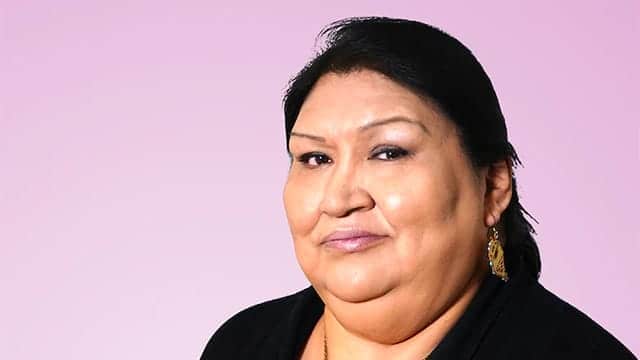 Trapper said with the pressures from school and life, she considered dropping out of the pageant, but the other contestants convinced her to see it through until the end.

"If it wasn't for them … I wouldn't [be] where I am today," said Trapper. "They're all such amazing people."

"They didn't see each other as a threat or an enemy, there was no animosity …They are already decolonizing each other, by empowering, uplifting and supporting each other," she said.

Trapper said she felt the judges were impressed by her connection to her Cree culture, which she said is very important for her. She also has a deep respect for traditional medicines.

"I feel very connected to the land and to my culture and to my ancestors when I work with traditional medicine," said Trapper, adding that she is looking forward to visiting the Cree communities and learning from local traditional healers.

With files from Susan Bell