Firebean Coffee Roasters is a Whitehorse area start-up that puts a unique spin on coffee roasting. 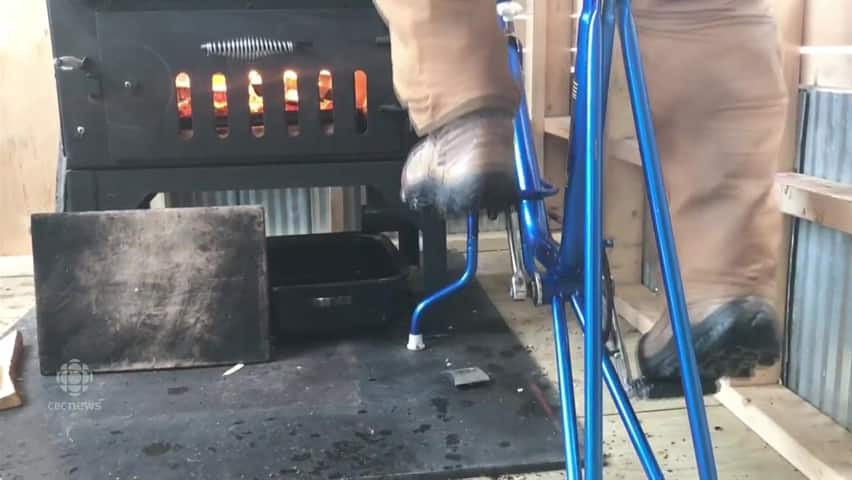 As Mike Russo sits pedalling atop his stationary bicycle, he explains how a series of spindles and sprockets connect to a drum that rotates over a wood fire.

He gets a leisurely pedal and his coffee beans get a nice even roast.

"It's coming together, a little toasty smell," says Russo.

Russo says he and his partner Sarah took up coffee roasting as a hobby because they missed enjoying a good cup of joe.

"It happened out of necessity, really."

The birchwood comes from Dawson, the bike comes from a museum in Parry Sound, Ont. The oven was a flea market find and the drum was fabricated by a metal worker.

Whitehorse may be in the middle of a warm spell, but for Russo, this operation runs regardless of the temperature.

The Ontario-born Yukoner says the colder the temperature, the better. At least for him.

"It's nicer today, I'm probably going to go through a lot less wood... But there's something I like about [roasting] at -30. It's crispy, but you're beside a fire," says Russo.

"We've just been bootstrapping it."

As it turns out, getting it right required quite a bit of experimentation.

"There's a ton of info online, but we've done a lot of trial and error. We burned a lot of batches in the beginning."

The process is a labour of love, he says, with no small amount of labour.

"You're splitting the wood and heating the oven up. You load the drum, spin the drum.  After a certain amount of time roasting, you dump the batch."

Each batch makes a about six pounds of coffee. Russo says he can turn out roughly 15 batches per day.

He says there's no shortage of professional roasters sharing their knowledge online. But as he's discovered, it's a process that involves constant learning.

"One of the variables I've just discovered is changing my pedal speed. So, if I find the fire is running a little low, I'll slow down my pedal so that the bean is in contact with the side a little longer.

Russo says the speed helps keep an even exchange between the bean and the heat.

Knowing when the beans are done is also part of the experimentation he's been doing.

"I can tell by the volume of smoke, the colour, there's a few holes in the drum; my timing and you can hear it chirping and popping."

Today he is roasting a fair-trade, organic Arabica bean from Guatemala.

"I like working with this bean because it's considered a hard bean, so it can handle the heat really well. I seem to get a very consistent roast out of it."

For Russo, it's paramount to ensure the product is pesticide-free, and that everyone involved in the process is compensated fairly for the work they do.

"It just seems fair that along the chain of exchange that everyone's getting a fair wage for their work," he says.

"Before I receive this bag of beans there's tons of people involved in getting it to me. So, it's fair that they're getting paid properly, which doesn't necessarily happen with a free-trade bean."

Russo hopes that his endeavour will inspire other Yukoners who are thinking about their own start-up. He says you'll never know if it's possible until you try.