From orphaned moose to a feisty swan: CBC North's top animal stories of 2019

Every year, many of CBC North's most widely read and shared stories involve animal encounters, capers and captures. Here, in no particular order, are 10 of our favourites from 2019.

The northern territories are known for their unspoiled wilderness, majestic landscapes and variety of wildlife. But those animals sometimes get up to hijinks, which — lucky for CBC North — can make for a great story.

Every year, many of CBC North's most widely read and shared stories involve animal encounters, capers and captures.

Here, in no particular order, are 10 of our favourite and most popular animal stories from 2019.

Lianne Mantla-Look got a surprise in early 2019 when two lynx wandered into her backyard in Yellowknife's Kam Lake neighbourhood.

Her pet cat Cheese was none too happy to have the wild feline visitors, hissing and growling at them from behind glass.

"I've never seen a lynx this up close and personal before, so it is a pretty incredible experience," she said. 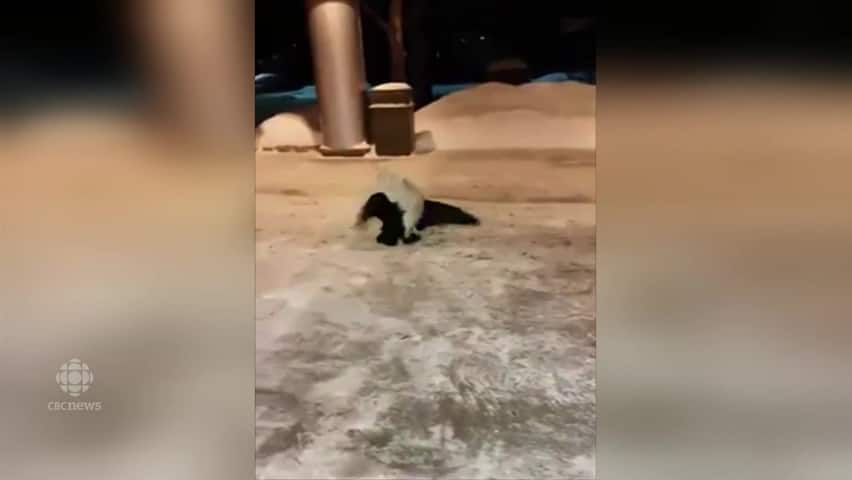 2 years ago
1:19
It's raven vs. owl in this clip from Fort Chipewyan's Fredrick Kevin Ellingson, who spotted this conflict outside the community's nursing station. 1:19

Another animal showdown made our list for 2019 — this time fowl rather than feline.

In Fort Chipewyan, Alta., Frederick Kevin Ellingson caught a raven and snowy owl battling it out.

An epic fight with lots of squawking, Ellingson said there was no clear victor as he watched. When he returned to the scene, some feathers the birds left behind were the only evidence of the scuffle.

In the summer, two unrelated orphaned moose calves were found in different parts of the Yukon and brought to the Yukon Wildlife Preserve near Whitehorse.

Unfortunately, Faro died of illness in early July, but Watson has since been thriving at the preserve.

"It warms our hearts," Dr. Maria Hallock, a veterinarian at the preserve told CBC in September.

"It was a lot of hard work and sleepless nights and extra hours, but it's all worth it in the end, when you see him going in there and being so healthy and happy."

4. A shark in Nunavut

John Kapakatoak got the surprise of a lifetime in September when he caught a shark in his seal nets 40 kilometres north of Kugluktuk, Nunavut.

Boris Worm, a professor of marine biology at Dalhousie University in Halifax says the shark was likely a salmon shark, which are typically found in waters near Alaska and B.C.

Photos of this adorable baby muskox melted hearts in the Yellowknife newsroom and the story of the calf's return to its family is even cuter.

A group of workers was doing maintenance on the Gahcho Kué mine property in the N.W.T., when they came across the calf who was so young its umbilical cord was still attached.

The workers moved the calf closer to a group of muskoxen they found nearby with a drone and it was welcomed back by its family with licks and nuzzles.

"They watched it essentially move off across the horizon with the group. It turned out well," Debeers Canada spokesperson Tom Ormsby said in May.

Steve Buyck and Elizabeth Blair were treated to a rare sight when they spotted a snow squirrel, or dlak degay in Northern Tutchone, north of Stewart Crossing, Yukon.

Blair was able to snap some photos of the bright white critter before it scurried away.

"It's pretty cool, and it's a really neat photo to see," said Meghan Larivee, a wildlife harvest specialist with the Yukon government.

She said it's likely a red squirrel with a gene that results in pigmentation loss.

This winter, Laura Diamond-c rescued an injured swan that was trapped in the ice of Hay Lake near Fort Liard, N.W.T. The feisty fowl took over her bedroom, hissing at anyone who dared to disturb it.

Diamond-c put Polysporin on the bird's wing and gave it water and food until the territory's Department of Environment and Natural Resources picked it up.

The female swan was then taken to a wildlife vet in Fort Simpson to assess its chances of rehabilitation. The bird eventually went on to Burnaby, B.C., to get treatment for its injuries.

"Everybody is really happy that it's rescued and it's going to be fine," Diamond-c said.

August Marcel was in the bush just outside of Fort Chipewyan, Alta., in July, burying his family's dog who had recently died, when he caught an unusual sight — a muskox lurking behind the trees.

The animals are usually found in the far north and rarely venture further south than the Northwest Territories.

Marcel said he shot the animal from two or three yards away and, with the help of his uncle and brother, butchered and skinned the animal. Marcel's other family members had to see the muskox with their own eyes before they believed he had hunted one.

"My grandpa is over 70. It's the first time he's ever heard of one in our community," he said.

It's a northern tradition to raise and race dogs, but you might be less familiar with the art of pigeon racing.

That's nothing new to Norm Pottinger. He's been raising and breeding pigeons in Yellowknife for the past ten years and enters them in racing competitions all over the world.

"For me it's a lot of fun, like I enjoy letting them out and letting them fly and you enjoy racing them," he told CBC in March.

Pottinger said people who raise pigeons tend to do it for life and he plans to keep doing it as long as he can.

Rounding out this year's list is yet another animal altercation, this time of the ursine variety.

Brian McPherson was in the back seat of a pickup truck with friends when they saw two black bears tussling at the dump in Tulita, N.W.T.

Neither animal appears to have been injured or taken the confrontation too seriously but McPherson said it did get a bit scary watching.

"You see it in videos but ... until you actually experience it ... two big heavy weights going at each other — that's actually pretty scary," he said.