Bruce Valpy has been the publisher of Northern News Services since 1989. He reflects on his 32 years at the helm of multiple newspapers from Inuvik to Hay River and Nunavut.

3 decades of stories ‘all about Northerners,’ says Valpy

Valpy first came to the North in 1981, where he worked at Native Press. He returned south to help a friend start up a newspaper. But then, he got the "seven year itch" and returned to Yellowknife.

Annelies Pool, who he had worked with at the Native Press had by then become an editor at Northern News Services — and she hired him on.

"That worked out nicely and I never went back out the door," he said.

Valpy went on to run Northern News Services, which publishes a suite of papers including the Inuvik Drum, Yellowknifer, News/North and Nunavut News.

Valpy said community news isn't just about the big stories — "it's about the daily stories ... they're all about Northerners." 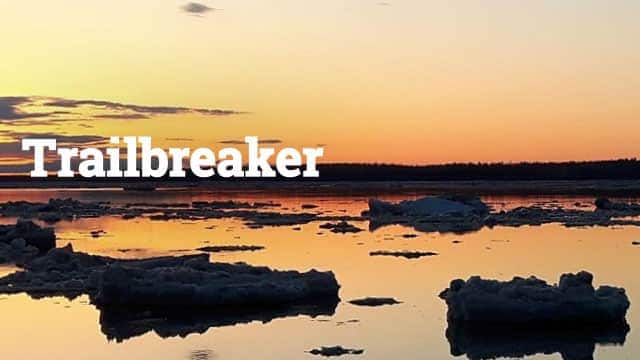 Valpy said the role of the newspaper is to document community history, like on June 5, 1989, when Giant Mine employees began to talk of strike.

"That's what community newspapers are all about. It's kind of the first writing of community history and it's all preserved," he said.

"I kind of see us like a bunch of yappy dogs and if we smell a piece of meat we will chase that. The piece of meat being the story — usually somebody has done something they don't want anyone to know about," he said.

Valpy said he doubts he will fully retire.

"I'll find ways to keep myself busy," he said.

Long-time editor 'back in the saddle'

Northern News Services will soon be led by Mike Bryant, the Fishin' Technician columnist, who started as a cub reporter in 1999, when people were still smoking in the newsroom.

"I'm back in the saddle," Bryant said, returning from two years out of the news world.

He said he has a lot to live up to. Valpy used to be his boss, and before Valpy, the position was held by Northern News trailblazer Jack "Sig" Sigvaldason.

"These are some mighty shoes to fill … these guys have tons and tons of northern journalism and publishing experience. I've often marvelled at Bruce's northern knowledge," Bryant said.

Bryant described his predecessor as "fearless" in making editorial positions that were fair but critical.

"Some editorials were touchy, and Bruce was spearheading that," he said, like when the City of Yellowknife debated the Con Mine geothermal project.

"He always told people, 'We will not shy away from controversy,'" Bryant said.

Valpy had a vision of "how to take a potentially very dry and uninteresting subject matter and make it compelling for people," Bryant said.

When devolution entered the public discussion, "Bruce correctly observed this was going to change a lot of things for the territory. He wanted to explain it to Northerners," Bryant said.

The paper produced a 20 page insert, interviewing every former premier they could contact.

"I remember it being a fascinating project because you had all those people that were watching and being players," he said.

Bryant said his focus will be on serving communities across the North because "the North doesn't stop at Highway 3."

"The passion [Valpy] had for journalism was immense. I'm going to take that torch that he's kept lit and carry it the best I can," Bryant said.

"He had a major effect on journalism in the North."

Written by Avery Zingel with files from Loren McGinnis