A man from Fort Good Hope, N.W.T., spent three years with a knife blade in his shoulder, despite having been checked by multiple doctors and nurses. 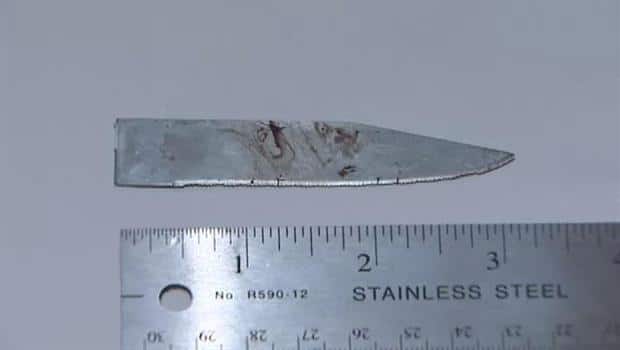 Blade removed from N.W.T. man's back after 3 years

8 years agoVideo
2:05
A man from Fort Good Hope, N.W.T., lived for three years with a knife blade in his upper back, despite having been seen by doctors and nurses. 2:05

A man from Fort Good Hope, N.W.T., spent three years with a knife blade in his upper back, despite having been checked by multiple doctors and nurses.

Billy McNeely, 32, was stabbed three years ago, but the weapon wasn't found until this week.

"They never took no X-rays, they just stitched me up, bandaged me up," McNeely recalled of the day he was stabbed five times and taken to the health centre in Fort Good Hope.

Over the years, McNeely said, a lump formed on his back that always burned and caused him trouble.

McNeely says he went to several doctors but was always told the same thing — nerve damage was causing the pain.

"I've done some jail time in the past. The guards rub over you with a metal wand detector, and every time it hit my back in the jail it went off," he said.

This week, he felt something different.

"My nail caught a piece of the tip of the blade that was underneath the skin and made a little sound, so that worried me," he said.

"I told Billy, ‘There's a knife sticking out of your back.’ I was scared. I was ready to pull it out with tweezers," she said.

Doctors pulled a 7.5-centimetre blade from a kitchen knife out of McNeely’s back.

"I'm kind of upset with the health system," he said. "They should've X-rayed right off the beginning in case there was internal damage," he said.

McNeely, who asked to keep the blade as a souvenir, said he is considering taking legal action against the territory’s health department, and has already left messages with lawyers.