At a public consultation on whether to open a beer and wine store in Iqaluit, elders gave lengthy testimonies on the harms of alcohol. Just three people out of about 150 who attended spoke in favour of the idea.

'It's as foolish as meeting in this tiny room,' says Rev. Mike Gardener 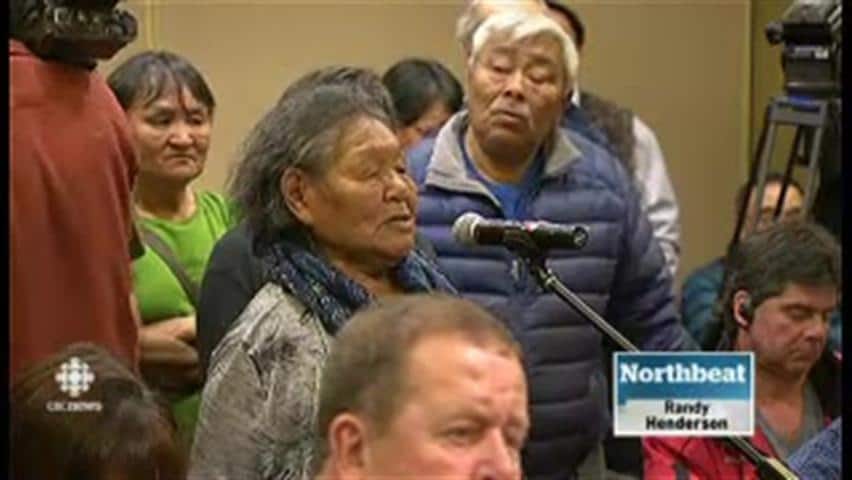 A public meeting in Iqaluit last night to talk about opening a beer and wine store was a sobering one, with lengthy testimonies from elders about the harms of alcohol. Some said Iqaluit’s last liquor store 40 years ago was the pilot program, and it failed.

“We are still in pain,” said Jeetaloo Kakee. “I want to wring peoples’ necks. I’m still so angry about what happened in the 1970s.”

"If it were up to me I'd close all drinking establishments," said Seepa Ishulutaq.

Saila Kipanik spoke about his children and the future for them with alcohol, as well as the abuse that comes with alcohol.

“I’ve seen too many problems,” said Elisapee Quassa, who talked about the “social distress” caused by alcohol.

It was standing room only, with about 150 people packed in the conference room where the meeting was held.

“This is what came out of the boarding home,” he said.

The government argues a direct-sales model could help curb binge-drinking and bootlegging by selling beer and wine — and not hard liquor. Similar models have been implemented in other parts of the world, such as Greenland.

D'Arcy says, under the proposed plan, people could purchase 12 beers and two bottles of wine a day.

“You’re asking for trouble with that kind of combination," said Wilman, who spent two years visiting 20 communities as part of the Government of Nunavut's Liquor Task Force.

'As foolish as meeting in this tiny room'

Others spoke words of sadness and caution in personal stories.

“If you’d seen and heard what I’ve seen and heard, this would be a no brainer,” said Wes Smith. “I think I’m a strong man, but there’s times I still sit down and cry for what I’ve heard.”

Lew Phillip, a former RCMP officer and past warden of the Baffin Correctional Centre, warned that Iqaluit’s transient population wouldn’t see the problems left behind by the proposed store.

Rev. Mike Gardener said he had buried too many people due to alcohol, and liberalizing beer and wine sales would be a bad idea.

“It’s as foolish as meeting in this tiny room,” he said.

Markoosie Arsenault-Papatsie was one of just three people who spoke in favour of opening a beer and wine store.

“Obviously the liquor establishments aren’t going away anytime soon,” he said. “Neither are the bootleggers.”

Janet Brewster did not deny the harms of alcohol abuse, but says it's time for people to be more responsible.

Last night’s meeting was not intended to make any decisions. The information gathered from the public will be taken back to cabinet for further discussion.

The proposed beer and wine store would not open before summer 2015.