A large, agitated beaver attracted a crowd in Fort Smith, N.W.T., this week when it meandered through town and got hissy with a German shepherd. 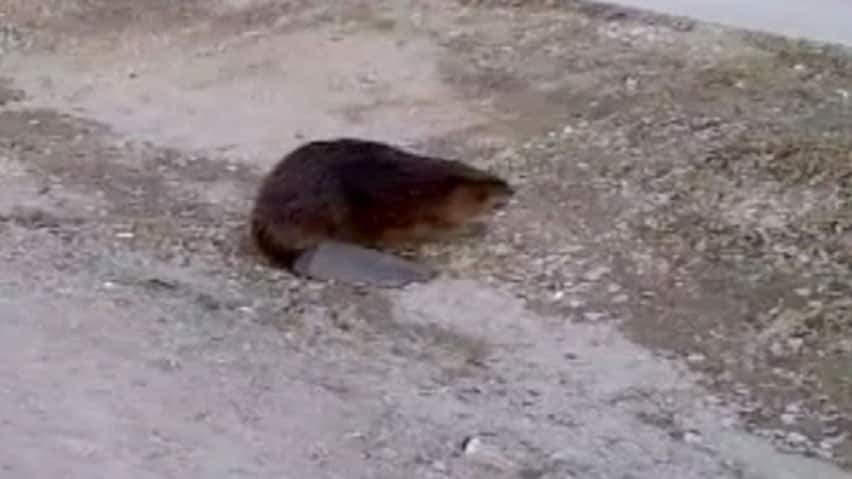 A large, agitated beaver attracted a crowd in Fort Smith, N.W.T., this week when it meandered through town and got hissy with a German shepherd.

The beaver was spotted Monday evening wandering around a residential neighbourhood, along a busy street, through a graveyard and golf course, all the while escorted by an N.W.T. Environment and Natural Resources officer.

Mike Keizer, a longtime resident in the town of 2,400 near the N.W.T.-Alberta border, said he hopped on his bicycle as soon as he heard there was a beaver on the loose.

"It looked huge. I always thought beavers would be smaller," Keizer told CBC News on Thursday.

"All the beavers I've ever seen have been in water, so you only ever see pieces of them; like, you don't get to see the whole beaver."

Another Fort Smith resident, Jason Mercredi, shot video footage of the beaver moving in a ditch and on a sidewalk along McDougal Street.

"There's a beaver holding up [the] main street," Mercredi says in the video, before asking his uncle if the animal would attack.

The wayward animal, which Keizer estimated was the size of a dog, zigzagged across people's lawns and around their homes.

"Every time it got agitated or flustered, it would bang its tail on the ground. I mean, I was amazed at how fast it moved when it was agitated," he recalled.

"It never backed down once. It grabbed the fence, it was hissing, and the dog was barking," Keizer said.

"When the ENR officer went to get it turned [around] so he'd get it away from town, he had a plywood sheet in front of him, and it rushed the sheet."

Keizer said he rode his bike ahead of the beaver, knocking on residents' doors and warning them to bring their dogs indoors "because there's a wild beaver walking through town, heading your way."

"While I was there, all kinds of people were driving up in their trucks and their cars and taking pictures," he said.

The beaver wandered about another kilometre or two before it headed towards the Slave River rapids and disappeared.

Keizer said in his 17 years living in Fort Smith, he has never seen a beaver — never mind a beaver so large — come into town.