Three of the six people who were on board an Air Tindi plane forced to land on Great Slave Lake Thursday say they're fine and very relieved. 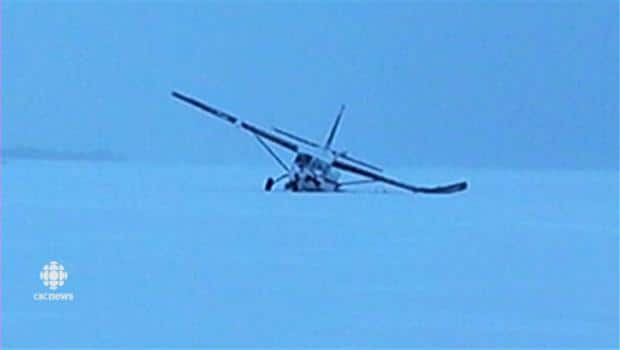 Three of the six people who were on board an Air Tindi plane forced to land on Great Slave Lake Thursday say they're fine and very relieved.

The flight had left Yellowknife and was heading to Fort Simpson when the pilot turned around and then made an emergency landing on the lake ice about an hour before sunrise.

Passenger Louie Bethale says he knew the plane was in trouble; he could hear ice hitting the windows and the aircraft started making beeping noises.

The impact of hitting the ice broke a wing and damaged the plane's undercarriage. It skidded hundreds of metres.

After the plane stopped moving, Bethale says he went outside to test the ice.

He says the group walked to a nearby island and huddled together around a fire, waiting for help to arrive.

Air Tindi president Al Martin says the airline and the Transportation Safety Board will be looking at every angle in their investigations from the aircraft to the pilot's role.

"We're really very happy obviously that no one was badly hurt," he said. "But we need to understand what happened and get a level of comfort that we understand that we have the controls in place to provide the safe service we aim to do all the time."

​Martin says it's too early to know exactly what happened. He said typically when it's icy the airline flies its larger planes.

It's the pilot's responsibility to check Nav Canada's weather forecast and make the final call about taking off.

"From all indications we weren't expecting the icing, obviously he encountered," he said.

"Talking to him this morning, the plane was dry, clear. All ready to go. He did spend time consulting the weather and getting the information but didn't have an indication at that point."

Meanwhile, Bethale says he'll be driving home to Fort Liard and won't be getting on a plane for a while.

With its four Cessna Caravans now grounded, Air Tindi is flying larger planes such as Twin Otters on its scheduled routes.

The Cessna that landed on the lake is still out on the ice, resting on its side where it stopped. The airline says it expects to transport the damaged plane back to Yellowknife over the next few days.

They're still determining how thick the ice is and figuring out how to recover the aircraft. It may require removing the wings and slinging it back by helicopter.