Nipigon River Bridge: By the numbers

The newly constructed Nipigon River Bridge — which remained partially closed Monday after a piece of decking lifted — cost $106 million to build and is crossed by some 1,300 commercial vehicles every day.

Troubled bridge near Thunder Bay, Ont., cost $106M and is crossed by 1,300 commercial vehicles per day

Cutting the Trans-Canada Highway's only route between Western and Eastern Canada, the new Nipigon River Bridge northeast of Thunder Bay, Ont. was closed on Sunday after its west side pulled away from the abutment on the river bank and lifted approximately 60 centimetres.

A single lane of the four-lane bridge reopened Monday morning to cars and regular-weight transport trucks. The lane is alternating between eastbound and westbound traffic, with a pilot vehicle leading the way.

Here are some important numbers about the bridge in light of its closure:

Cost of construction. Started in July 2013, the bridge was built to replace a two-lane span crossing the same river, and partially opened in November 2015.

It is the most expensive bridge project in Ontario to date. Municipal and provincial government officials expressed hope that, as the first cable-stay bridge in the province's highway system, it would become a tourist attraction.

Michael Gravelle, the provincial minister of northern development and mines, said when construction began that the bridge would be a "magnificent structure" and was "sure to become a destination attraction in its own right."

The number of commercial vehicles that crossed the old, two-lane bridge on an average day, according to a 2012 Ontario Ministry of Transportation (MTO) survey. Eighteen per cent were transporting food, 14 per cent carried manufacturing goods and 15 per cent were empty.

The approximate extra distance added to a Toronto-Thunder Bay road trip by crossing through the U.S. That's about 50 kilometres farther than the distance between Calgary and Edmonton. With a maximum state speed limit of 70 mph (roughly 113 km/h) in that region of the U.S., that's an additional three hours spent on the road.

The average total weight of goods transported across the old bridge per day in 2012, according to that same MTO survey. That's the same weight as more than 1,100 large African elephants.

The average total value of commercial goods driven over the bridge on a daily basis, according to the MTO. The delivery of such goods would have been significantly delayed Sunday and early Monday, as truck drivers faced the choice of waiting for the bridge to reopen or taking a long detour south of the border.

The wait time for vehicles to cross the bridge as of Monday at 2:30 p.m., according to MTO spokesman Bob Nichols. 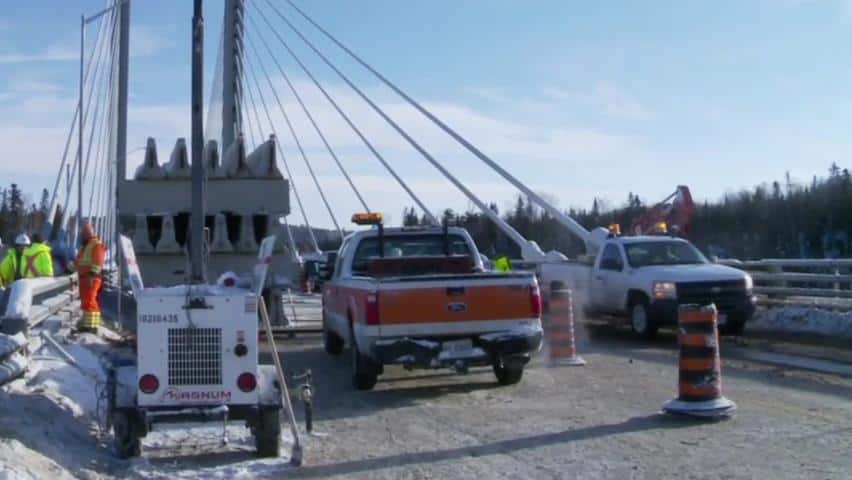