Former premier Danny Williams says the effort to bring the AHL's Manitoba Moose to Newfoundland and Labrador is perilously close to failing. 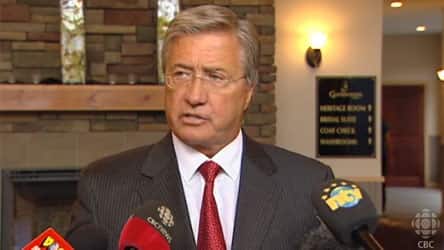 11 years ago
Duration 13:36
Danny Williams is still holding out hope that the Manitoba Moose may move to this province when they leave Winnipeg.

Former premier Danny Williams says the effort to bring the AHL's Manitoba Moose to Newfoundland and Labrador is perilously close to failing.

With an NHL team returning to Winnipeg and the Moose looking for a new home, Williams said it's now or never.

"It'll be a very, very short timeframe. This could slip away from us very easily," he said.

St. John's was the frontrunner to win the team from Winnipeg but Williams said  the odds of that happening have reduced since the province rejected St. John's Sports and Entertainment's request for a $500,000 anuual subsidy.

SJSE is the group that runs the Mile One Stadium in St. John's.

"The franchise fee, plus the city lease arrangement, plus the travel; those three items are in excess of $3 million," said Williams.

"So they're very, very important. If we can't nail those down and lock those away at reasonable prices, then this doesn't happen."

Williams said that if nothing changes he's is on the hook for all that money but he is trying to find other ways to pay for the team.

"If $500,000 is out of the equation then we have to find it either through corporations or tickets or in some other manner. In my own opinion, I'm putting my own money in here. The risk is significant," he said.

Williams expects he'll have to give the Moose an answer one way or the other, within days.

Meanwhile, the group that runs Mile One is working up a second, more comprehensive subsidy proposal for the provincial government to consider.

The province rejected St. John's Sports and Entertainment's request for a subsidy last week after considering it for a day.