Cleanup is continuing after weekend flooding overwhelmed infrastructure and caused several western Newfoundland communities to declare a state of emergency.

The cleanup continues in western Newfoundland today after weekend flooding overwhelmed infrastructure and caused several communities to declare a state of emergency.

A large divided section of the Trans-Canada Highway at Little Rapids washed out in both directions on Saturday, and the stretch of highway is now down to one temporary lane as crews work to repair the large gap created by the floodwaters.

The province's transportation department says while traffic is moving, it will be several days before the four-lane highway is fully repaired.

Nearby at Pure Holsteins farm, the rush of water from the TCH damage overwhelmed a culvert and caused a road to wash out, dividing the farm property in two. 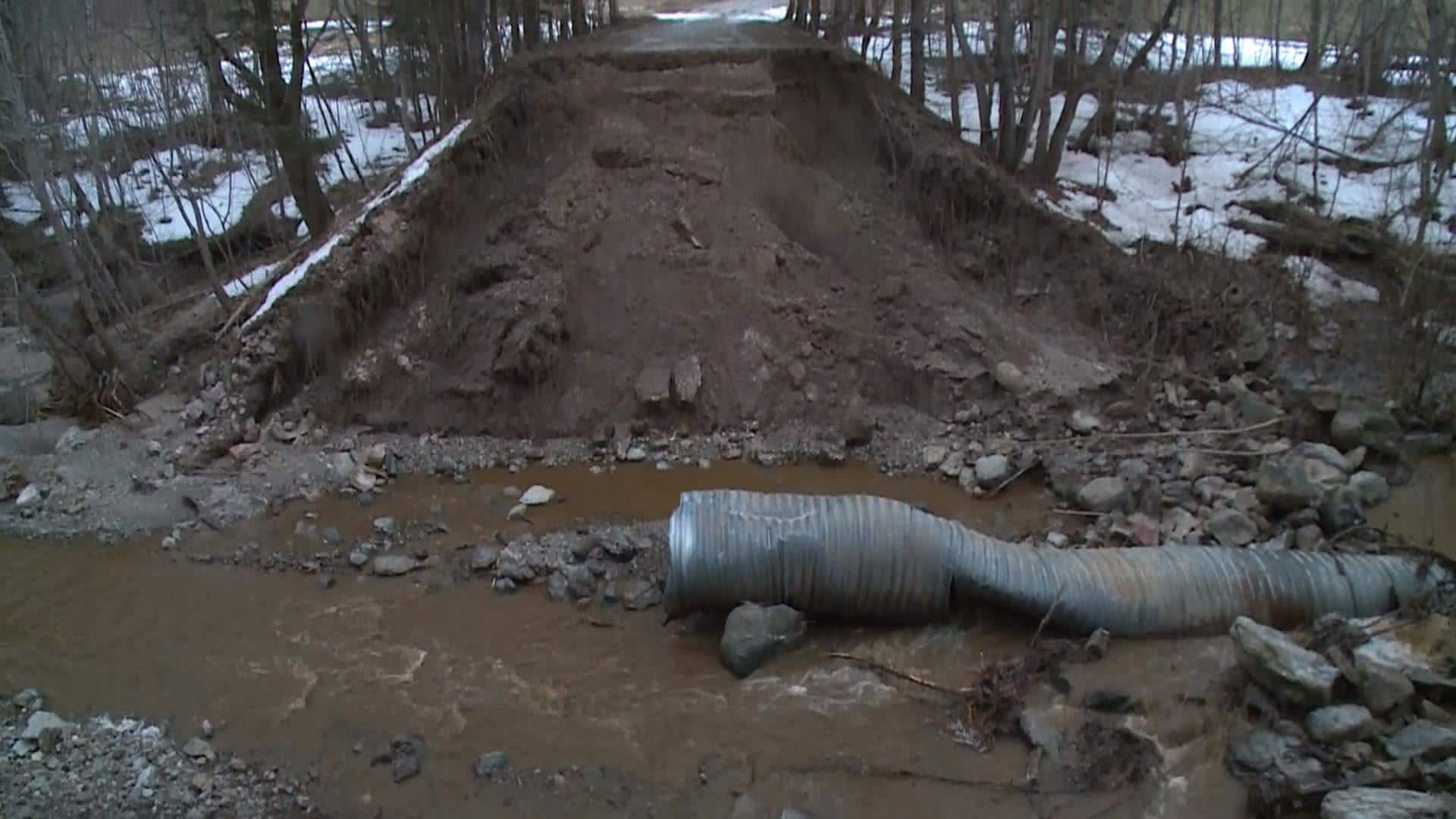 3 years ago
1:23
David Simmons, the owner of Pure Holsteins farm, show the CBC's Anthony Germain what's left of the road into his farm near Little Rapids. 1:23

Farm owner David Simmons said it's the second time in 15 years that the same section of road has washed out.

Corner Brook Mayor Jim Parsons said the region saw significant flood damage after Saturday's rain, but commended the work of city crews that have been busy cleaning up.

A restoration crew has been working to put temporary and permanent fixes in place on many of the roads and culverts compromised by Saturday's flooding.

"We've opened pretty much every road that was closed, to a certain extent," he told CBC Radio's Corner Brook Morning Show.

Parsons said he had to declare a state of emergency on Saturday, when heavy rain and snow melt created a flash flooding situation that overwhelmed drainage infrastructure and caused widespread damage to roads and peoples' homes and personal property.

"When there are concerns about getting first responders to emergency situations, our ability to make the roads safe, that's when we really had to make the call to declare the state of emergency," he said.

Some people had to be evacuated from their homes when it was determined emergency crews would not be able to access their homes safely if something were to happen.

Parsons said while many roads in the area were visibly damaged by the runoff, there are other less obvious areas that may not be stable, so people should use caution when travelling around town.

"A lot of it is invisible right now," he said.

Areas outside Corner Brook are still dealing with flood damage, including several sections of highway that washed out and cut off communities that depend on them.

Areas near Port au Choix on the Northern Peninsula were still without power Monday morning, which Newfoundland and Labrador Hydro said was caused by a cracked pole. Service is expected to be restored by noon.

This is the cracked pole in Port au Choix that our crew is in the process of replacing. The estimated time for power restoration is noon. Please stay safe! <a href="https://t.co/q3CHWiHI4t">pic.twitter.com/q3CHWiHI4t</a>

Humber-Bay of Islands MHA Eddie Joyce, also minister of municipal affairs and environment, said at least 70 homes in his district were badly damaged by the flooding.

Joyce said that in the case of the washout at Rattler Brook, on Route 450 which connects Lark Harbour and York Harbour, repairs to the road might not be complete until Tuesday.

One home in Benoit's Cove was mostly submerged early Saturday morning, when a nearby brook overflowed and started pouring into the bedroom of the elderly couple who live there.

The home is owned by the parents of Darrell Jesso, who is the deputy mayor of Humber Arm South. He was checking the water levels near the home throughout the night, and eventually had to rescue his parents and a pet dog from their room.

"We took them out one by one with the chest waders," he said. "By the time we got out of it I was tippy-toeing on my chest waders to get out of it. It was an ordeal. The house is totalled."

The Northern Peninsula town of Trout River was also still under a state of emergency Monday morning, after floodwater surrounded many homes and buildings in the community.

According to Deputy Mayor Gloria Barnes, the town's main wharf was partially destroyed, another wharf on Fisher Drive was completely washed away and some residents from the Riverside Drive area are still not able to return to homes due to risk of landslides and unstable ground.

Barnes said the state of emergency may be called off later in the day, but for now students can't return to school and town officials are monitoring the damage as water begin to recede.

"Everything was just flooded on the main road," she said. "There was just water and houses — there was no land."

When asked about the possibility of federal funding to assist with the cleanup, Joyce said it's likely that the cost of the damage has exceeded $1.6 million, which is when Ottawa will step in with financial help.

"I feel very confident that we will reach that threshold no problem," he said.

"We will be calling on our federal partners who have been there before with us in the past when this type of disaster has hit Newfoundland and Labrador."

With files from the Corner Brook Morning Show