A fisheries protest in spring? That's normal, but this one's quite different

Fisheries workers are anxious about working in conditions that could put their health at risk. That's a logical worry, writes John Gushue, given what's happened at other industrial food processing sites.

In the spring, Tennyson wrote, a young man's fancy lightly turns to thoughts of love. In "spring" in Newfoundland and Labrador, the public's attention turns to some racket in the fishery.

Earlier this week, there was an uproar in South Brook, Triton and Port aux Basques about out-of-province crab needing to be processed. The details this time were quite different from prior years — this would be the first time a pandemic prompted a protest — but the scenario may have seemed familiar.

Demonstrators showed up, made a scene and their point, the company (Ocean Choice, in this case) went to court, both sides put their cases in the court of public opinion, and a judge issued an injunction.

There have been other spring fisheries protests over the years, of course, which is why from a treetop level what played out for a few days this week may have seemed familiar.

When I looked in our database for words like "FFAW," "protest" and "demonstration," lots of results — dozens of them — came back.

It's not just the FFAW, too. Other groups have used similar techniques to command the attention of the industry, governments and the media.

Video from 2017, when protesters broke windows during an occupation in St. John's: 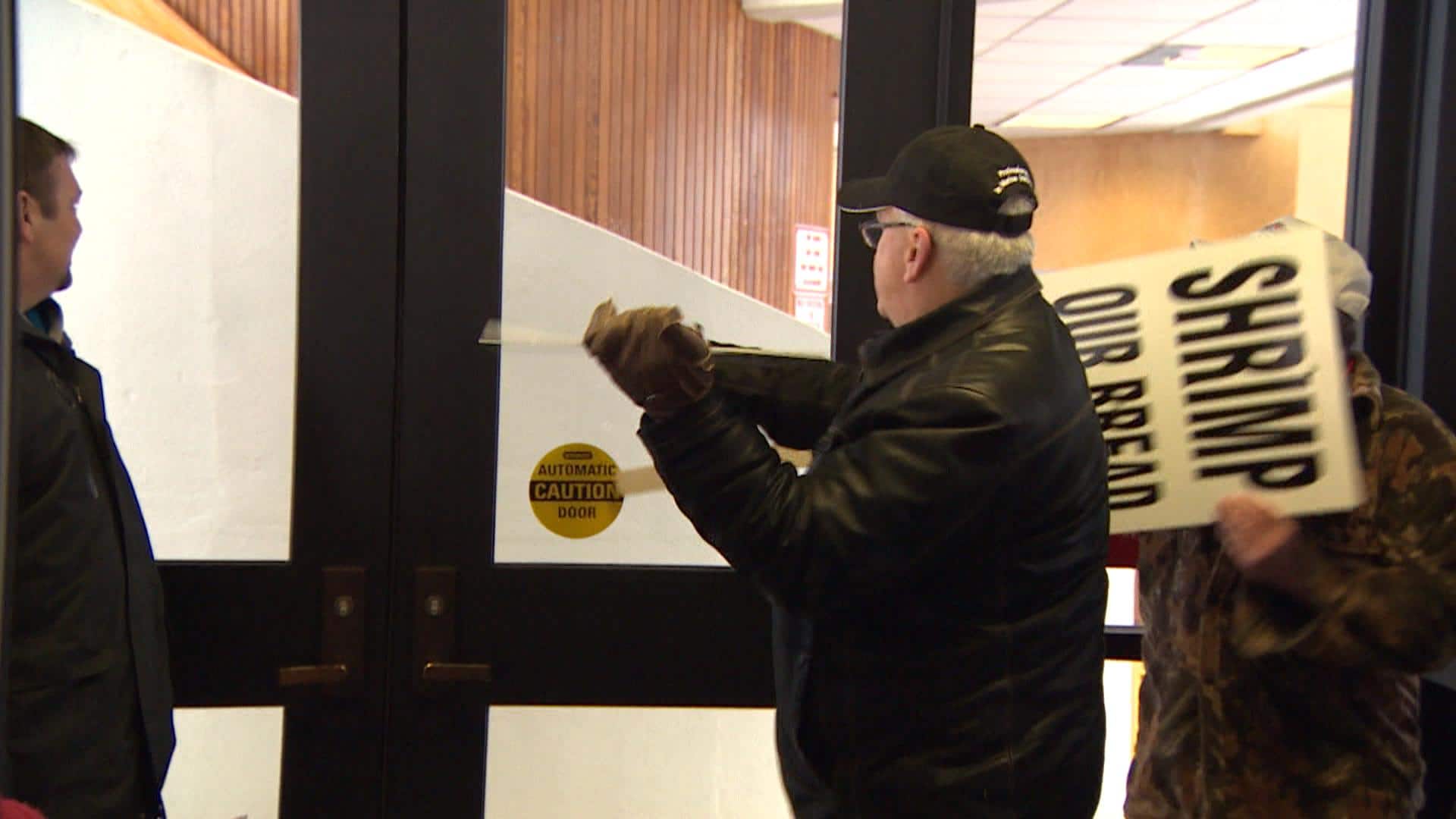 3 years ago
1:27
A group of shrimp fishermen kicked in a window and made their way into a DFO building in St. John's to protest quota cuts 1:27

Over the years, we've seen windows get smashed at DFO headquarters in St. John's, a hunger strike outside the same building, gear getting torched in Port au Choix, an occupation at fisheries offices in Corner Brook, a blockade in front of Confederation Building … there's been a lot.

It's no coincidence that most protests happen in April and May. The fishery in Newfoundland and Labrador is not a 12-month affair, and for shellfish, the clock starts ticking when spring starts. Crab needs to come out of the water before temperatures rise and shells turn soft in the summer, and unionized workers know companies have a limited window to make a good dollar. (In 2018, crab in this province had a landed value of just under $299 million.)

If you're a union and you're aiming for a goal, this is the time of year to do it.

Making noise has been a go-to plank of the FFAW's playbook for decades. Older readers will remember founding president Richard Cashin leading his members with a raised voice. His successor, Earle McCurdy, bookish by comparison, also knew how to get the attention of the public — and politicians and employers. Usually, the FFAW has been looking for a better deal for its members and workers, with a focus on money.

This time, though, the aim for current president Keith Sullivan was not so much money but safety.

With the clock ticking on the fishery — May 11 has now been set as the opening date for crab — many members of the FFAW are quite nervous about going to work. In harvesting, quarters on a boat are always tight. In a processing plant, work is typically done elbow to elbow, which means physical distancing will need to spread workers out around a defined space.

All that said, a number of people noticed an irony in the protest in the Triton area: to make their call for physical distancing in the workplace, FFAW supporters gathered together in a cluster.

Still, there is good reason for anyone working in industrial food production to be concerned.

In Alberta, the Cargill meat-packing plant outside High River has been shut down after a COVID-19 outbreak that is so serious, it's emerged as the largest single-site cluster of coronavirus in the country. The numbers are staggering: more than 1,200 people were infected, with 821 of them Cargill workers. One woman has died.

After being closed for two weeks, Cargill will reopen the plant Monday with one shift, a decision that union leaders described as "incredibly concerning."

South of the border, there are nothing less than scandals in how meat processors have forced employees to come to work, regardless of health warnings and then actual cases.

"If you're not in a casket, they want you there," Sonja Johnson, a former worker at a packaging and distribution facility owned by Smithfield Foods, told the Washington Post. "All they were worried about was making sure we were coming to work."

In this context, going into a fish plant — even in a province where active cases of COVID-19 have continually declined in the last month — must feel fraught for at least some workers.

"We've seen when they tried to jump the gun in Quebec on opening a seafood processing plant and we had infections," Sullivan said earlier this week.

"So we want to be as safe as we possibly can."

Another issue to be considered: the well-known demographics of the seafood processing sector. About 46 per cent of fish plant workers are 55 or older — that's more than double than in the rest of the provincial workforce. This is a cohort where pre-existing conditions that have clinical implications for coronavirus — heart and lung issues, diabetes, immune-compromised conditions — are more likely to be present than younger workers.

Navigating this path — keeping alive a billion-dollar industry that sustains dozens of rural communities, while also keeping healthy the people who keep it running — will require considerable effort.