Emotional return to N.L. for Tamils rescued 30 years ago

There were hugs and tears Thursday in Admiral's Beach as a group of Tamils who were found adrift in St. Mary's Bay 30 years ago returned to the area to meet their rescuers. 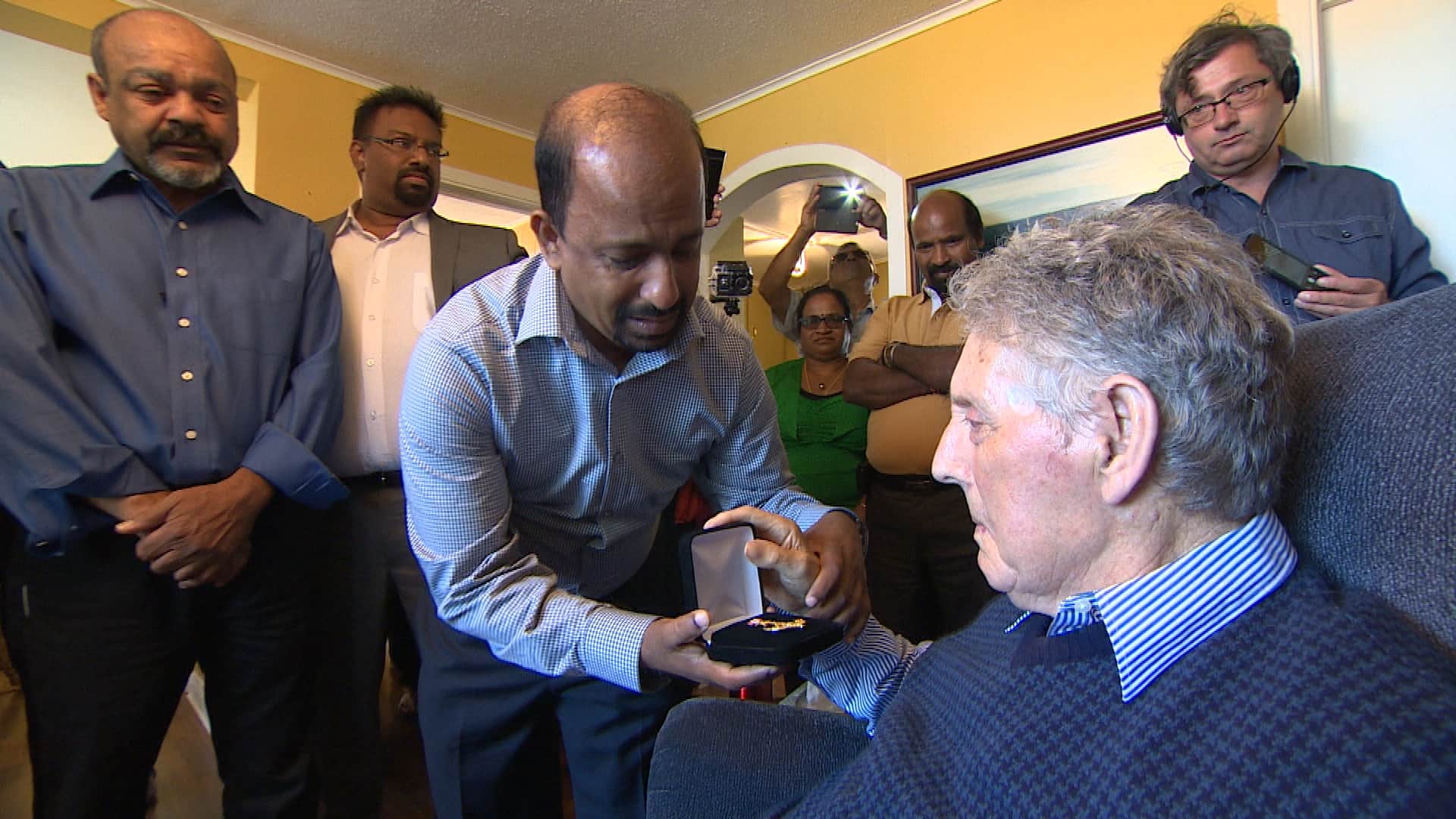 4 years agoVideo
2:03
There were hugs and tears in Admiral's Beach, N.L., as a group of former Tamil refugees, who were found adrift in St. Mary's Bay 30 years ago, returned to the area to be reunited with their rescuers 2:03

There were hugs and tears Thursday in Admiral's Beach as a group of former Tamil refugees, who were found adrift in St. Mary's Bay 30 years ago, returned to the area to be reunited with their rescuers.

The drama — then and now — is being made into a film by documentary maker Cyrus Sundar Singh, who accompanied former refugees and their families to Newfoundland.

The return journey started in Holyrood, where the group saw the lifeboats that brought them to the province on Aug. 11, 1986, a sight that was overwhelming for some.

Four of the Sri Lankans visiting Thursday were among 155 Tamils found adrift near St. Shott's by a local skipper, Gus Dalton.

The "boat people" had sought freedom on a cargo ship that dumped them about 300 kilometres off the coast of Newfoundland, and by the time Dalton's crew discovered them three days later, they were dehydrated and starving.

It was Dalton they most wanted to see Thursday, and they and assorted family and friends crammed into his Admiral's Beach home to pay homage.

"Thank you for saving our lives. Thanks a lot, thanks a lot," they said one by one, as the group presented Dalton with a gift — an anchor-shaped pin.

"You're the one who pulled me in the boat first," said Puvanendran Shanmuga. "I still remember the cup of water you gave."

Dalton, who's getting on in years and has difficulty talking, was happy to see the Sri Lankans. "I'm glad they come," he said.

"I was just amazed that they remembered, that it means so much to them," said Dalton's daughter, Bernadette Dalton.

"They never forgot who picked them up and who welcomed them to Canada when they first arrived."

She said her father never doubted that helping was the right thing to do.

"It sort of reflects who Dad is, I think. He's always been welcoming. He's been there for everybody," she said.

Most of the Sri Lankans settled in Montreal and Toronto. The group that returned to St. Mary's Bay on Thursday said one of the four children rescued, who was six months old at the time, is now a doctor. Another is an engineer.

The visit to Newfoundland also included a tour of the coast guard ship Leonard J. Cowley, which brought the Tamils to St. John's in 1986, and a meeting with the assistant commissioner for Atlantic Canada, Wade Spurrell, who was a junior crew member on the Cowley 30 years ago.

With files from Mark Quinn and Todd O'Brien