Swimming with Whaley the beluga could cause more harm than good, DFO scientist says

Hanging out with the beluga whale kicking around Grates Cove may not be as harmless as first thought. 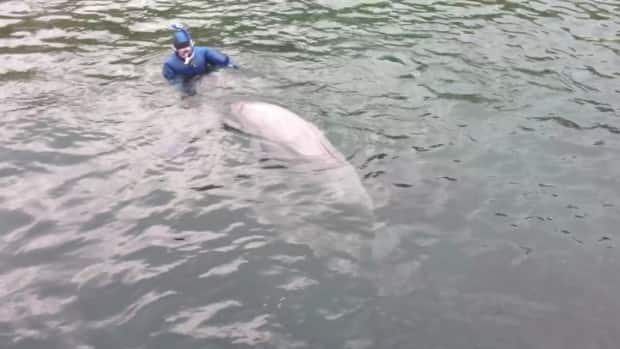 5 years agoVideo
0:27
A DFO scientist says swimming with Whaley the beluga could cause more harm than good. 0:27

Hanging out with the beluga whale swimming around Grates Cove may not be as harmless as you might think.

For the past three weeks, a beluga nicknamed Whaley has been entertaining visitors to the community.

However, Jack Lawson, a research scientist with the Department of Fisheries and Oceans, says interacting with the beluga may have far reaching consequences for both the swimmer and the whale.

"We know a number of marine mammals species carry things like the bacteria brucella, which can be transmitted to humans and it can cause brucellosis, which is a potentially fatal illness if you don't treat it."

"When I see people sort of so close to animals and handling them and sort of inhaling the blow, I cringe a little bit because it's not something I would recommend," said Lawson in an interview with The St. John's Morning Show.

The beluga is likely only in Grates Cove because it's been separated from its mother.

While the beluga may gravitate to humans and boats because it enjoys the company, doing so might put it in danger.

"Often the fate of these solitary individuals isn't a good one," Lawson said.

"Either they're injured or killed by interactions with vessels or people or sometimes they might be taken by sharks or killer whales because they're a lone individual,"

The safest thing to do, Lawson says, is to watch the whale from afar.

"It's a great opportunity to see an animal watching it from the wharf or from a boat if it's passing by, but I really wouldn't recommend people be swimming and handling the animal."