My bun, her oven: St. John's woman becomes mom, thanks to sister

After 10 years of trying, Karen and Chris Lester are finally holding their newborn baby girl, thanks to Karen's sister Lisa.

After 10 years of trying, Karen and Chris Lester are finally holding their newborn baby girl, thanks to Karen's sister Lisa.

All three were in the St. John's delivery room when Eva Theresa Mae Lester was born Dec. 14 in what Karen Lester called the "best gift," after a decade of infertility and disappointment.

"We tried on our own for a little bit first and then we did some treatments locally but we don't have IVF [in vitro fertilization] in the province. So we went away a couple times to Calgary and then to Ottawa, and we didn't have any success."

Thousands of dollars later, the Lesters were ready to give up.

"Physically, emotionally, I was just kind of exhausted and I said I can't do this anymore," said Karen Lester.  "We had three embryos left, so my sister said, 'I'll do it, I'll try.'"

Lisa Richards, 37, agreed to be a gestational surrogate.

"I was pretty sure that they were going to be good parents and you know, they deserved it," Richards said.

"There's a lot of drugs that have to happen ahead of time, she had to have daily injections into her buttocks that her husband had to put in for her," said Lester. Her sister also had to travel to Ottawa to have the embryos implanted.

The first attempt in December 2015 didn't work. Another try, on April 5, led to better news.

"We only had two embryos left so we asked the fertility clinic in Ottawa would they be willing to put the two embryos in, and a Hail Mary pass, last attempt, and it worked, one took," said Lester.

Richards has two children of her own — a five-year-old boy and a two-year-old girl.

For most of the pregnancy, she lived in Nova Scotia but moved to St. John's, putting her son in school there, for the month before her delivery date.

"You know, her and her entire family, her husband and her kids, to put their family on hold to help us create ours is the best gift we're ever going to receive," said Karen Lester.

Now that baby Eva has arrived, they say Richards is a No. 1 aunt, a role she embraces.

"To me it never felt like it was my pregnancy or my baby," said Richards. "I couldn't wait to hand [her] over."

Karen and Chris Lester are high school sweethearts, and have been together about 22 years.

To put their family on hold to help us create ours is the best gift we're ever going to receive.- Karen Lester

After their years of trying for a child, they were almost afraid to hope until Eva was born.

"I think after eight or nine years of getting bad news it might have robbed a little bit of pleasure," said Chris Lester. 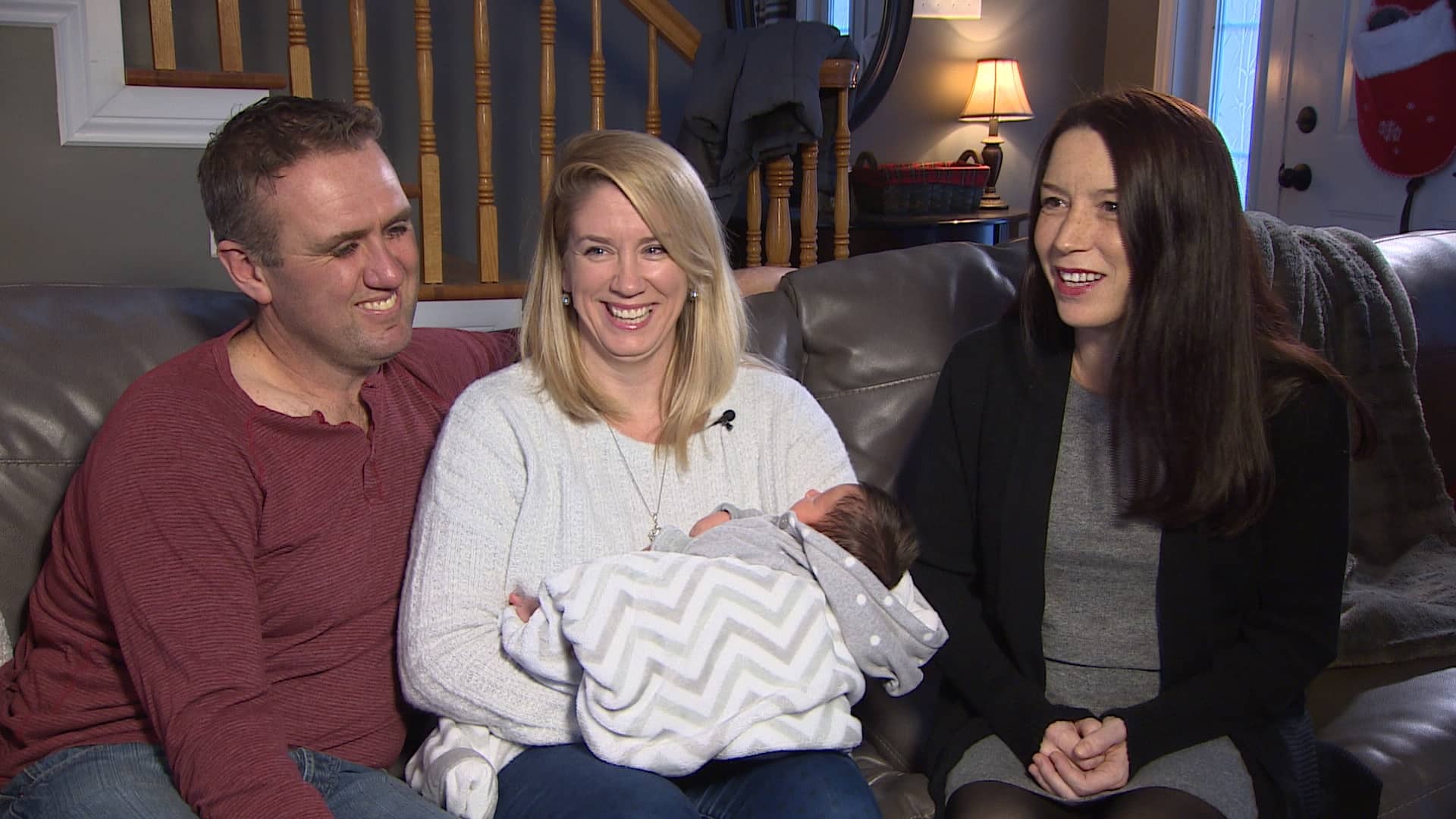 This Christmas one sister gave the gift of motherhood

4 years agoVideo
1:17
Karen and Chris Lester have been trying to have a baby, and with the help of Karen's sister Lisa Richards this year, they got one. Lisa was a gestational surrogate, and brought Eva Theresa Mae Lester into the world on December 14. 1:17

"It's probably only recently that we fully let ourselves believe and enjoy that we're actually going to be lucky enough to have this happen to us," he said.

"Fortunately it worked out for us."

Alyson Samson is a journalist working with the CBC in Newfoundland and Labrador.