Germany's unconditional surrender to the Allied Forces on May 7, 1945, ended the Second World War in Europe.

It had been almost six long years — and the war itself wouldn't come to its conclusion until almost four months later with the capitulation of Japan.

But on May 8, 1945, people around the world were ready to celebrate with the declaration of Victory in Europe Day — VE-Day.

The word arrived in St. John's at 10:30 that morning. The siren atop the Newfoundland Hotel began to wail. This was the same siren that had sounded over the city every Thursday morning since 1939, reminding citizens that they were at war.

But now, peace — at least on one front. And the celebrations began.

St. John's was a frenzy of excitement — sirens screamed, church-bells peeled, the whistles of all ships in the harbour sounded persistently, exultant motorists drove through the crowded streets with hands pressed constantly on their horns, flags and bunting streamed from nearly every house and and the business section was ablaze of colour; children waved the emblems of the United Nations as they joined the happy throng.

The Broadcasting Corporation of Newfoundland's radio station was located in rooms on the top floor of the Newfoundland Hotel.

That morning, announcer Aubrey MacDonald suspended a microphone outside the studio window to broadcast the clamour coming from the streets below.

"You are hearing the rejoicing, the unabated rejoicing of our people in St. John's which has followed spontaneously the great announcement by Prime Minister, Mr. Winston Churchill, that the war in Europe has ceased in an Allied victory," said MacDonald. "Listen to the whistles, the steamers, the church bells, as our people greet them in great jubilation."

For three minutes, listeners heard a cacophony of car horns and church bells. 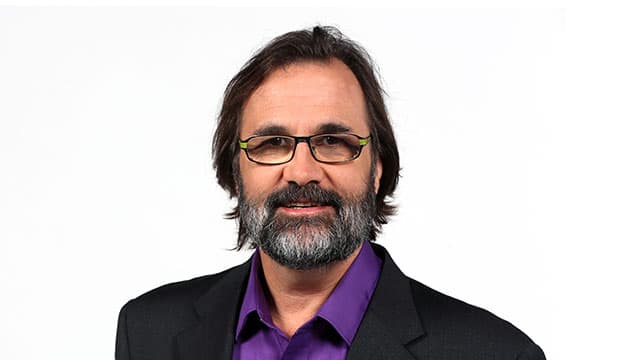 Here and Now6:00Aubrey MacDonald VE-Day 1945 celebrations in St. John's (excerpt)
The Broadcasting Corporation of Newfoundland hung a microphone outside its St. John's studios to records the celebrations 6:00

All models of cars— from the most ancient to the latest streamliner — drove through the crowded streets, most of them filled to capacity with cheering citizens.

"The town is bedecked with bunting. Flags are flying. And just now, our people are releasing the pent-up emotions in a torrent of joyous emotion. The war in Europe is over," MacDonald declared: "Listen to our people show their feelings."

Another three minutes pass. Ships' horns blasted from the harbour. Whistles blew. The excitement was palpable.

One noticed children, barely old enough to realize something great, something miraculous, had been accomplished, waving the flags of the United Nations as they joined in the parade of celebration. Although most of them were still to attain their 'teens, they were sufficiently versed in uniforms to recognize the khaki of our Artillery home on furlough. Servicemen were halted in the streets, firm handshakes were exchanged, pedestrians shouted to one another above the clamourous din of Victory, unashamed tears of gladness stood in the eyes of many — yes, indeed, St. John's was happy!

"People of nearly every Allied country are taking part in this great celebration today in our city. Men, women, and children are celebrating in a great spirit of unabated joy. The jubiliation continues. The celebration is on. There is an aura of complete, unadulterated relief in the spontaneous outburst and the feelings that have so long been pent up are now being released in a torrent of job. But with all, the predominant note is one of thankfulness — thankfulness to the Almighty who in His divine mercy, has blessed our arms," he said.

Back to the microphone dangling outside the window — for four minutes, a crescendo.

It was undoubtedly Newfoundland's happiest day since September, 1939. But there was more than rejoicing, there was thanksgiving, thousands wending their way to the churches where in prayer and praise they gave thanks to Almighty God for victory over the enemy and the end of the war in Europe. It was a great and glorious day and one long to remember.

As the archival sound recording of the broadcast ends, MacDonald introduced — in tribute — a selection of anthems and songs of the Empire, its colonies, and the Dominions — including Canada.

"We begin," he said, "With the national anthem of our own Newfoundland — Britain's oldest colony — whose sons fought so well and so valiantly and whose patriotic people contributed so much in work and money and toil towards the winning of this long, arduous war."

CBC News is compiling and sharing Canadians' memories about World War II. Use the hashtag #CBCVE70 to tell us your story about VE-Day.

Christine Davies has worked with CBCNL for more than 30 years and is currently an Associate Producer in the St. John's bureau.