Travellers at St. John's International will now be able to enjoy the sounds of piano playing echoing through the airport, after Atlantic Canada's first street piano was unveiled Tuesday morning. 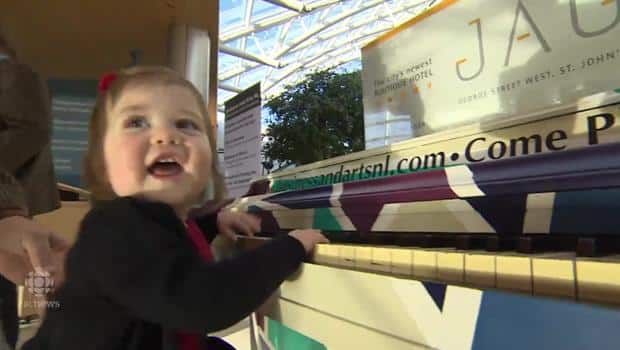 Travellers at St. John's International will now be able to enjoy the sounds of piano playing echoing through the airport, after Atlantic Canada's first street piano was unveiled Tuesday morning.

The piano is part of an initiative of Business and Arts Newfoundland and Labrador as part of their Come Play With Me project.

John Fisher, CEO of Business and Arts N.L., said it's all about getting people more connected to the arts.

"There's a thousand of these street pianos, as they're called, around the world but we didn't have any in Newfoundland and Labrador. In fact, we don't have any in Atlantic Canada," said Fisher.

The piano now at the airport was donated by Steele Hotels, and given a funky makeover by artist John Fong.

Players Abigail Schwartz and Timothy Brennan were the first to tinkle the ivories, and soon the sound of music started working its magic on some weary travellers.

Rahim Nekoeian said he and his family were pleasantly surprised by what they heard at the airport.

"We heard this music and this is actually like a refreshing day here for us. Before travelling, you have so much stress before travel, but you wait here for some minutes and just hear this music, and you're feeling, like, relaxed," he said.

Traveller Jen Hanley said she thinks it's a great idea to have a free-to-play piano in some public spaces.

"I think it's fabulous because anyone can sit down and play and add to it — I know there's a lot of videos and stuff online of such things in New York. I think it just adds to the aural space for everybody," she said.

Business and Arts N.L. said it hopes to get similar pianos set up in different public places across the province.