Not guilty verdict for Doug Snelgrove leads to explicit graffiti in St. John's

After the jury's not guilty verdict in RNC Const. Doug Snelgrove's sexual assault trial, the officer faces harsh judgement in the court of public opinion and further discipline.

After the jury's not guilty verdict in the sexual assault trial against Royal Newfoundland Constabulary Const. Carl Douglas (Doug) Snelgrove, the officer faces harsh judgement in the court of public opinion and further discipline from the RNC.

By Saturday afternoon, explicit graffiti – including threats against Snelgrove's life – was plastered throughout downtown St. John's showing the strong and heated opposition to the jury's not guilty verdict.

Snelgrove, 38, a 10-year veteran of the RNC, was charged with sexually assaulting a woman shortly after giving her a ride home from downtown in a police cruiser in 2014.

He was on duty and in uniform at the time.

​Justice Valerie Marshall said the case hinged on whether the complainant, who was 21 at the time, had consented to sex or was in a position to consent, and whether Snelgrove knew if she did not or could not consent.

​Within hours of the verdict, protests began outside the Supreme Court of Newfoundland and Labrador in St. John's Friday night as demonstrators chanted and held signs outside the courtroom doors.

Signs of the protest remained visible Saturday, as coffee and egg residue stuck to the courthouse.

'Impact on the justice system'

Criminal lawyer Bob Buckingham said the reaction to the verdict is concerning with protesters spraying graffiti and damaging public property.

"I've a major concern with what I call a mob mentality response to an informed jury decision, which is disappointing," said Buckingham.

"My concern is more with the impact on the justice system."

Justice Minister Andrew Parsons tweeted a reference to confidence in the judicial system Saturday afternoon, but was not available for comment about it to CBC News over the weekend.

Protesters have planned another demonstration for outside the RNC headquarters in St. John's at 12 p.m. Monday. 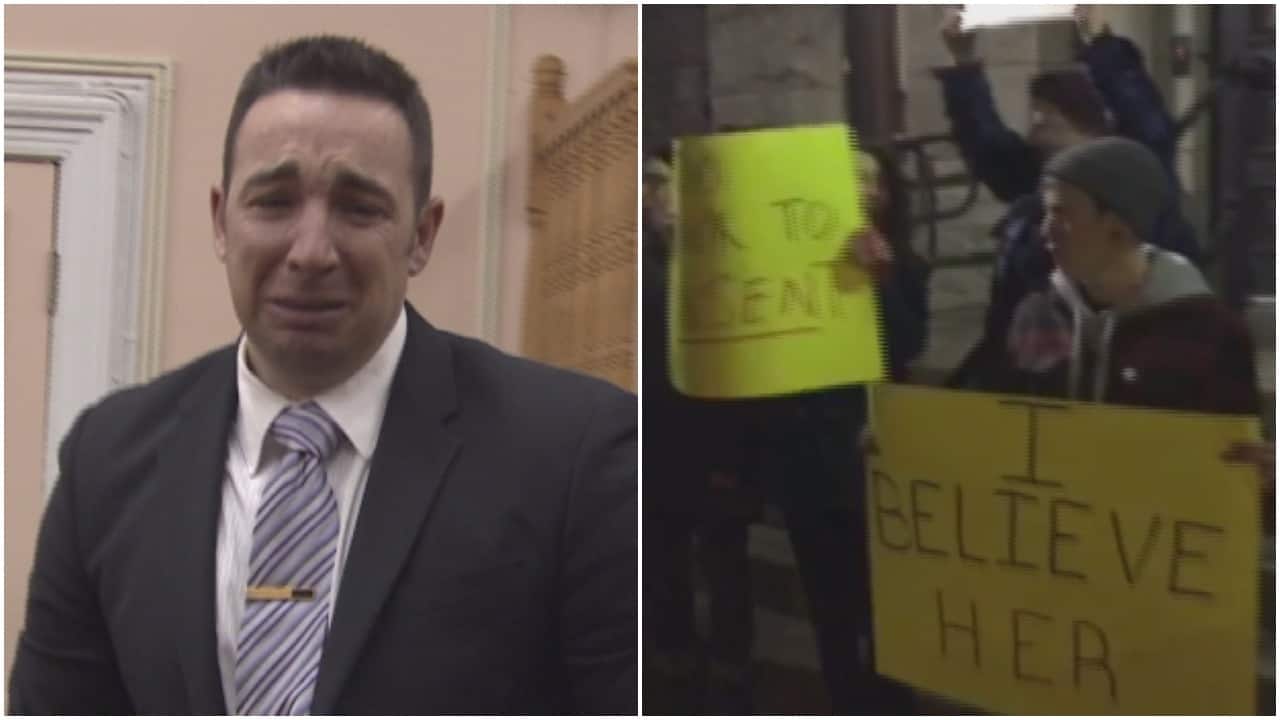 Snelgrove also has yet to face full discipline from the RNC following the incident.

In a statement released Friday, RNC Chief William Janes said the Crown has 30 days to file an appeal and following any appeal, the appropriate discipline will be determined through the public complaints commission process.

Janes also said Snelgrove has been suspended from all duties, without pay, since charges were laid in 2015, and will continue to be suspended until appropriate discipline has been determined.

He said the RNC does not tolerate inappropriate and unprofessional behavior by officers and supports victims of sexual assault.

"We encourage any person who has been the victim of a sexual assault to come forward; all complaints will be thoroughly investigated."