John Ford was a man of honour, service, and family. He had the conviction of a man who knew his own mind, who spoke it freely, and one who had every reason to carry through his life a great resentment for what had been done to him… and yet, in the end, he didn't, writes Reg Sherren. 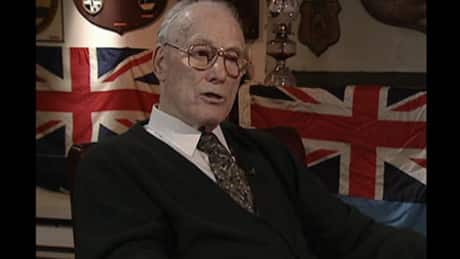 7 years agoVideo
21:58
Sixty-five years ago, an atomic bomb was dropped on Nagasaki. In a flash, tens of thousands of people were dead. Canadian John Ford was watching from his prison camp. He eventually came home to Newfoundland. But more than half a century later, still haunted by what had happened, he decided to return to Nagasaki. 21:58

John (Jack) Ford was a man of honour, service and family. He had the conviction of a man who knew his own mind, who spoke it freely, and one who had every reason to carry through his life a great resentment for what had been done to him… and yet, in the end, he didn't.

I first met John when my father introduced me to him, then in his 80s, a proud Newfoundlander who had the distinction of serving for his country in World War II. As a member of the British Commonwealth, he signed on to serve with the British Air Force in 1940. Don't forget, at the time, Newfoundland was still a country.

He was barely 21, a young man working with the railroad, from Port Aux Basques. He left his girl Margaret behind, thinking he would be back in a year, not much more. Instead, he was gone for six years, into a war that would change him forever.

As a flight engineer, he found himself in far off Singapore. Faced with the overwhelming might of Japanese forces, he and many more like him were forced to capitulate and became prisoners of war.

Fate brought him to Nagasaki. For three years, he was systematically beaten and starved, working as a slave labourer in the Mitsubishi dockyards. The conditions were brutal.

One by one he watched his comrades fall, until one day he looked up to witness what he thought was the end of the world: 70,000 people killed in the instant of an atomic explosion, and many more would die in the aftermath.

John, as fate would have it, survived. When we met he was one of the last, now a Canadian, to have witnessed such inhumanity first hand.

A return to Japan

When we met, and I discussed with him the possibility of returning to Nagasaki, I wasn't sure how he would react. John Ford owned no Japanese electronics, had never owned a Japanese car, and as he said to me, he had no particular love for the Japanese either.

But he also said this: "I have no abiding hate for them either.”

Over the course of several months, I got to know a man of great civility and learned, to my great surprise, that his wife Margaret had actually gone to school (Grade 5) with my grandmother on the tiny island of Ramea. John agreed to travel with me back to Japan.

Remember now, he was in his 80s, and he had not set foot in Japan since being liberated.

Now I know many people don't believe in such things, but John told me as a young lad of 14 or 15, he had a dream that the Japanese were landing on the shores of Port Aux Basques and he was fighting them in a great war. This came to pass.

The day we arrived in Nagasaki, after settling John away for a rest (it was a long two-day journey, many hours in the air), I went for a walk to clear the cobwebs. As I turned the corner from our hotel, I ran smack into a Japanese man walking two large Newfoundland dogs. It was one of many things that occurred over the next few days that were, quite simply, uncanny.

The next day we were on the water, in the harbour, on a little cruise boat that toured around. This night, the boat was entertaining some Korean businessmen — there, as it turned out, doing business with the local shipyard.

John had shown me where the bomb dropped, about seven kilometres from the POW camp, probably why he had any chance of survival. As we passed the dockyard, John saw a cruise ship under construction. "Has that ship been on fire?" he asked me. I said I didn't think so, it was still under construction. There was some black primer paint on the side.

It turns out that very evening, the head of the Mitsubishi Dockyard was also on board our little vessel, taking care of those Korean businessmen. My good friend and cameraman Keith Whelan had struck up a conversation with him.

When the man learned who John was, he insisted on sending a car to pick us up the next day, inviting us to lunch and a tour of his facilities. As we walked around the place where John was enslaved, all John wanted to talk about was the cruise ship he had seen the night before.

Once again he asked, “Has this ship been on fire?" The manager assured him it had not, was under construction, and was going to be one of the biggest cruise ships ever built.

Two weeks after we returned, that very ship caught fire in Nagasaki harbour.

It took us some time to find the old POW camp. A lot of land had been reclaimed. The site was now a junior high school.

We got lost. And yet, as we pulled into the schoolyard, I glanced up at the clock on the outside of the building. It was 11:02, the exact time the atomic bomb decimated Nagasaki.

There was no sign, no plaque, no indication anywhere to mark the history that ground held. In fact, nowhere in Nagasaki was there any remembrance of the roll the Japanese played in the disaster that was exacted on the people living there. It was unusual when you consider Nagasaki had fashioned itself as a world centre for peace and nuclear disarmament. The city had a history but, it seemed, a selective memory.

I put John together with a gentleman named Koichi Wada. He was very kind, and invited us back to his home, up in the hills around the city. His wife served us tea.

Koichi admitted he had lied about being colour blind, to avoid military service. Instead, he worked as a street car operator. The morning of the bomb, it was only the protection of a large concrete structure that saved his life. He lost many friends and family that day.

He told a very moving story about lighting the funeral pyre for a colleague who passed in the evening. They had nothing but axle grease to try and soothe his burns. They cried together. We all cried.

The next day, John met with the mayor of Nagasaki. The mayor apologized on behalf of the Japanese government for what had happened to John, and offered him free medical attention, should he ever need it. John replied, thank you very much, but the Canadian government took care of him, and did so very well. Then the dam broke. An emotional John said what was important going forward, was that there never be another Hiroshima or Nagasaki.

When we returned, his wife Margaret told me John slept through the night for the first time she could remember. He had it in him to forgive what was done to him, and in the end, I think that's what really set him free. The next car John bought was a Honda Accord.

And John's story became a bit of a sensation in Japan — it's now taught in Japanese universities — and there is now a memorial acknowledging the POWs of Nagasaki.

John was told, given the radiation exposure, he would be lucky to reach the age of 40. As he was proud to say, he's doubled that, and then some.

He returned to his work on the railway and never missed a day for his entire career. With Margaret by his side, he raised a fine family, full of children, grandchildren, and great grandchildren and, defying the odds, lived to be 94.

Reg Sherren has been introducing Canadians to the people and stories they care about for over three decades. Known for his unique story-telling abilities, Sherren is based in Winnipeg, working exclusively for The National.