The youth accused of striking down Colby Duffenais while driving his ATV drunk in 2015 was sentenced to two years probation on Monday.

Driver, now 18, prohibited from getting a licence for 5 years

The youth accused of striking down Colby Duffenais in Piccaddilly in 2015 while driving his ATV drunk after leaving a Christmas party has been sentenced to two years' probation.

In Stephenville provincial court on Monday, Judge Lynn Cole also ordered the youth, now 18, to 240 hours of community service and told him he could not drive for five years.

For the first six months of his probation, he must also honour a curfew every evening.

Brian Duffenais said the sentence does not strike him as just given the permanent brain damage his son suffered at the hands of a drunk driver.

The driver, who was 16 at the time of the collision, had pleaded guilty to impaired driving causing bodily harm and dangerous operation of a motor vehicle.

Because of his age at the time of the collision, the driver cannot be identified because of the Youth Criminal Justice Act.

Duffenais said friends and family along with 10 members of the local Mothers Against Drunk Driving (MADD) chapter, filled the Stephenville courtroom Monday afternoon.

Struck down after Christmas party

Now 21, Colby Duffenais was struck and thrown 200 feet — or about 60 metres — when he was walking home from a party on the main road in Piccadilly in the early morning hours of Dec. 26, 2015.

Colby Duffenais suffered a traumatic brain injury and will never walk or talk again. He cannot chew, and relies on a feeding tube to stay alive. 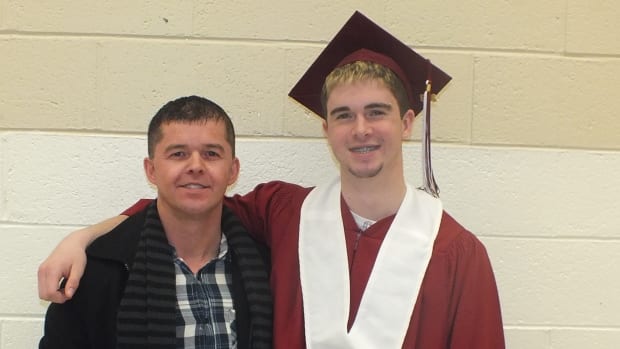 4 years agoVideo
2:04
CBC's Colleen Connors reports on a teenage boy who suffered a traumatic brain injury after being knocked down by an impaired driver more than a year ago 2:04

Brian Duffenais said he cannot help but compare the lives of the two young men involved in the collision.

Duffenais said while his son will never marry or have children, the driver will be able to those things, complete an education and pursue a higher quality of life.

Although Colby Duffenais's condition will never improve, Brian Duffenais plans on bringing him home March where he will have full time support staff to help him eat, bathe and get in and out of his bed and wheelchair.