'I got my son back. To hell with the rest of it,' says Richard Gillett's father

Richard Gillett, on a hunger strike in front of the Department of Fisheries and Oceans building in St. John's, has been taken off site in an ambulance.

Richard Gillett, on a hunger strike in front of the Department of Fisheries and Oceans building in St. John's, has been taken off site in an ambulance.

Dozens of protestors made way for paramedics, who carted Gillett away to a round of applause. 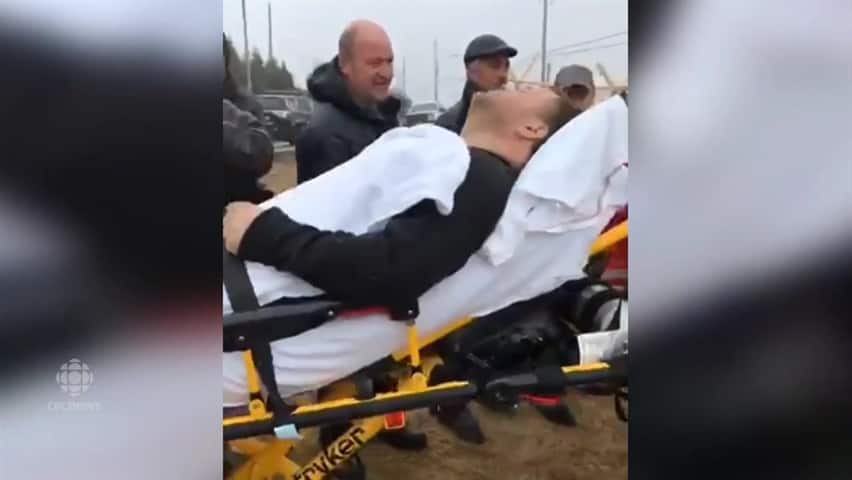 4 years agoVideo
1:26
Scenes on Sunday as hunger striker Richard Gillett is taken by paramedics to an ambulance. 1:26

With mixed emotions of anger and relief, John Gillett watched his son end an 11-day mission.

"I got my son back," he said. "To hell with the rest of it. My family is most important."

Both Gillett men are lifelong fishermen, with the younger serving as vice-president of the Federation of Independent Seafood Harvesters of Newfoundland and Labrador (FISH-NL).

Gillett started his hunger strike to urge a review of DFO scientific studies and stock management. He also pleaded for an inquiry of the relationship between DFO and the rival Fish, Food and Allied Workers Union.

His father had tried and failed to talk him into ending the hunger strike. On Sunday, Richard Gillett's wife, Joyce, made the call for the ambulance.

"I couldn't convince him," John said. "He's his own man, with his own convictions. He's fighting for everybody."

Last week, Gillett demanded a meeting with federal fisheries minister Dominic LeBlanc. The two spoke on the phone, and LeBlanc promised they would speak again.

Gillett also met with MP Scott Simms, just prior to the federal government's announcement of an in-depth assessment of northern cod stocks starting next winter.

Ryan Cleary, FISH-NL president, accused Simms of making the offer to dissuade Gillett from his protest.

Despite expressing dissatisfaction throughout the past 11 days, Cleary now says progress has been made.

"Change has begun," he said. "You've got acknowledgement from DFO that the communication is not where it needs to be, that the management decisions aren't where they need to be.

"It's Richard Gillett that sparked that change."

Ryan Cooke works for CBC out of its bureau in St. John's.