A plan to put a five-storey condominium complex in Quidi Vidi Village attracted much criticism and little praise at a public hearing in St. John's. 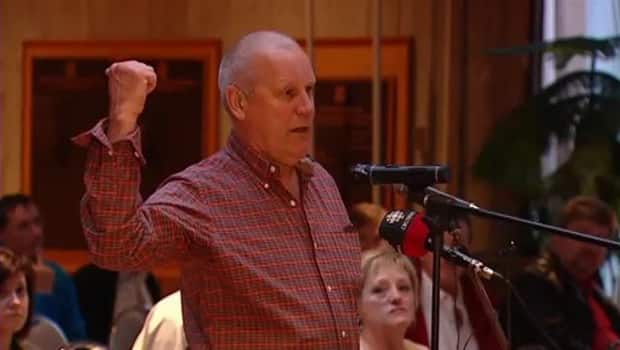 8 years ago
11:04
Excerpts from a public meeting on a five-storey condo development in Quidi Vidi Village 11:04

A plan to put a five-storey condominium complex in Quidi Vidi Village attracted much criticism and little praise at a public hearing in St. John's.

Powderhouse Hill Investments wants to put a 24-unit building on land that developer Bill Clarke owns off Forest Road, just at the entrance to the village, a centuries-old enclave that is known for exceptionally narrow streets and a cosy feel.

"This development adds nothing to Quidi Vidi Village," said Bernadette Arsenault, one of more than a dozen people who spoke at the meeting at St. John's City Hall.

Many of the concerns were about parking and traffic, and what the development may mean for the skyline and heritage look of the neighbourhood.

Michael Mallard said the proposal would be an eyesore.

"I think the look of the building, or any apartment building of that size, down in that area, is going to look stupid," he said.

Architect Dick Cook, who is working with the proponent, told CBC News that the proponents agree with residents who are worried about the impact on traffic loads.

"We're sympathetic to their cause, quite frankly," he told the St. John's Morning Show.

Cook said Powderhouse Hill Investments would like to work with the city to find a solution to divert traffic away from a tight corner in the village, and has land that may be useful.

"The traffic is [already] going to get a lot worse down there," said Cook, referring to the redevelopment of the Pleasantville neighbourhood on the opposite side of Quidi Vidi Lake. Thousands of commuters already drive by Pleasantville — including many coming from the Outer Ring Road — to reach downtown St. John's.

"That is going to increase the traffic tremendously."

Residents also spoke out the density of the project. Cook said it was necessary to build in numbers for economy of scale, and that most condominium complexes built in St. John's lately have been larger.