The town council of Portugal Cove-St. Philip's voted Tuesday night to allow the demolition of the old Anglican church in St. Philip's. 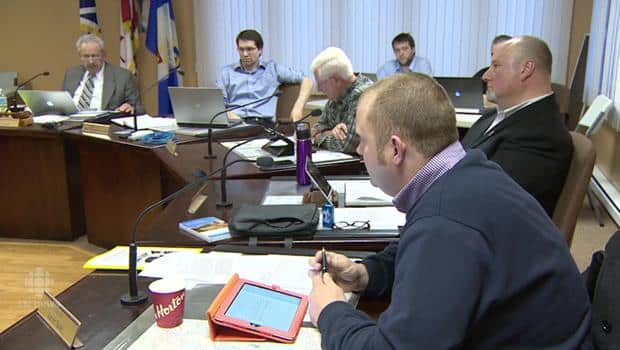 Council votes to tear down church

The town council of Portugal Cove-St. Philip's voted Tuesday night to approve the demolition of the old Anglican church in St. Philip's.

It's the end of a five-year conflict which sharply divided the community between those who want to tear down the 120-year-old building and those who wanted it preserved and restored.

The vote was close on Tuesday, with Mayor Moses Tucker casting the deciding vote in favour of demolition.

It's more than a house of worship for for over 100 years. It's a tomb. There were people beneath that church, and it's a shame.- Mike Musseau

Supporters of restoring the church were devastated, but cheers could be heard from some in the room when the final vote was counted.

Peter Jackson, president of the Newfoundland and Labrador Historic Trust, was one of the quiet ones.

"Newfoundland and Labrador spends millions every year advertising what a wonderful historic place this," he said.

"With beautiful houses and beautiful churches on seaside cliffs, and yet we're knocking them down."

Jackson said the a motion presented at the meeting to build a model of the church just adds insult to injury.

"How ironic that they announced in there that they're going to build a replica in the location of the church," he told CBC's Azzo Rezori

Meanwhile, members of the parish who say they have no more use for the old building were delighted.

Tanya King, who wanted to see the structure torn down, cheered the council's decision.

"We don't want that church," she said.

With beautiful houses and beautiful churches on seaside cliffs, and yet we're knocking them down.- Peter Jackson, NL Historic Trust

"We don't want that building. It's garbage. It's old, there's nothing left to it."

Jennifer Dwyer, who grew up in the community, will be sad to see the building come down.

"I've lived next to that old church my whole life, so to see it gone is truly heartbreaking."

"You always hold out hope, you always want the good guys to win. There was no reason to tear it down."

The battle is lost

Winston Fiander, who fought hard to save the old church, accepted the decision, but said he thinks the town missed out on a great opportunity.

"The battle is lost, there's not much we can do about it now," he said.

"But you know, the town is the loser, once that building is gone — it's gone."

Parish members said on Tuesday that they will make sure to take the old building down respectfully.

Mike Musseau, whose grandmother played organ in the church for more than 50 years, doesn't think there's a respectful way to demolish such an important structure.

​"It's more than a house of worship for for over 100 years. It's a tomb. There were people beneath that church, and it's a shame," he said.

"To vote to tear down this church is a vote to support the person who cut the steeple off in the middle of the night."