A doll that won't stay in the same location and other strange happenings are giving a St. John's family goosebumps. 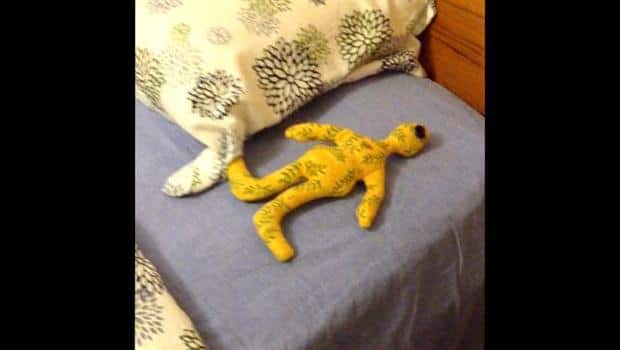 A doll that won't stay in the same location and other strange happenings are giving a St. John's family goosebumps.

Judy Ryan, her partner and her four sons moved into a home in the East Meadows neighbourhood in the east end of St. John's last month. The house — built in the 70s — is an ordinary home in a nice neighbourhood, but Ryan's son Julian noticed strange things happening shortly after the move.

A small yellow doll that Julian, 17, made in Home Ec class ended up on his pillow instead of in the nightstand where it was usually kept.

"I tried to talk to Julian, it's nothing, maybe he's hallucinating. I came downstairs because he was afraid to come down and I came in his room and you have to understand his doors were locked into his basement in-law apartment right?" Ryan said.

"When I came down and I shook the bed covers looking for the doll, underneath the pillow and I couldn't find it, so I looked under the bed. It wasn't under the bed so I started opening the drawers and it's back in the drawers, so I took the doll. As I entered the room I had these shivers come up my spine and it was just really creepy, you get goosebumps like I have right now cause I'm in his room."

She hid the doll again in the library area of the house.

"We went around about our own things throughout the day and as I was going upstairs to put my seven-year-old to bed, the doll was on my pillow, it was in my bedroom on top of my pillow on my side of the bed," she said.

Ryan said that freaked her out. She also thought maybe the kids were playing a prank, but didn't truly believe that.

"So I took the doll again and I hid it again in another spot underneath the sink in sort of like — I have a dressing area," she said.

"I came back and that doll was downstairs in front of my son Adrian's bedroom door. And my son Julian came back and the lamps were tipped over in his bedroom and his skateboard was on top of his TV which is a very large TV."

She said her son Adrian, 14, feels as though he's being followed, and has heard the handle on his closet jiggling. Ryan has also heard a tap-tapping from the main floor at night.

Julian and his mother said they've both been in his bedroom when the radio is off and then they hear static coming from it. They say there's a constant chill in the basement — they blast the heat but yet it never truly gets warm

A friend of Ryan's posted an entry about the house on Facebook. He received a lot of responses — everything from advising the friend to move, contacting a medium or setting up a camera to record any activity. People also shared their stories of odd happenings where they live.

Ryan decided to go to a psychic, Trudy Oakley who reads cards and says she can see spirits and talk to them. Judy recorded the reading. It went on for awhile, but here's a little of it.

"The seven year old is more, she kind of says, 'stop.' You know, but it's the three year old who's moving everything. (She wants attention?) No, she wants your child to know that here's your dolly."

The psychic told Ryan that the spirits were dead about 70 years even though the house hasn't been there that long. She thinks they may have come with Ryan from somewhere else. Oakley said she thinks the father possibly died during WW2 and the mother and two children also died around that time but are separated from him.

Right now the family is planning to stay put. They are slowly adjusting to the weird presence in the home. However, Ryan says they may contact a priest or use a medium to try to clear the home of whatever is there.