Penashue expects to be back in cabinet

Peter Penashue tells supporters in Labrador that he will likely become a federal cabinet minister again if he wins the May 13 byelection. 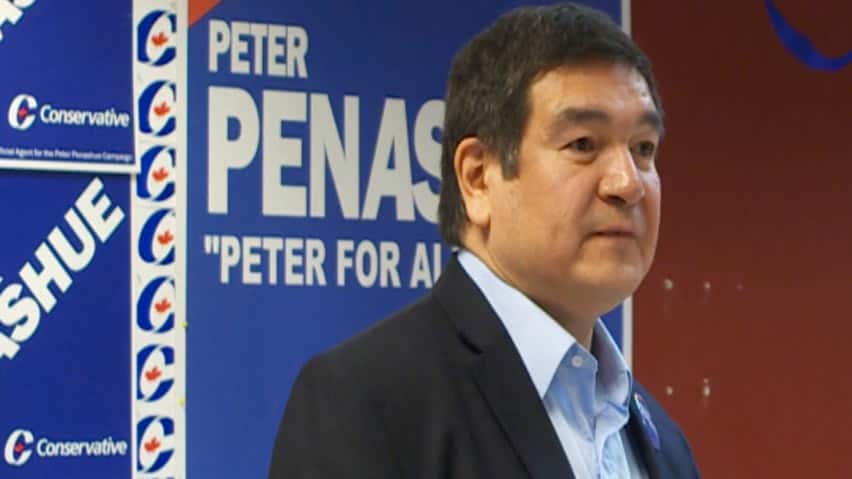 Peter Penashue told a roomful of supporters Tuesday night that he will likely become a federal cabinet minister again if he wins the May 13 byelection, and that probability is a good reason for voters to give him another chance.

Penashue, who resigned his seat amid an Elections Canada investigation into illegal contributions and excessive spending in his 2011 election campaign, boasted that he has accomplished more than his predecessors.

"We have seen more benefits in the past two years than at any time in the past, and I am very proud of that," said Penashue.

"I would like to continue that work for the next two years, because we know that if I am elected, or when I am elected, there is a very high chance that I will be appointed back into the cabinet."

Penashue, who has come in for criticism for sticking extraordinarily tightly to scripted remarks, spoke to supporters without notes, while ridiculing the Liberals who have traditionally held the riding of Labrador, and promising that at least one important announcement is pending.

Penashue also said that a significant announcement about the Canadian Forces Base in Happy Valley-Goose Bay is pending, and that 5 Wing Goose Bay will play an important role in the future of the community.

"The prime minister says, 'I would like to do more for 5 Wing,' and that is why there is a cabinet minister assigned to the file to bring what is known as the operational mandate," said Penashue.

"That's happening, that will be coming, that'll be announced very soon."

Before the 2006 election, Prime Minister Stephen Harper had said a rapid-reaction military unit would be based at 5 Wing, although the election promise has not been fulfiled.

There have been reports in recent years that Harper has been pressuring Defence Minister Peter MacKay to boost the military presence in at the Labrador base.

Meanwhile, Penashue told a room of supporters who helped him celebrate his 49th birthday that he stopped a project in Newfoundland so that more funding could be procured for the Trans-Labrador Highway.

"I attained and pushed for managed to get $85 million for the road, on the Trans-Labrador Highway. I will tell you this. If I was not there, that road, that money would not be spent there. The money would be spent somewhere else," Penashue said.

"I will tell you a secret. I did not sign the approvals in Newfoundland until I had my $85 million for the road in Labrador, and I held their project for six months," Penashue told a cheering crowd.

Although he was Newfoundland and Labrador's federal cabinet representative, Penashue said his riding definitely came first.

"My view is that I was elected by Labrador to represent Labrador, and to do good, to bring the benefits to all Labrador," he said.

"That's why I am there, and I am very, very partisan in Ottawa."

Penashue took aim at the Liberals, who have won all but two of the elections in the riding since 1949. Liberal candidate Yvonne Jones is affiliated with Justin Trudeau, who appears poised to become party leader.

"It is very important that you send me back to Ottawa to represent Ottawa in the cabinet, the federal cabinet. When the time comes that you believe that Justin Trudeau will be the prime minister, then you can send somebody else," Penashue told a laughing crowd.

"It is my view that it is going to take 10 years before that happens, because that's how long it took the Conservatives to come back into power when they were decimated in the previous elections."

The NDP has nominated northern affairs researcher Harry Borlase as its candidate. Tom Mulcair was the first of the national leaders to travel to the riding, stumping for Borlase before Harper set an election date.

Interim Liberal Leader Bob Rae is scheduled to campaign with Jones in the riding on Wednesday.