City says it's a pilot project to help with snow-removal, but will people risk driving impaired over a ticket?

"It appears the City of St. John's is putting snowclearing above citizens' safety," Blackmore told CBC News on Sunday, adding that she thinks if people don't want to pay for parking or realize what options are available, impaired driving will increase, because they'll get in their cars and drive them home rather than leave them there and return in the morning.

That's not the intent, though.

The city says the pilot project will help staff's efforts in removing snow on parts of Water and Duckworth streets, areas littered with pubs, clubs and restaurants.

Coun. Debbie Hanlon has heard others raise Blackmore's concern that if people can't park in and around the entertainment area then they'll get behind the wheel while they're impaired, but she doesn't accept it.

"We believe that responsible people will not drink and drive," Hanlon said.

"Right now Newfoundland and Labrador has the highest number of drunk drivers, so we are really hoping that this might actually help that." 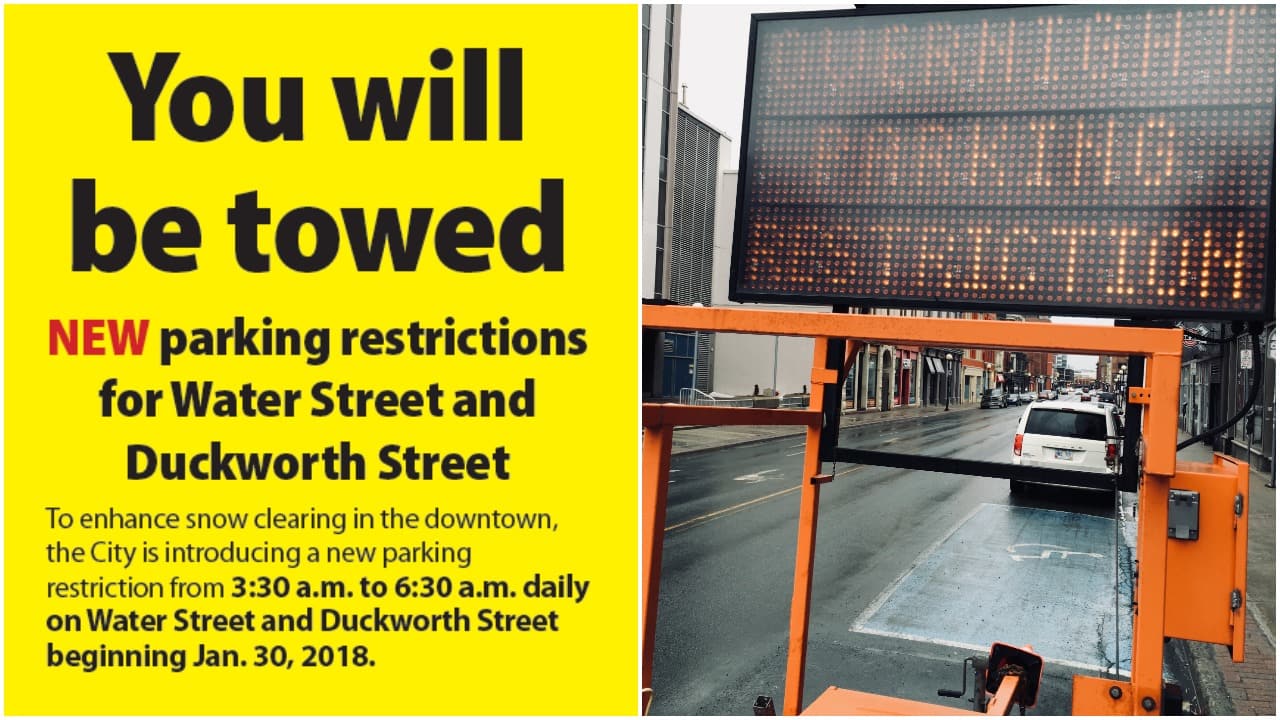 St. John's bans parking in the downtown core as of Tuesday

Here's how the ban works.

On Jan. 30 at 3:30 a.m. any vehicles left parked on Water Street between Prescott Street and Waldegrave Street, and on Duckworth Street, between Cochrane Street and New Gower Street, will be towed at the owner's expense: $250 plus $25 every day that goes past without picking up the offending automobile.

Hanlon says the money goes to the contractor doing the heavy lifting and is not "a cash grab" for the city.

The pilot project ban affects about 320 parking spaces and it will be lifted at 6:30 a.m., giving plow operators three hours to rid the empty streets of snow.

"A lot of people downtown have been waiting for this for some time," said Hanlon.

"Store owners, restaurant owners, and people who live and work downtown, we are getting lots of support from them."

Over the weekend city workers went around the parking ban area placing bright coloured fliers let drivers know of the upcoming ban. The windshield literature outlines where people cannot park and where they can find additional spaces outside of the parking-ban area.

Blackmore said she's concerned about her friends who work in the bar and restaurant industry who will now have to walk a lot farther to their cars in the early morning hours.

"There is no snow here right now, so it doesn't make sense," she said.

"To me, it would make sense after a big snowfall. Put the parking ban in place then for two or three days."