'What in the heck was that?': Fisherman shocked to haul in long-nosed chimaera

A fisherman from Templeman, on the north side of Bonavista Bay, got quite the fright recently when he hauled in a strange creature with his catch.

A fisherman got quite the fright recently when he hauled in a strange creature with his catch.

Garry Goodyear, from the town of Templeman, N.L., on the north side of Bonavista Bay, was fishing for turbot on the Grand Banks last week.

He said the nets were down about 460 fathoms deep — more than 800 metres — and when the crew hauled them up later that afternoon, they all got a shock.

"We're hauling away, and by and by, I seen this coming around the roller. I said, 'Good God! What in the heck was that?'" Goodyear said.

Goodyear said he went to grab the nearly metre-long fish and didn't know what to do with it.

"I thought it was a platypus, because he had that big snout on it," he said.

Goodyear said no one on board could identify the dead creature.

"I brought it into the fish plant, to the wharf where we offloaded, and nobody in there knew — haven't seen it before," he said.

Goodyear took some photos and later posted one on Facebook, to see if anyone could identify the creature.

"I found out that it was a long-nosed chimaera," he said.

"We didn't know it had a spine with venom in it. It was just another fish to us ... and we were handling that with bare hands!"

While he's come across some strange fish throughout his days on the water, Goodyear said this one takes the cake.

"No, I haven't seen nothing like that. To tell you the truth, I don't want to see much more!" 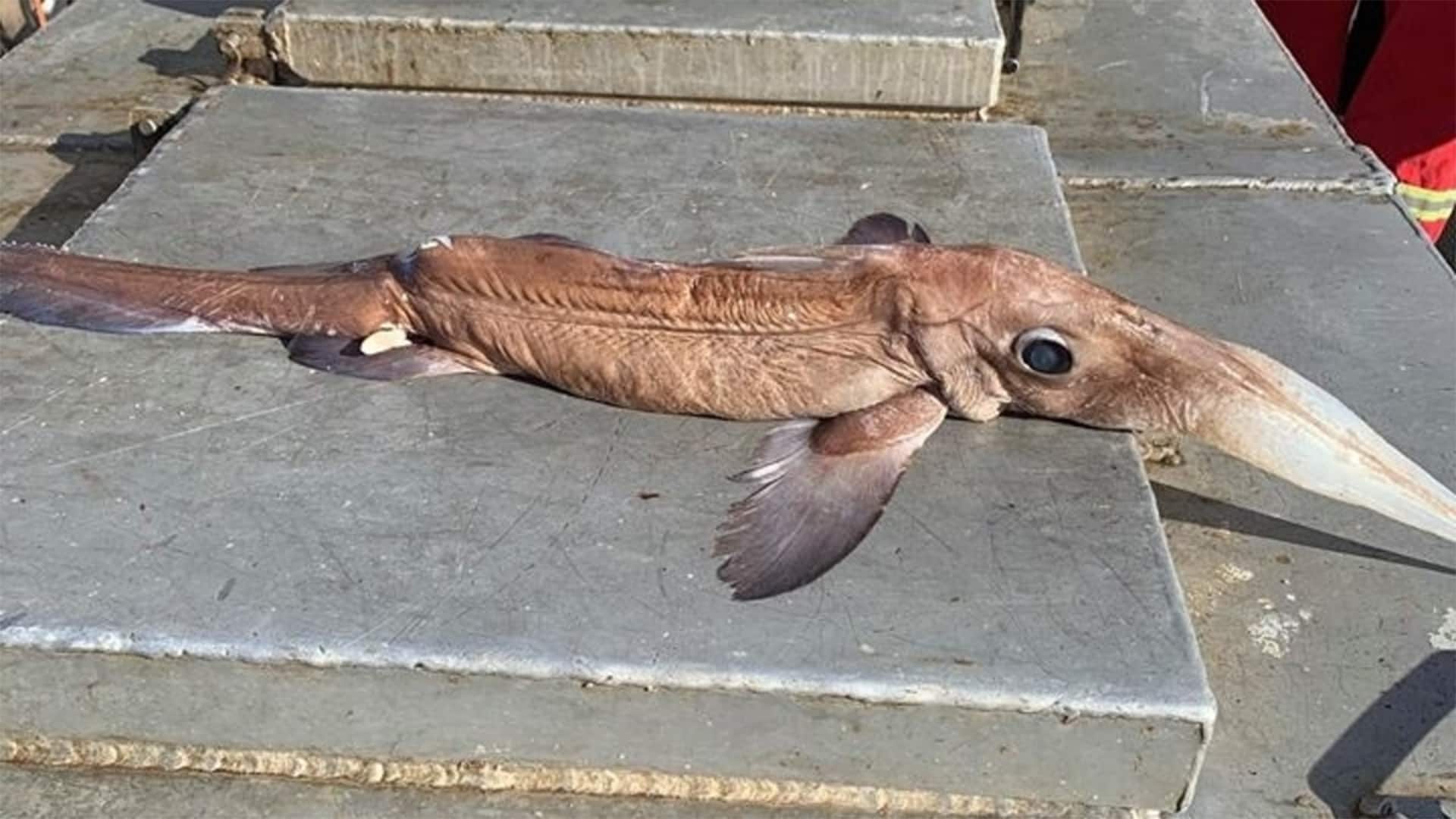 'It's an ugly thing': N.L. fisherman shocked to catch a long-nosed chimaera

1 month ago
5:19
Garry Goodyear was out fishing for turbot on the Grand Banks of Newfoundland when he hauled in a rare long-nosed chimaera. The fisherman says he's never seen anything like the weird creature. 5:19

Carolyn Miri, a marine biologist with the Department of Fisheries and Oceans in Newfoundland and Labrador, said chimaeras are cousins to sharks and skates.

"[They] actually are cartilaginous fish. So all of it is made of cartilage — like the bridge of your nose," she told CBC Radio One's On The Go.

"It doesn't have a skeleton made of bone, like we do."

Miri said the ancient fish is considered a deepwater species, which can be found in the 200- to 1,000-metre range, but it can go down as far as 3,000 metres below the water's surface.

"It is rarely seen by Newfoundlanders and Labradorians," she said.

"Because of their deepwater habitats … we actually don't know very much about their biology, their life history and their behaviour."

Miri said "chimaera" is a Greek word meaning mythical monster. She said it's aptly named, because it does appear to be some sort of cross between a bird and a dinosaur.

"It has a long, pointy snout. Its green eyes are bright neon, which gives you that surreal or monster effect to it," she said.

She also pointed out the pair of pectoral fins on the sides of the fish, just behind the head.

"Those are heavily ribbed fins. So they actually look like feathered wings of a bird," Miri said.

Adult chimaeras can reach up to a metre-and-a-half long, she said, and they have tooth plates in their jaws.

"They crush crabs and shrimp, and any other hard-shelled prey that they can get their jaws around on the ocean floor," Miri said.

She said this fish likely died, as many do, while it was being hauled from the water.

"With the water pressure change, when a harvester is retrieving his or her gear, that often causes lots of deepwater animals to die on the way up to the surface of the ocean," Miri said.

She said it's a good thing it had perished before the fisherman hauled it onto his boat.

"It does have a long, sharp spine … and that could inflict a bad injury if the animal was alive and flailing, thrashing about," she said.

"But even with a dead animal, people need to be super-careful, because of that long spine. It's very sharp."