60 new COVID-19 cases in N.L., all in eastern Newfoundland

Newfoundland and Labrador has 60 new confirmed cases of COVID-19 as the province is now one week into its highest level of public health restrictions.

1 week since coronavirus variant B117 confirmed 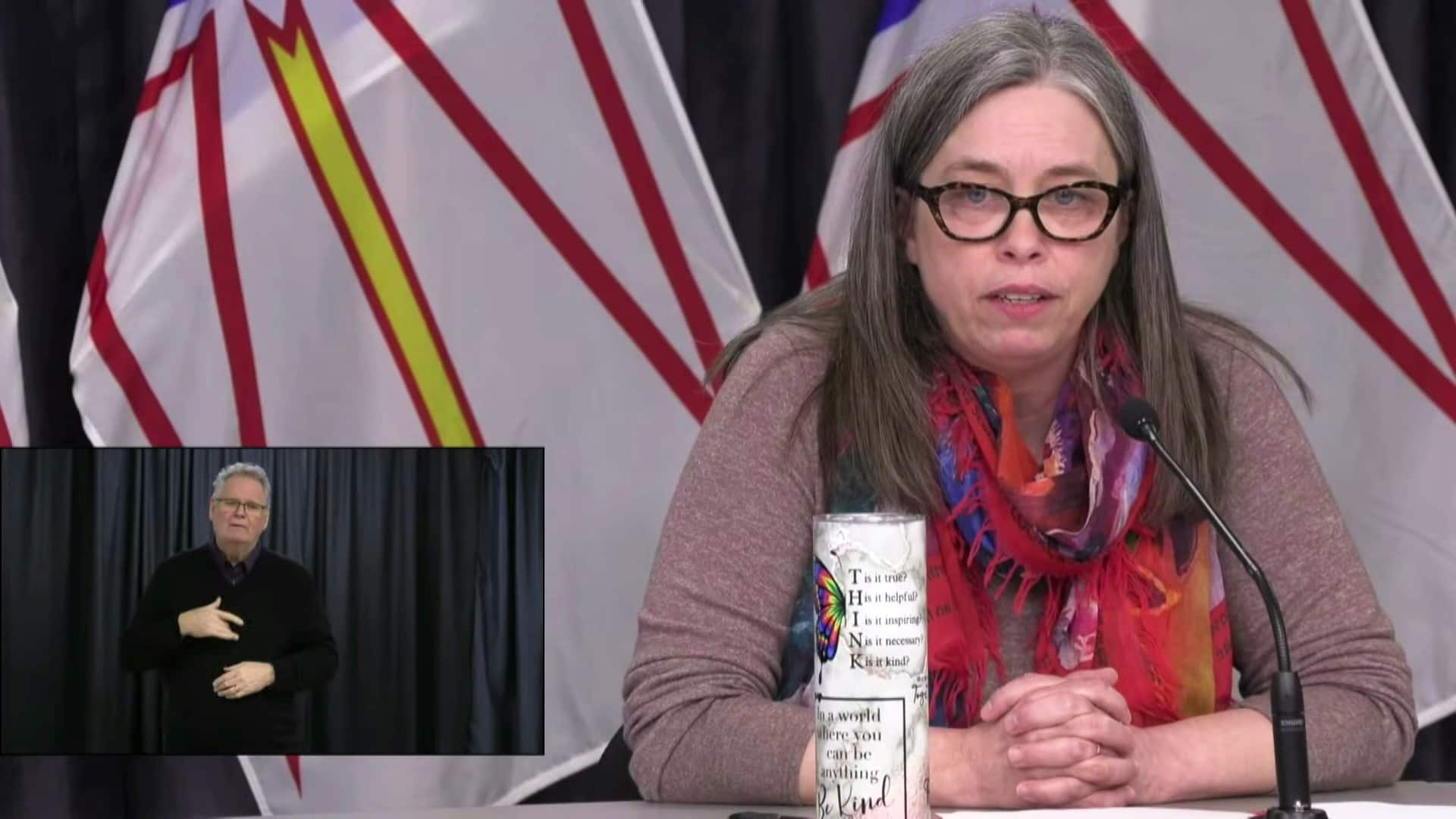 N.L. announces 60 new cases, a week after moving into lockdown

Newfoundland and Labrador has 60 new confirmed cases of COVID-19, as the province completes its first week of its highest level of public health restrictions.

All of Friday's new cases are in the Eastern Health region, and all are under investigation, Chief Medical Officer of Health Dr. Janice Fitzgerald said during Friday's update.

Friday also brought 22 new recoveries in the Eastern Health region and one in the Central Health region, leaving 417 active cases in the province, according to both the Department of Health and CBC data. (Fitzgerald mistakenly reported 471 active cases during the briefing.)

Two people are in hospital.

This coming weekend marks two weeks since the most recent outbreak began, said Fitzgerald, adding there will be hundreds, if not thousands, of people coming out of their two-week isolation period.

"Regardless of whether you tested negative or have recovered from COVID you must still adhere to public health restrictions and apply all your layers of protection."

Health Minister John Haggie said there are only 83 people awaiting testing in the Eastern Health region, while the number is a single digit in the three other health authority jurisdictions.

"Given the fact that there were seven thousand waiting in one regional health authority as of Saturday night, Sunday morning, that is all the more impressive," Haggie said.

Friday's new cases by age show that infections in the current demographic, which had been overwhelmingly under 20, are now more likely to involve people over 40:

Meanwhile, a presumptive positive test in the coastal Labrador community of Makkovik has returned as a negative test, according to Fitzgerald.

The case prompted Labrador-Grenfell Health to respond with a two-day testing blitz in the community, which started Thursday and will end later on Friday.

"My understanding is that confirmatory testing was negative," Fitzgerald said.

When asked if the initial test in this case was a false positive, Fitzgerald said more information will be released when it becomes available.

Now a week into Alert Level 5, Friday marked a halfway point for what health officials called a "circuit break" — an attempt to get a handle on the outbreak of variant B117 and potentially ease restrictions.

When asked if she expects Alert Level 5 to continue after the two-week break, Fitzgerald said a decision hasn't been made, but if there are still increases in new cases the chances of lifting restrictions is low.

As for a regional approach to reopening the province, given that the majority of new cases are in the Eastern part of the province, Fitzgerald said it hasn't been considered yet.

"We're using those pop-up clinics as a snapshot to see what's happening in other regions of the province, and we really want to get that information in first before we make any decisions about lifting restrictions elsewhere," she said.

Haggie said five more trays of vaccine arrived in Newfoundland this week, three of which were allocated to Eastern Health, one for Central Health and the other one for Western Health.

Haggie said Eastern Health has finished its administration of the first dose of the Pfizer-BioNTech vaccine for long-term care and congregate living facilities and is beginning to roll out vaccines for rural long-term care homes.

The health minister said Central Health hopes to finish first doses in all of its long-term care facilities this week, while Western Health is on track to do the same.

"We're currently running around 84 per cent administration of the Pfizer vaccine that we've received."

Staff and inmates of Her Majesty's Penitentiary in St. John's are undergoing testing after a potential exposure to COVID-19 last week. Fitzgerald said HMP and other congregate living facilities will be part of Phase 2 in the province's rollout of vaccines.

Fitzgerald said she was not aware of any positive tests coming out of HMP.

Meanwhile, the Town of Paradise confirmed on Friday that an employee has tested positive for the virus.

In a release Friday morning, the town said the public works department employee has been in self-isolation since Feb. 8 and has had "no direct contact with the public for work purposes."

Contact tracing is underway and anyone considered a close contact will hear from public health workers, according to a release. The town said public health officials have advised that self-isolation and testing of additional employees is unnecessary at this time.