All but one of the new cases are in the Eastern Health region. 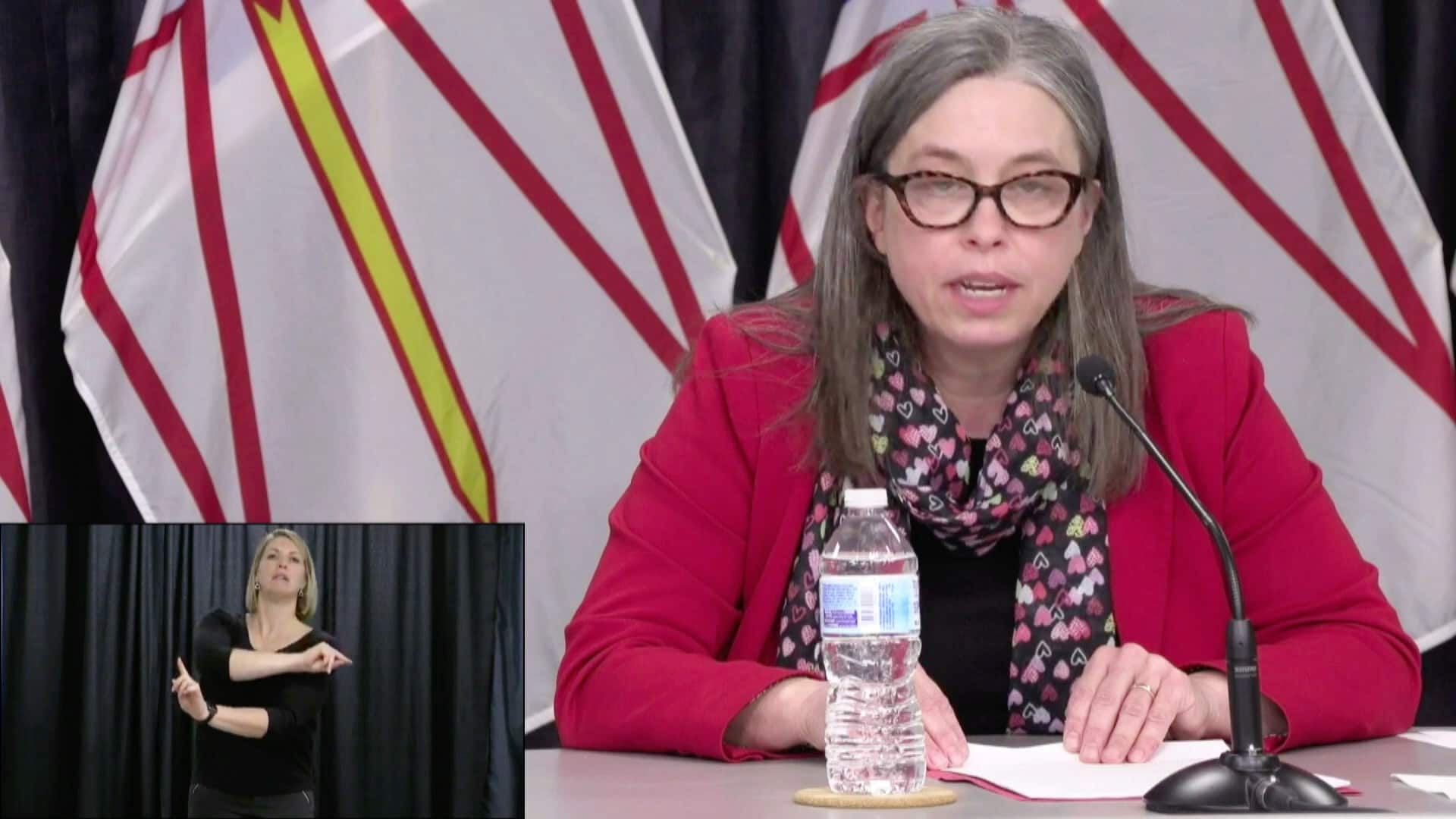 21 days ago
9:28
Dr. Janice Fitzgerald outlines new measures for self-isolation for youths and others who took part in parties, gatherings and team sports 9:28

Newfoundland and Labrador reported 100 new cases of COVID-19 — the province's highest single-day total yet — on Thursday, 99 of them in the Eastern Health region.

The single outlying case is in the Western Health region. There is also one presumptive positive case.

There have been no new recoveries since Wednesday's update. The province has 210 active cases, its highest total to date, surpassing the previous high of 192 on April 6.

Testing efforts have also scaled up this week. Since Wednesday's briefing, 1,667 people have been tested, also a record, and nearly double the previous high of 860, set just the day before.

People need to self-isolate for 14 days (and not 17 days) if they meet any of these criteria:

These high numbers show that "COVID-19 has been circulating in our province for some time," said Fitzgerald.

She added that it means some have been spreading the virus while having only mild symptoms, or even while being asymptomatic.

"We are seeing a snowball effect now," she said.

Fitzgerald initially said she wasn't sure of the number of people self-isolating. But, when pressed, she said, "There is just so many we're not keeping track."

As of Thursday, 31 of the 32 presumptive cases reported a day ago are now confirmed positive and are included in Thursday's total of 100 confirmed new cases. One case remains presumptive and that person is in isolation, according to a Department of Health media release.

In the past five days Newfoundland and Labrador has had 195 cases of COVID-19 — exactly half of the province's total of 390 for all of 2020.

Fitzgerald said she isn't faulting or blaming anyone for being complacent, given the province's low caseload for several months. She also said she's not laying blame on anyone who shrugged off mild symptoms in the belief they weren't related to the coronavirus.

"I'm not trying to say that they did anything wrong; I just think that it's what got us to where we are," she said. "I'm not judging anybody; it's just what has gotten us here and what we need to change so that we can get ourselves out of here."

Fitzgerald said public health officials, through testing, are seeing a lot of cases who are asymptomatic or have mild symptoms.

As a result, public health is widening its testing criteria to include anyone who has only one symptom of COVID-19.

"We have a high volume of requests for COVID tests, and this is a good thing, but it also means more demand on testing resources," said Fitzgerald.

"Eastern Health is working to increase testing capacity and we are prioritizing those who are contacts of cases."

Fitzgerald added if anyone isn't a close contact of a case it will take longer to receive a test, and warned people not to think the spike in cases is contained to Mount Pearl.

"This can get out of hand quickly if we all don't play our part," she said.

Most of the spread is happening among young people who had or have mild symptoms, said Fitzgerald, noting common source events over the weekend of Feb. 5 such as parties and sporting events.

"They didn't really see their symptoms as being potential COVID symptoms," she said.

Fitzgerald said tests have also been sent away to check for the new variants of COVID-19, adding that the department expects results back on Friday.

As for contact tracing capacity, Fitzgerald said public health has been able to draw on health authorities outside Eastern Health to chip in, as well as environmental health officers and the federal government. But, she added, it is still a challenge.

Fitzgerald said Wednesday that the extent of cases is expected to far exceed the reach of the Caul's Funeral Home cluster of last year.

This week, a slew of businesses have been ordered to close, K-12 in-class learning for the metro region has been suspended, and thousands of people are in self-isolation to await test results.

Elsewhere on Thursday, Central Health said it will be implementing visitor restrictions at the Valley Vista Senior Citizens' Home, in Springdale, effective immediately.

In a statement, the health authority said the decision was made after it received confirmation of a positive COVID-19 case in its region. This case is currently under investigation, said Central Health.

"As a precaution to assist with its investigation, Central Health will be testing all employees and residents at this facility," reads the release. "Please be advised that until testing is completed, visitation to the Valley Vista Senior Citizens Home is not permitted. Exceptions may be made for residents in palliative care."

The health authority said of its other facilities and services are operating as usual.

In the Eastern Health region, 155 health-care workers are in isolation.

Anyone who is in isolation receives a regular followup to make sure they are "playing by the rules," and have the support they need to isolate properly, Fitzgerald said.