The consultant who wrote a report calling for a return to offshore night flights says the move may actually reduce the risk to workers. 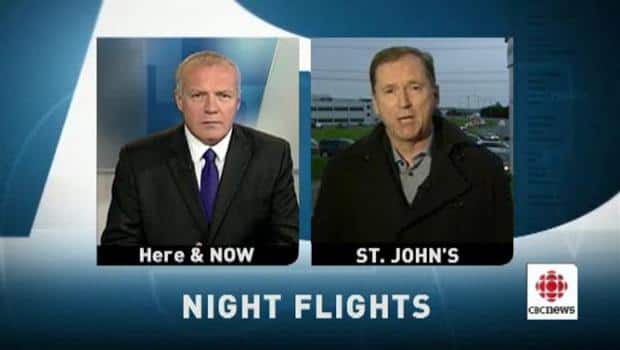 The consultant who wrote a report calling for the lifting of a moratorium on night-time flying to offshore oil installations near St. John's says night flights may actually reduce the risk to workers.

"There's a lot of benefits from a risk perspective to be able to continuously fly at night," Gladstone said in an interview with Here & Now.

"Pilots, if they don't have that option available to them, it's one less option they have when they do their decision-making, should an unusual incident occur when they're out flying out over the ocean," he said.

"And so, that in itself increases risk."

Gladstone wrote his report in response to ongoing work to improve safety conditions in the Newfoundland and Labrador oil industry.

The report found that staff training measures and equipment have significantly improved in the last two years, when night flights were halted during the Wells inquiry on offshore helicopter safety. The inquiry was called after the March 2009 Cougar Helicopters crash that killed 17 people.

From good to great

Gladstone told CBC News that safety measures have gone from good to great.

"It was always safe to begin with, at the beginning of the process, but now after three years a lot has changed [including] how they've enhanced safety to reduce risk to the lowest possible level that they can at this point in time," he said.

The C-NLOPB has not commented on when it expects to make a decision on night flights.

Such a return is vigorously opposed by unionized workers, who have been signing a petition at both the Hibernia and Terra Nova installations.

Lana Payne, the president of the Newfoundland and Labrador Federation of Labour, said the issue is as clear as day.

"The difficulty here is really about whether or not this is a justified risk, and that that is what the C-NLOPB needs to consider," Payne said.

"I would argue, that as it stands at the moment, this is not a justified risk."