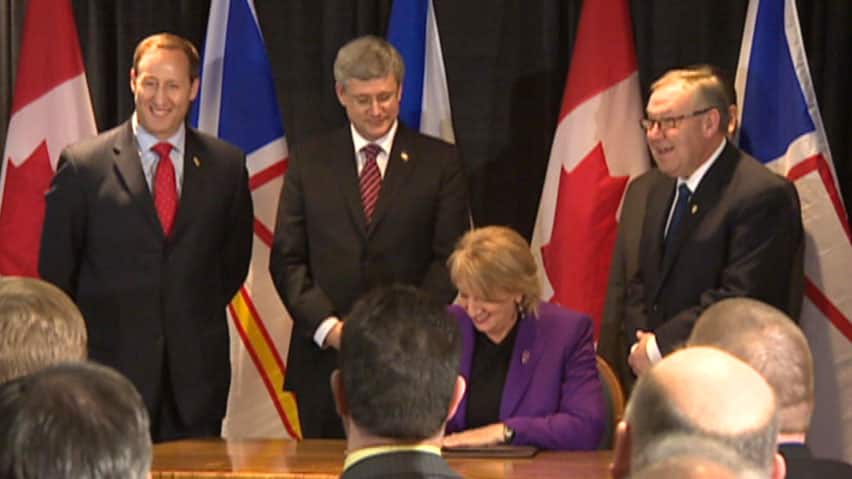 The term sheet sets up a loan guarantee that will cover up to $6.3 billion of the megaproject's cost, and is expected to significantly lower the cost of borrowing. Final legal wording in the contract will now follow.

During Tuesday's question period at the house of assembly, Kennedy said the term sheet will be released, and that government could be in a position to sanction the Muskrat Falls project this month.

While Kennedy can't officially speak for Nova Scotia or Emera, he said he gets the feeling that they are also close to sanctioning the Maritime Link — their portion of the project.

Kennedy said government will be going to markets to secure financing for the project in the fall of 2013.

A group of lawyers that has been raising sharp questions about the Muskrat Falls hydroelectric project wants to see the details of the term sheet that the prime minister signed in Labrador.

But the 2041 Group, a St. John's-based group of lawyers that has released briefs and policy statements criticizing Muskrat Falls, says it wants to see exactly what was in Friday's statement.

"The term sheet for the federal loan guarantee for Muskrat Falls must be released for public scrutiny," the group said in a statement released Sunday night.

"Prime Minister Harper made it clear that the term sheet he signed is not a loan guarantee. No such guarantee yet exists for the Muskrat Falls project."

The group also expressed its concern that a loan guarantee may fall apart if Halifax-based Emera Inc. decides not to build what's called the Maritime Link, or subsea cables that will allow as much as 40 per cent of the 824 megawatts of power to flow from southwestern Newfoundland to Cape Breton. Emera can then sell the power to its domestic clients and export it to other markets.

"Emera has until July 2014 to decide whether it will do so," the group's statement said.

"It is clear that 'No Nova Scotia' means 'No federal loan guarantee.' The Nov. 30 term sheet must be made public immediately," the statement said.

But because of the possible 2014 milestone, the 2041 Group also sees an opening for the review its members feel was denied at the Public Utilities Board. The PUB ruled this winter it did not have enough information to make a decision but the provincial government decided to push ahead with its Muskrat Falls plan.

"Premier Dunderdale has said her government will not sanction the project without a federal loan guarantee," the group said.

"There is now plenty of time for the Dunderdale Government to finally commit to due diligence and a full regulatory review."

The 2041 Group's name refers to the year in which the 65-year Upper Churchill power contract will expire.

Liberal MHA Yvonne Jones said the provincial government is irresponsible and foolish if it sanctions Muskrat Falls based on the agreement signed on Friday.

Jones wants to know when the loan guarantee will kick in, and if it's in place for the length of the project. She is also curious whether the federal government will control development if the province defaults on a loan payment.

She said the provincial government shouldn't give the project the green light without a final agreement in place.

"The details [are] what's really going to tell how it's going to affect Newfoundlanders and Labradorians, and those are the things that have not been shored up to date," she said.