Ottawa defers $844M in Muskrat Falls payments, almost all due by end of year

The federal government again said it will take measures to make Newfoundland and Labrador's Muskrat Falls hydroelectric project financially stable, including waiving $844 million in payments due from Crown corporation Nalcor Energy. But there are few details on how the project will affect the province's ratepayers.

The federal government is again saying it will take steps to make Newfoundland and Labrador's Muskrat Falls hydroelectric project financially stable — including waiving immediate payments due from Crown corporation Nalcor Energy — but there are few exact details on how the project will affect the province's ratepayers.

Prime Minister Justin Trudeau and Newfoundland and Labrador Premier Andrew Furey made the announcement Thursday morning in a live news conference on the prime minister's official Twitter account "to help ensure that the Lower Churchill projects are financially sustainable," according to a news release.

Muskrat Falls was first touted in 2010 as a way for Newfoundland and Labrador to generate its own hydroelectric energy and export excess power to other provinces. Multiple delays, including recent ones due to COVID-19, and ballooning costs have pushed the pricetag to $12.7 billion — double the original estimate — and the project is proving to be a source of angst for ratepayers faced with footing the bill.

Debt and financing payments owed by Nalcor, which operates the Lower Churchill project in Labrador, will be delayed. Since the project isn't yet regularly producing power, Ottawa has temporarily waived the payment obligations to "help reduce immediate financial pressures on Newfoundland and Labrador," according to the release.

He said deferral of those payments relieves the "immediate fiscal pressures" the province was facing, but is just a short-term part of the future of Muskrat Falls.

Furey said negotiations starting Thursday with Ottawa are a step to "right the direction of Muskrat Falls" and address a financially strained project "that has been like an anchor" for people of the province.

Specifics on what taxpayers can expect weren't outlined in Thursday's announcement, but Furey said "rates won't double on my watch."

"I know people are afraid, I've heard the anxiety about the electricity rates at the doors," Furey said. "This is the first step in changing the deal, in changing the framework, so that we have the ability to keep rates where they need to be."

As of September, it is expected the project will be completed by mid-2021.

The next phase will be talks on restructuring the finances of the project to lower hydro rates, but Furey said an agreement will be in place by the time Muskrat Falls is commissioned. He expects it will be drafted and signed in the spring of 2021, and enacted in the fall.

Furey said it's possible the federal government may take an equity stake in the project.

Trudeau said Ottawa is committed to working with the province to ensure the project "remains on stable financial footing," appointing Serge Dupont as senior executive advisor working on negotiations for finance on the Atlantic Loop.

Last year, Dupont was hired as the senior executive advisor for the Trans Mountain Expansion Project (TMX). Previously, he was the deputy minister for the federal Natural Resources Department, as well as Intergovernmental Affairs.

Federal Natural Resources Minister Seamus O'Regan said Dupont is a big name in Ottawa circles, with 35 years of experience in energy and finance.

He said Dupont had been particularly effective in getting TMX built and that it was "a big deal" that he's been appointed as the federal government's lead negotiator.

“Serge provides advice to clients in the public and private sectors on matters related to public policy and governance. Before joining Bennett Jones in 2018, he was a senior executive in the Government of Canada with 35 years of experience in economic and financial policy.”

"He is absolutely perfectly suited to help us find a solution to this problem," O'Regan said Thursday afternoon.

Negotiations will be between Dupont's federal team and the province's Brendan Paddick, who was CEO of Nalcor until he was appointed as Newfoundland and Labrador's lead negotiator on Muskrat Falls rate mitigation in September.

Dupont will also be tasked with looking at the Atlantic Loop, as well as the "electrification of the province" and further uses for the "abundance of electricity" to be generated, O'Regan said.

The Atlantic Loop was mentioned in September's speech from the throne as a plan that will use hydroelectric power from Labrador and Quebec to connect the Maritimes with surplus clean power as it transitions away from coal.

"There's more to be done," Trudeau said, adding that the federal and provincial government "need to keep working to ensure a sustainable financial future for Muskrat Falls."

In February, then-premier Dwight Ball and O'Regan announced the federal and provincial governments had agreed on a plan for Muskrat Falls, aimed at keeping electricity rates affordable.

The agreement was replaced with a traditional cost-of-service agreement expected to cut $74 billion in costs down to $30 billion, which will be passed on to ratepayers.

The details of that agreement were expected to be worked out in the months following the February announcement, but were delayed due to the COVID-19 pandemic. 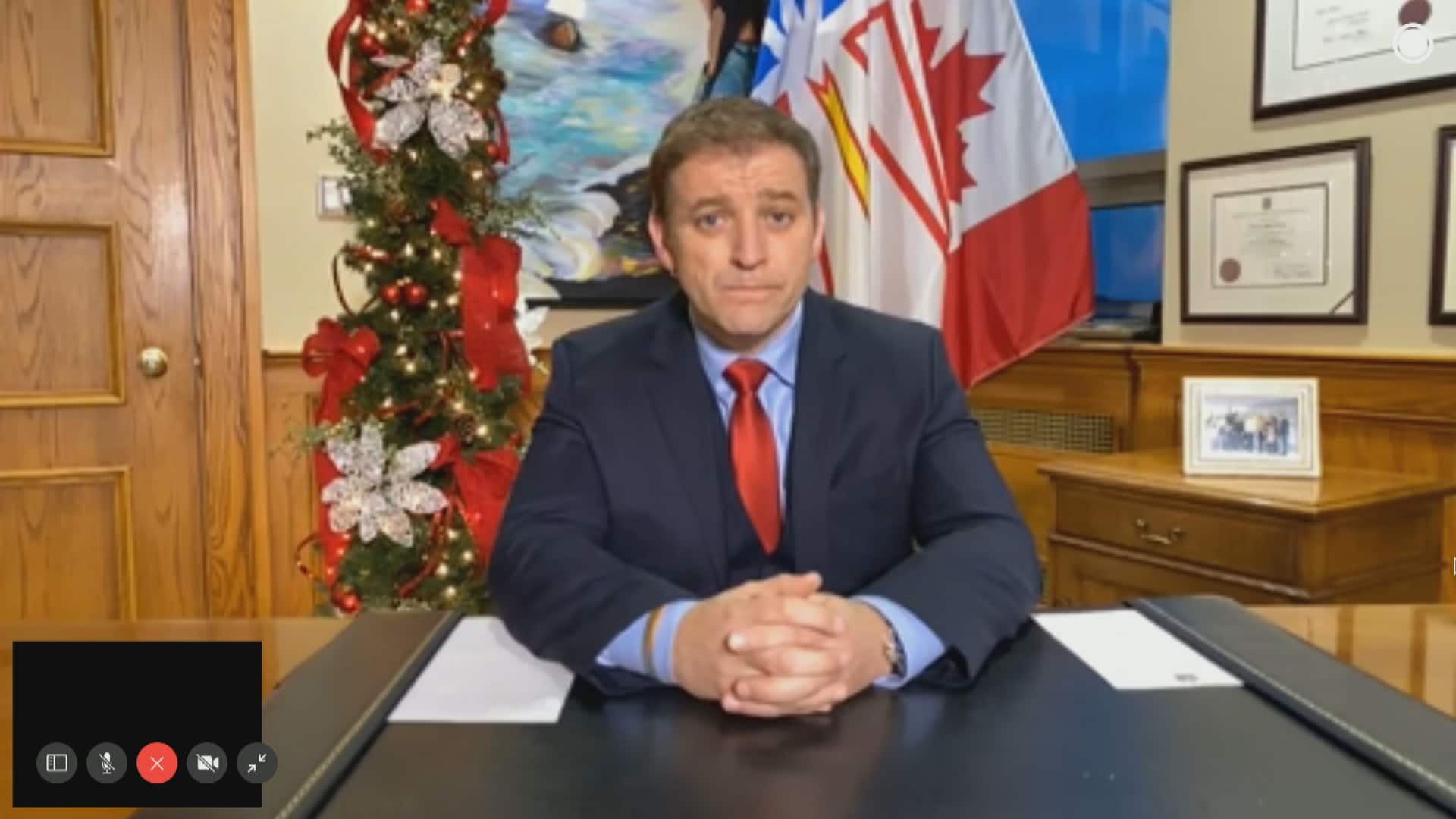 2 months ago
0:51
Premier Andrew Furey says his government is hoping a deal with the Federal government to restructure the finances of the Muskrat Falls hydroelectric project will be executed by fall 2021. 0:51

A long-time critic of the project said Thursday's announcement contained little new information and was short on details of how exactly the federal government will help.

"I really thought it was a nothing-burger," said Ron Penney, chair of the Muskrat Falls Concerned Citizens Coalition.

"I thought we'd get a very big Christmas present, but instead all that we got was setting out the federal negotiating team and the objective of the exercise, but nothing really practical in terms of how the problem is going to be resolved."

Penney said he thinks Ottawa becoming a stakeholder in Muskrat Falls is "the only solution to this problem," referring to the potential doubling of hydro rates due to the cost of the project.

The deferral of hundreds of millions of dollars in payments that were due this month is a "very minor step" in addressing the financial strain of the project, he said.

"I'm not minimizing that, it's important for this fiscal year, but this is a 50-year problem," Penney said.

He said there's no way residents can afford to pay a doubled electricity bill next year and he's worried a major financial burden will fall on generations to come.

"I'm concerned about my children and grandchildren."

The Muskrat Falls project has long been a source of debate and controversy in the province, mired in delays and financial overruns in the billions of dollars.

It was first pitched in 2010 by former Progressive Conservative premier Danny Williams as a $6.2-billion green energy solution that would bring power generated in Labrador to the island of Newfoundland and Nova Scotia through a series of subsea cables. By the time it was sanctioned in 2012, the cost estimate had risen to $7.7 billion.

In September 2020, the project's price tag had grown to $12.7 billion and Nalcor CEO Stan Marshall said that by the time the project is completed in mid-2021, it could tip the scales into the $13-billion range.

Muskrat Falls is a constant topic of political discussion, and with Newfoundland and Labrador heading to the polls in 2021, it will remain in the public discourse for some time.

Delays caused by the COVID-19 pandemic are the latest in a series of hindrances in the Lower Churchill saga. It delayed first power by 10 months, while adding another $400 million to the project's cost.

The COVID-19 pandemic has also been cited as the reason for delays implementing sweeping recommendations made by an extensive inquiry into the Muskrat Falls project.

Stephanie Tobin is a journalist in the CBC Newfoundland and Labrador office in St. John's.

With files from Mark Quinn and Cec Haire