Heavy rainfall and rapid snow melt from warm temperatures have done millions of dollars in damage to structures and roads in Corner Brook and around Newfoundland's west coast.

Corner Brook Mayor Jim Parsons said Saturday night roads have been washed out, and drainage systems and walking trails have been affected. Private property has also been damaged, including flooded basements, and potholes being ripped into roads.

The public works depot has been seriously damaged, he said, perhaps beyond repair.

"I don't know if we're going to be able to go back in that building in a usable fashion," he said.

Crews are working to prevent further damage to city infrastructure, said the mayor, who declared a state of emergency around 4 p.m.

'All hands on deck'

"We've got all hands on deck for this, needless to say," he said. "Fire department, public works, the RNC, everyone's on alert. We're not going home and going to bed quite yet."

Parsons asked people to stay out of parks overnight.

"We don't know where water's going, we don't know how stable it is. So please don't venture out if you don't have to."

Premier Dwight Ball said Saturday night that full assessments of the damage were still being done, but there are people stranded without access to health-care services, phone services and electricity.

"Today we've seen the force of Mother Nature and the impact that water is having on our communities," he said.

"We have people that have houses moved off their foundation, we've had everything from landslides, to flooding, to compromising of culverts to a Trans-Canada Highway that's been ripped apart at the Little Rapids area."

The damage is widespread along the west coast, said the premier.

"Fortunately, for the most part, we're able to get emergency vehicles through, but it is a lot of devastation on the west coast of Newfoundland right now," he said.

"For those who require health-care services, we have helicopters that are in place for emergencies, and we're able to get emergency vehicles through, like ambulances, in the areas that are even underwater."

Crews are in all the areas that have been affected, he said.

Shortly before 6 p.m. Saturday the Town of Humber Arm South declared a state of emergency due to its issues with infrastructure damage from the heavy rainfall and snow melt.

Saturday morning, RCMP on the west coast advised motorists that rain had washed out a section of the Trans-Canada Highway, stopping traffic in both directions in the Strawberry Hill area just past Little Rapids.

By 4 p.m. Saturday the road had collapsed, as this video by Sandy Dunphy shows the asphalt give way. 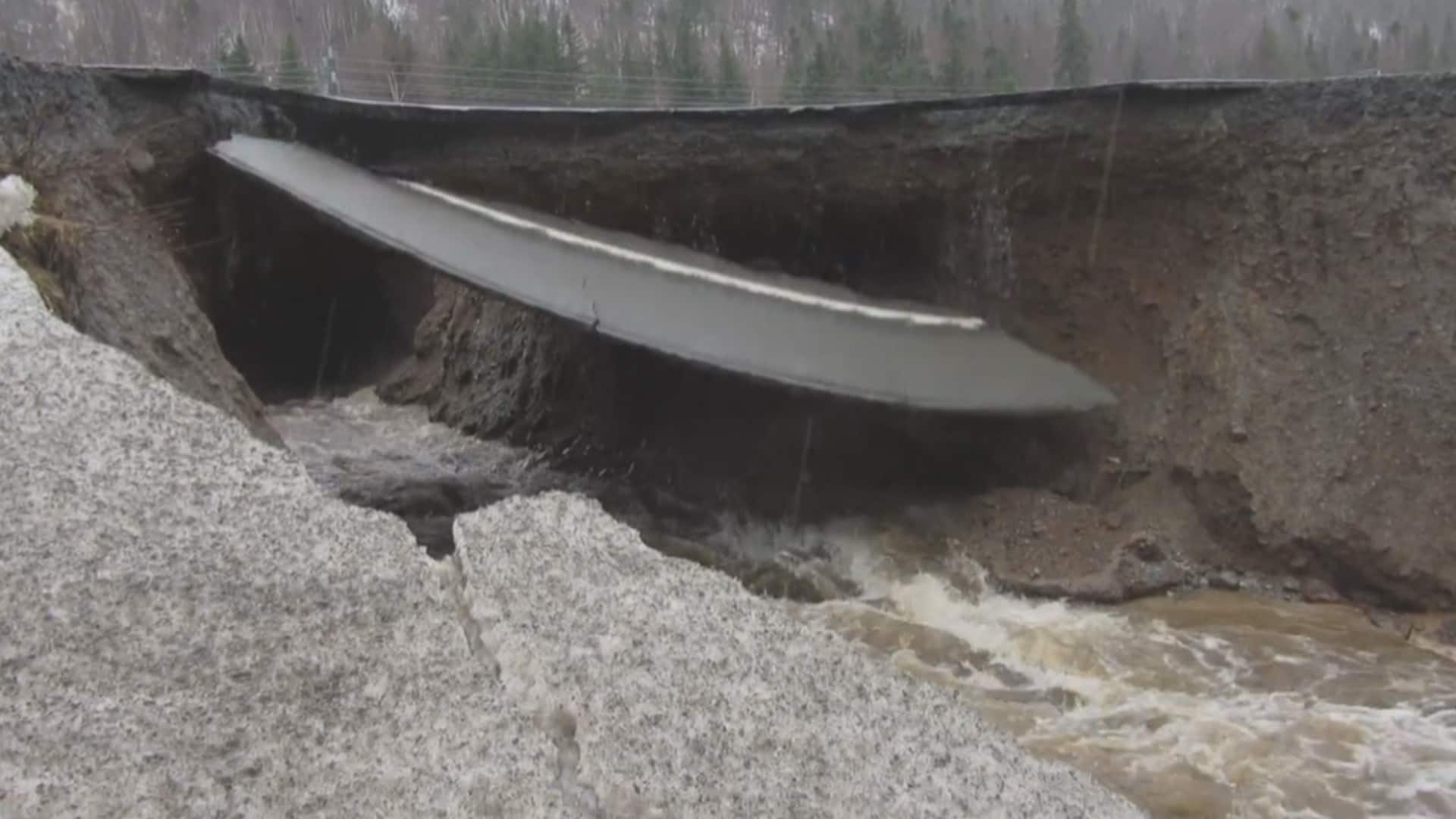 Vanessa Burry of Little Rapids told CBC News there was no access to Corner Brook from Deer Lake east for most of the day.

"The Department for Transportation is there [on scene] … there's some police cars and stuff there, too. They're just directing traffic," she said.

As of 5:30 p.m., the department had one bypass lane open with staff escorting traffic through. Drivers are asked to only travel if necessary.

Police say the damage is being assessed and necessary repairs will be made, but drivers can expect delays with emergency crews and the provincial Department of Transportation and Works on the scene throughout Saturday.

Colin Butt posted this video of flooding on Route 430 north of Deer Lake on Twitter just before 1 p.m. Saturday.

Woody Point Mayor Greg Osmond said no one can get into or out of the community as the road is completely blocked, but the Department of Transportation and Works is on site "doing a good job."

Between flooded basements and a temporary power outage when a power line was knocked down, Osmond said "it's pretty hectic."

He said the community "had an extreme amount of snow this year," so all that melting plus nonstop rain is wreaking havoc.

"We've got some guardrails that are actually probably out in the bay right now," said Osmond.

Water levels are so high in Benoit's Cove one garage is almost completely submerged.

Marble Mountain is closed, as crews dealing with mud and flooding work to clear ditches and culverts so debris can move through.

Rainfall, wind warnings for much of island

As of 11 a.m. Saturday, Environment Canada had warnings in effect for almost all of Newfoundland — only Buchans and the interior was exempt.

Strong winds that may cause damage to buildings are affecting a number of areas, including St. John's and other eastern parts of the island.

Rainfall warnings are in effect for much of the western and southern coasts. Environment Canada is noting the "rain combined with unseasonably mild temperatures will cause substantial snowmelt and runoff."

The frozen ground is not able to absorb the rainfall.

In Labrador, a snowfall warning of 15 to 25 centimetres is in effect for Norman Bay to Lodge Bay.