The Canadian Hard of Hearing Association is aiming to create more awareness about noise induced hearing loss. It's installed a new vending machine at Mile One Centre.

Have you bought tickets for an upcoming concert at Mile One Centre? The local chapter of the Canadian Hard of Hearing Association hopes you'll spend one more dollar on what might be a more important long-term investment — earplugs. 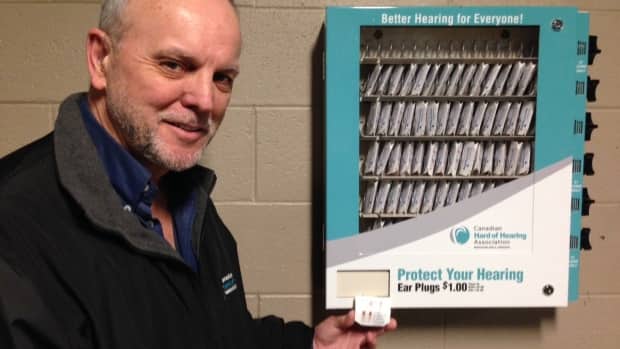 Mills told On the Go, a person can safely listen to sounds at 85 decibels for up to eight hours. Once the decibel level rises, the safe listening time drops dramatically. Mills says many music concerts and other loud stadium events can easily register at 120 decibels. "So your safe hearing time could be reduced to 15 minutes," said Mills.

If you don't use earplugs, Mills said hearing damage can be obvious as soon as concert goers leave the venue.

"Their hearing can seem a little bit muted and there's often a little bit of ringing in your ears … that's your hearing mechanism's way of warning you that you have suffered a temporary hearing loss. Most people, that might go away over an number of hours but for some people that might never go away," explains Mills.

Newfoundlanders and Labradorians engage in a lot of loud activities all year long, according to Mills. Everything from ATV riding to use of electric tools. Mills points to the use of in-ear earbuds with listening devices as one of the leading causes of noise induced hearing loss. He thinks young people are most at risk.

"Hearing health experts are sending out warnings to anyone who'll listen that we are facing a looming epidemic of hearing loss of people in their 20s or 30s that's going to manifest itself in the next few years because of this exposure."

Mills says hearing loss is the fastest growing disability around the country with one in five people now suffering a hearing impairment.

The CHHA-NL earplug vending machine at Mile One is a pilot project. "We'll be monitoring it and seeing what the reaction to it is...how much use it gets and if it's well received, we plan to roll it out to other stadiums and other public venues around the province over the next year or so," said Mills.

There are plans for a multi-media awareness campaign over the next few years as well but Mills sees the vending machine as a good start.

"Noise is something that people really, really need to start paying attention to."