The mayor of Wabush, which underwent a weekend evacuation as forest fires raged nearby, says such orders need to be mandatory. 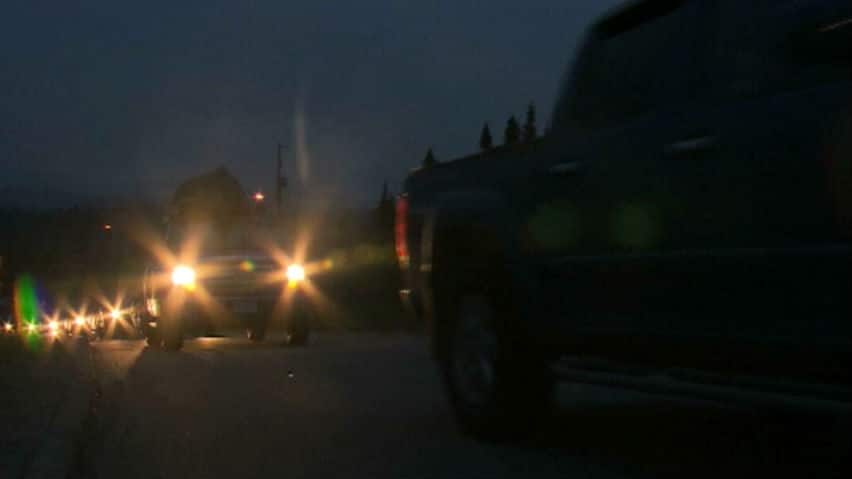 The mayor of the Labrador town that underwent a two-day evacuation over the weekend as forest fires raged nearby says such orders need to be mandatory and enforceable.

Newfoundland and Labrador's Department of Natural Resources issued what it described as a mandatory evacuation order on Friday night, but Barron said that was in name only.

"There's no such thing as a mandatory evacuation," he told CBC News.

"If they chose to stay, it's up to them. They're taking a risk actually of themselves and a risk of first responders having to waste valuable time and effort to remove them from the area when they could be doing other things, [such as] saving homes and properties."

More than 1,700 people left Wabush late Friday night, with most finding accommodations with friends and family in neighbouring Labrador City.

Wabush remains under the threat of another evacuation, as crews tried to extinguish hundreds and possibly thousands of hot spots in deep forest surrounding the mining town.

Some residents, though, had no apologies about refusing to leave their homes.

Jerry Hunt, who lives on the street in Wabush closest to the fire that came within four kilometres of the town, said he has seen two major fires during his 48 years in the town, and he was not about to leave last weekend.

"I'm not going to put my life in danger for nothing," Hunt told CBC News.

Resident Brad Murley, who also stayed behind, said he was prepared to leave if the fire moved closer.

"There was no real need to look out to us. Everyone on our street here was self sufficient and ready to go when we see the problem," Murley said.

But Barron said there would have been less anxiety over the weekend if those who had stayed behind had notified officials. Most of those who did leave registered with a Canadian Red Cross station set up in Labrador City.

"If we know that you're staying, that's fine," Barron said. "But what transpired over the last few days is that we had more people in town than we thought we had."