Businessman Dean MacDonald has announced he will not seek the leadership of the provincial Liberal party. 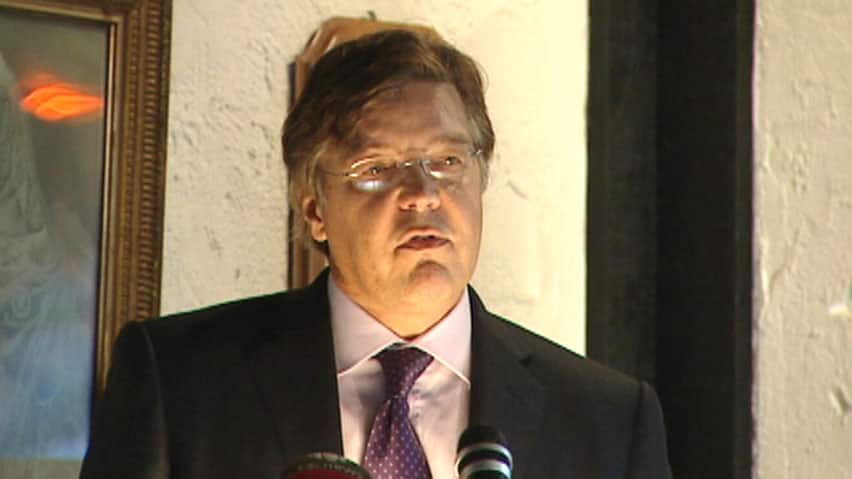 Businessman Dean MacDonald has announced he will not seek the leadership of the provincial Liberal party.

There has long been speculation that MacDonald would be the party's next leader, but he announced Wednesday afternoon that he will fight for the province as a private citizen -- not as a politician.

"Timing is everything," he said. "This time is not mine."

MacDonald addressed about 60 members of the Conception Bay South and Area Chamber of Commerce at the Woodstock Colonial Inn.

He opened his speech stressing the importance of having a longterm plan in place for Newfoundland and Labrador, which would make life easier for future generations.

MacDonald said business interests that couldn't be resolved in time to make a leadership run, as well as family priorities, were key factors in his decision making.

He said he's not endorsing anyone for leader, and will continue to work for the Liberal party.

MacDonald's perceived frontrunner status did not guarantee him a clean race to the top.

His former close ties to Danny Williams are a sore spot for many in the party. MacDonald was essentially absent from Liberal politics during Williams's time as premier.

MacDonald is also a vocal supporter of the Muskrat Falls hydroelectric project, which many Liberals oppose.

Multiple Liberal sources also said that there was a tense encounter recently between MacDonald and the Liberal party executive at their convention in Gander at the beginning of November.

They said there was a disagreement over how to roll out the findings of the Liberal renewal process, which MacDonald co-chaired.

"I really don't pay a lot of attention to what is happening on the other side of the aisle. That's their challenge that they are going to have to work through," she said.

"All I can say is that we will be prepared to deal with their new leader, whether it's Mr. [Dwight] Ball or someone new when the time comes."

The next provincial election is slated for 2015.