Two administrators with the Newfoundland and Labrador Libraries Association say closing half the public libraries in the province will have negative consequences, despite reassurances from members of government to the contrary. 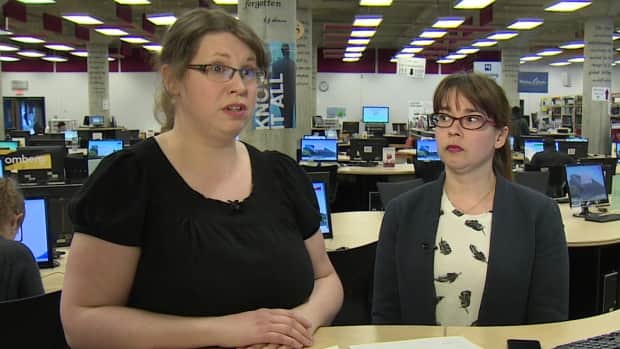 Two officials with the Newfoundland and Labrador Libraries Association say closing half the public libraries in the province will have negative consequences, despite government reassurances to the contrary.

In an interview Thursday with the St. John's Morning Show, NLLA President Amanda Tiller-Hackett and Vice-President Krista Godfrey said while they expected some cuts to the library network, they didn't think it would be as bad as it was.

"I [wasn't] surprised that there were closures, but I was surprised at how many there were," said Tiller-Hackett.

"Fifty-four libraries will be cut, 64 positions, so we're thinking they must be in small areas, rural areas — libraries with one or two staff members."

The locations of the closures have not yet been revealed.

On Wednesday, the province's library board reassured the public that despite the mass closures, 85 per cent of users would still be within a 30-minute drive of a public library.

According to association, even a 30-minute commute is not reasonable for many people who depend on public libraries.

"Driving a half an hour is quite a [long] way. We've got new gas taxes on top of that, we've got auto insurance," said Godfrey.

"Whether or not a mother with a five-year-old is going to drive 30 minutes to take their daughter to the children's story time, I'm not sure if that's actually going to happen. We're definitely going to see a reduction in programs. What happens to the other 15 per cent?"

Libraries needed more than ever

Tiller-Hackett said that in light of other aspects of the provincial budget, people need services at their local library more than when the economic outlook was brighter.

"In the current financial crunch, people are going to less able to afford internet from home and devices they need to read e-books," she said.

"I think libraries are going to be more essential now than ever."