Labrador protesters detained in Ottawa while demonstrating against Muskrat Falls

Video shows three people who were previously arrested at the Muskrat Falls site being arrested on Parliament Hill.

Marjorie Flowers, Jim Learning and Eldred Davis among those escorted away by police

Several people demonstrating against the Muskrat Falls project in Labrador were detained on Parliament Hill on Monday afternoon.

Protesters were carrying signs of children, saying they wanted to place them on the desks of Members of Parliament to show the faces of the people at risk of methylmercury poisoning when the Muskrat Falls reservoir is flooded.

At least three of the demonstrators taken into custody were elder members of the group that call themselves the Labrador Land Protectors, who had been arrested before while protesting at the site of the hydroelectric project.

Jim Learning, Marjorie Flowers and Eldred Davis were sent more than 1,500 kilometres from their homes in Labrador to Her Majesty's Penitentiary in St. John's last July.

Police say the protesters were given trespassing notices and released. They are banned from Parliament Hill for 90 days.

No charges have been laid as of late Monday afternoon.

On Monday, Flowers stood opposite a line of police officers, flanked by other protestors holding signs and photos.

"This is the only place left," she said to the officers. "We've tried everything else. I'm at my wits end. I don't know what else to do."

With that, she took one step towards the police.

"You're under arrest for obstruction," the officer said before escorting her to a police car and placing her in handcuffs. 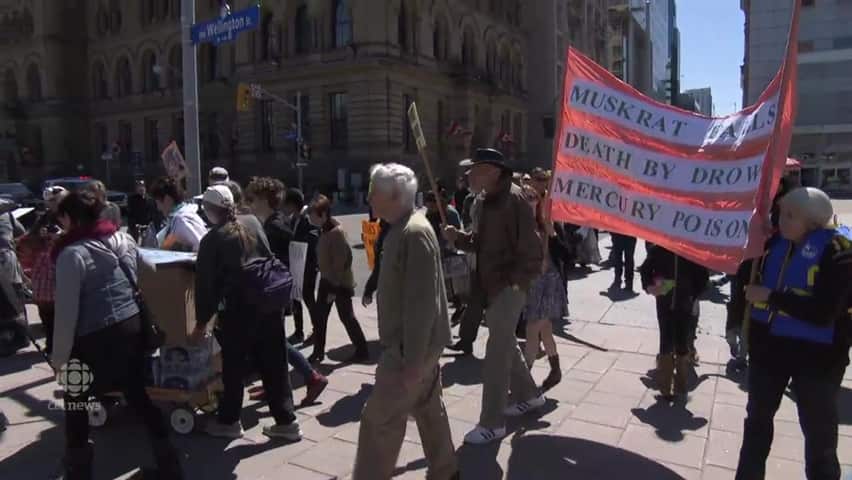 In the following minutes, several protesters appeared to be escorted into police custody — with only Flowers seen in handcuffs.

The detentions came minutes after an exchange with Labrador MP Yvonne Jones in front of the Parliament Building.

Protestor and freelance journalist Ossie Michelin told Jones he believes she really cared about the people of Labrador, but said he was losing hope she would help them in their fight to have the soil removed.

"I can't believe in this forever," he said. "I can't have promises made to me to save the lives of my friends and my culture and all of a sudden have it taken away. And then what are we supposed to do? We need your help."

Jones replied by saying she will engage with the province's Indigenous groups and supporting them in whatever happens next.

She said the recommendations from the committee have to be combed over by the provincial government in partnership with the Indigenous groups and keeping the protest groups in mind.

"I want to give you assurance we have listened to you today," Jones told the demonstrators.

Differences of opinion on reservoir action

The protesters were trying to rally support for their concerns about methylmercury poisoning once the reservoir is flooded.

Studies that included Harvard University research have warned the methylmercury levels could be harmful to people who catch and eat fish in the area.

Weeks of passionate protests in 2016 — including hunger strikers who took to Parliament Hill — led to the establishment of an independent advisory committee to look at the threat of methylmercury poisoning.

The committee reported back last month, recommending the topsoil and vegetation be removed at a cost of $742 million.

Ultimately, it will be the provincial government's decision on what to do next.

While the Inuit want to see the soil removed, the Innu Nation has called it a "risky experiment."

With files from CBC Ottawa and Sheena Goodyear