A 14-year-old from Musgravetown has set a record at the Gander Flight Training School, becoming the youngest student there to ever fly solo. 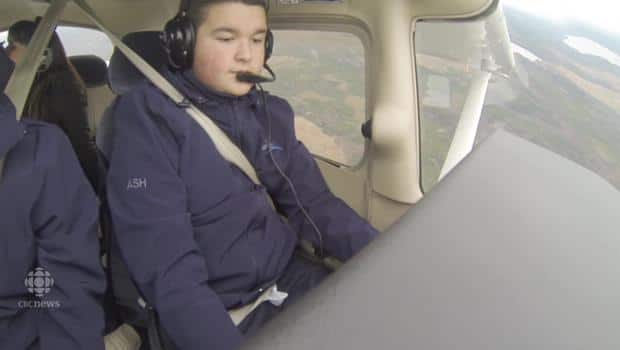 Up in the air with Kyle Ash - 14-year-old pilot

A teenager from Musgravetown is the youngest pilot to ever fly solo at the Gander Flight Training School at just 14 years old.

Kyle Ash has logged about 34 hours in the air — and the sky seems to be the limit for Ash, who wants to be a commercial pilot when he's older.

"I started picking up the passion when I was three, and every time we used to go on a plane I used to make sure I was the last one off the plane so I could talk to the pilots. My first flight, I loved it. I couldn't believe people actually get paid for flying — it's so fun," he said.

"It's the same thing as driving a car or driving quads, peddle bikes, same thing, there's really no difference," said Ash, who is still too young to drive a car.

Even thought Ash has loved flying since he was a child, he said his first time flying solo was a bit different.

"It was quite fun but it was just different, not having no one there to talk to. I'm used to go up for two hours, just going around, with someone to talk to. This time — no one," he said.

In some countries, like the U.S. and U.K., a person has to be at least 16 years old before taking to the air on their own.

But in Canada, you can fly when you're younger as long as you've logged the hours of practice and study.

"The main thing is, he's dedicated. You give him homework, he does it — that's the main thing," said Bahuguna.

"And he's young, so sometimes he forgets some stuff, but at the end of the day he's pretty good."

Ash said there are a few things he needs to know that may be a little stomach-turning for some people.

"There's one thing called a spin, that you go up and stall the airplane. It's shut off, and you start spinning down towards the ground and you gotta get out of that, 'cause that's an emergency procedure, so you gotta learn how to do it in case something actually goes wrong."

For now, Ash has a student permit, meaning he can only fly at the school. But when he turns 16, he can apply for a recreational pilot licence.