A short video showing a St. John's man trying - and generally failing - to get out of a snowbound house while talking with his frustrated mother has become an international sensation. 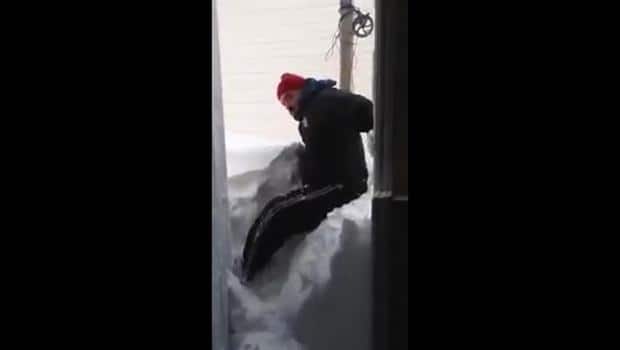 7 years ago
1:13
Submitted by Kayla Scott. Scott took this video of Maureen and Barry Horlick yesterday in Shea Heights 1:13

A short video showing a St. John's man trying – and generally failing – to get out of a snowbound house while talking with his frustrated mother has turned into an international sensation.

A two-day spring storm this week dumped 40 centimetres of snow to the greater St. John's area, bringing the city to a standstill. Residents have been shovelling out since.

The video was taken Tuesday of Barry Horlick trying to escape from his mother's home in the city's Shea Heights neighbourhood. He became stuck in a snowbank, and the back-and-forth dialogue — featuring St. John's accents and vernacular expressions — between Barry and his mother Maureen has set the video soaring.

By early Thursday, more than 100,000 people had viewed the one-minute video on YouTube alone.

"Mudder, I'm stuck," Barry yelled out, as he tried to get through a snowbank right on the family's doorstep. When Maureen told him to hold on to the post, that attempt failed, prompting her to cry, "Oh jumping Jesus tonight!" The phrase is a common expression in parts of Newfoundland.

The back-and-forth banter is reminiscent of a Codco or 22 Minutes sketch, but is very much real — although family members admit they knew they had captured comedy gold, because they couldn't stop laughing at it themselves.

Laurie Horlick, Barry's sister, said it was originally meant to be shared only for the enjoyment of family and friends.

"[I] just shared for a bit of fun knowing it was going to be an adventure trying to get out," she said.

"But we're totally blown away at how far it's gone."

The video has attracted media attention in the U.S. and the U.K.  Horlick said that by Thursday morning, the video had 15,000 shares on The Ellen DeGeneres Show's page and 12,000 through Facebook. Laurie Horlick said even friends in Saudi Arabia have already seen the wintry encounter of her brother and mother.

'Our phones have been dinging like mad' - Maureen Horlick

Maureen Horlick said she never expected the video to have such a response.

"We never expected this in a million years," she told the St. John's Morning Show on Thursday.

"Well, actually the whole thing was to put the chair by the door and [for] him to just jump out over, but apparently it didn't happen – and it ended up being quite funny," she said.

"Our phones have been dinging like mad. It made someone laugh."

Laurie Horlick said family members often kid around with each another.

"We're the type of family, we're always joking and carrying on, and it was just something we do sometimes for our own personal use," she said.

"I myself, I'm always at it, but it just happened to be one of those things that wasn't planned. We're having such a crappy winter, and you know, [it's nice] to bring the light out of it all," she said.