The premier announced the move after the legislative session was adjourned Thursday to deal with complaints of harassment by Joyce.

Ball says what’s in the review will determine whether Joyce is allowed back into caucus <a href="https://twitter.com/hashtag/nlpoli?src=hash&amp;ref_src=twsrc%5Etfw">#nlpoli</a>

"As new information became available today, we've reviewed the tapes now [of Joyce being interviewed by reporters], I've met with Mr. Joyce, I've directed and he's volunteered now to remove himself from caucus, so that decision has been made."

"I launched a formal complaint at 8:30 yesterday morning. That's all I'm willing to say right now," Gambin-Walsh told reporters at the House of Assembly on Thursday. She declined to get into specifics about what prompted her complaint. 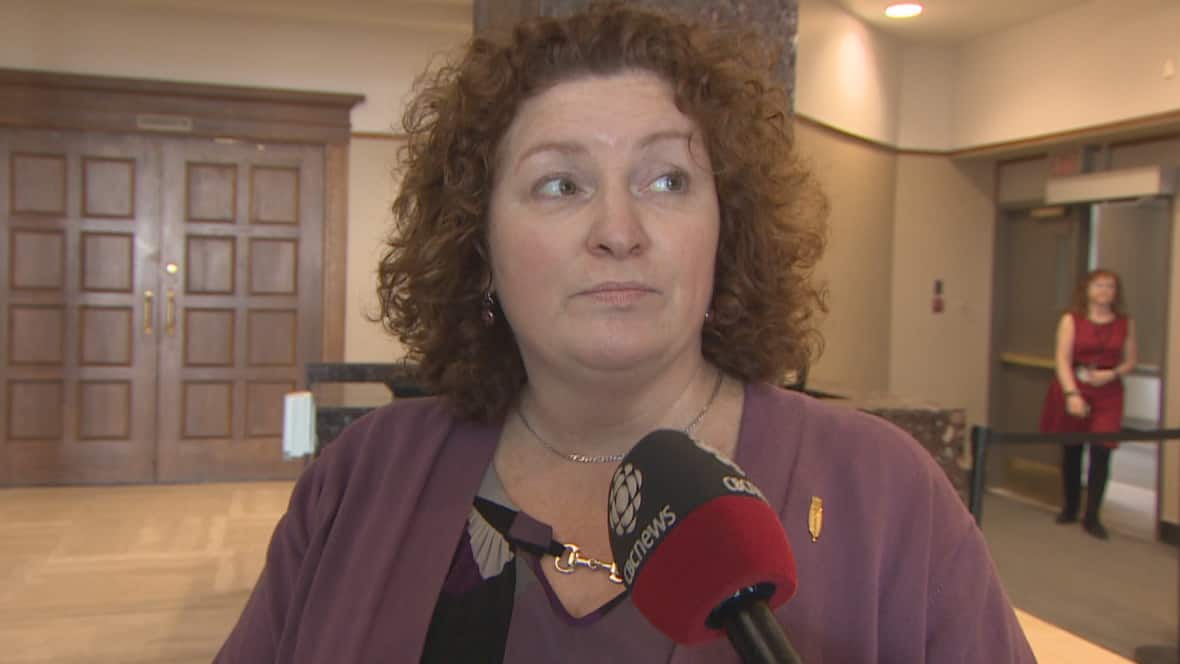 "I'm talking about this now because, unfortunately, Minister Joyce — unfortunately, today, my name has been put out in the general public. My intent was for the process to work itself out, but that's not happening," she said when asked why she was coming forward.

"I wish for it to happen and I want it to happen, and I'm standing here and speaking to you because I want the process, and I want people to feel comfortable to come forward if they're experiencing any form of harassment."

After Gambin-Walsh identified herself as the complainant, Joyce told reporters he has no idea what she is talking about, adding he's not aware of any behaviour that could be seen as harassment or bullying.

How can you be a bully when you're dealing with everybody in the House of Assembly?- Eddie Joyce

"How can you be a bully when you're dealing with everybody in the House of Assembly?"

Denies being a bully

"Is that being a bully with people? If that's the kind of stuff that all of sudden people say … I have no idea where anybody ever said that I was a bully." 'How am I a bully?' Eddie Joyce says

Joyce, though, said Perry did write him to say she didn't like his behaviour, which he said was due to him telling her to put a funding request in writing — the same thing he asks of all MHAs.

"That's not bullying. That's following the procedures. You know what she did? She wrote the letter — 'As per your request' — and she got the funding," said Joyce, who accused reporters of trying to make a story out of nothing.

Gambin-Walsh said Ball had no knowledge of her complaint until she spoke to him about it Wednesday morning.

Earlier Thursday, the premier asked Joyce to step aside as minister as an independent external review looks into harassment allegations against the veteran MHA.

Ball said following Wednesday's news of the allegations, he held a followup meeting with the complainant — who hadn't been identified at the time and they decided the review was the best course of action. Joyce was in "full support" of the review, according to the statement from the premier's office.

After Thursday's question period was cut short — Opposition members asked for a recess to deal with the new information, and Ball responded by motioning for adjournment — Perry said the culture of bullying "is alive and well in the House of Assembly today."

"Politics may have been ruled by bullying and that might have been the way things were done in the past. It's no longer acceptable," she said. "We want more women in the workplace. We want more men to feel comfortable here as well. It is time to change."

Perry said she'd had problems with Joyce's behaviour in an incident last year, calling it intimidation and "efforts to embarrass."

She declined to elaborate as she plans to file a formal complaint herself.

"I've heard stories that are far worse than mine, so I think we should let the process unfold," she said.

Ball told reporters that he encourages anyone with a complaint to come forward.

Davis criticized the Liberals' handling of the situation, and especially Ball for not immediately suspending Joyce from cabinet.

"The premier can't see through the fog to understand what he immediately needs to do with his colleague," he said. "I think it's a terrible, absolute disgraceful lack of judgment by the premier to not act swiftly and harshly, directly, very definitively … He didn't do it yesterday, he didn't do it again today."

Andrew Parsons to take over portfolio

Justice Minister Andrew Parsons will assume ministerial duties for Municipal Affairs while the review is ongoing.

"When this came up I was just as surprised as anyone else. The good news, if there is good news, is that it's being treated seriously and through an independent investigation."

When asked about an email sent to Parsons and other members of government last fall regarding Joyce's behaviour, Parsons said it had nothing to do with harassment or bullying, but was about issues surrounding a district dispute in the Bay of Islands area.

The justice minister also said he feels decorum has changed in the House of Assembly since he started as an MHA seven years ago, but that it's always a fine balance to strike between passionate debate and not being offensive.

"When you get so determined to get action then it's very easy to get too heated. I think times like this serve as a lesson that, at the end of the day, we're all here for honourable intentions, to do good on behalf of the people that elect us," he said.

"I've seen my colleagues threatened. That's not acceptable — I don't care who's in power, who's in government and what political stripe."

Joyce, who was an amateur boxer in the 1970s, is also known for being a scrapper in the political ring and has been a player in Liberal politics in Newfoundland and Labrador for decades.

He earned a footnote in history in 1989, when he was elected in the Bay of Islands district — and then resigned a day later to allow then-premier Clyde Wells to take his seat. Wells had led the Liberals back into government, but lost his own race in Humber East.

Joyce served as constituency assistant to Wells and played a similar role for his successor, Brian Tobin.

Joyce was elected again in 1999, and held the seat until he was defeated by Tory Terry Loder in 2007. Joyce staged a comeback in 2011 and has held the seat — now known as Humber-Bay of Islands — since.

In the 2015 election, Joyce received almost 85 per cent of the votes cast in his district.

With files from Fred Hutton