A woman living with a terminal cancer diagnosis says she giggled like a child on Monday night, as she took to a sled and relived some of her favourite moments of her rural Newfoundland youth.

'I wanted to show the kids what it's like to have an old-fashioned Christmas,' says Hope King, 55 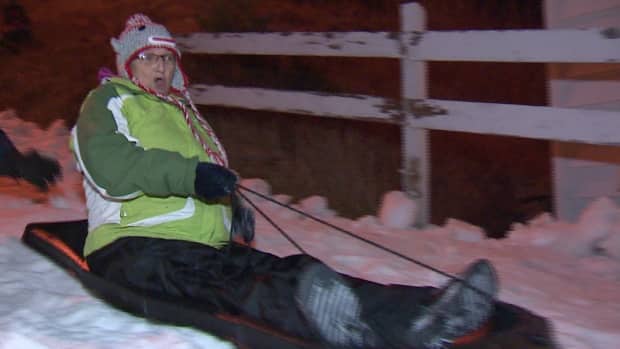 A woman living with a terminal cancer diagnosis says she giggled like a child on Monday night, as she took to a sled and relived some of her favourite moments of her rural Newfoundland youth.

Her wish to slide down the hill near her Harbour Grace home one last time, as she did countless times as a young girl, was fulfilled by friends who rallied residents of the town and nearby Bay Roberts to make her dream come true.

Their challenges included dealing with a critical missing ingredient: No snow on the ground.

On Monday night, people from the town held a community party as King enjoyed a few runs down the small hill, and neighbourhood children joined her in squealing with delight.

King, who is battling lung and liver cancer, said the reaction of the children was what she wanted all along.

"I wanted to show the kids what it's like to have an old-fashioned Christmas," she told CBC News. "We had good times on this hill."

'Joy and happiness to everyone'

"We were having tea and she said what she would like to do as a bucket list, I guess, was to slide down this hill as we did when we were children, while she had time and she was able," Smith said.

Smith and her friends kicked into gear, quickly putting together an event that not only helped King, but entertained neighbours. Smith said it was the least she and others could do.

"There has to be a reason her name is Hope, because she exudes hope. It just oozes out of her," Smith said. "She lights up wherever she is. She brings joy and happiness to everyone who touches her life, and whose lives she touches."

In an interview, King said she knows that she has a limited amount of time to live. She said, though, that she is not putting her life on pause.

"Life still goes on. You still have to live. So I am going to make the most of every day that I do live," she said.