20 years later, Hibernia really changed us (and not entirely for the better)

After two decades, billions of dollars and the occasional global collapse, quite a lot changed once Hibernia went into production, writes John Gushue.

A little more than 20 years ago, I was working on a CBC Television documentary series called East of Canada, which had the aim of covering 500 years of history in Newfoundland and Labrador. It was an ambitious undertaking, even with five one-hour episodes (and, believe me, there are not a whole lot of pictures to describe most of those years).

In the spring of 1997, toward the end of production, there was an event that seemed perfect for visual contrast of where the place had been and where it might be going: the towout of the Hibernia platform. We had been chronicling the upheavals of history, the rise and fall of the codfish, the aspirations and dashed dreams of a place that never quite found its economic footing.

Seeing that massive platform glide past coastlines was a bit surreal; no wonder people lined up for the experience.

It was a visual we knew we wanted to capture.

At the time, the thinking was that Hibernia would transform the place. And it did — it just took a while.

A sluggish start for an oil producer

First oil came a little earlier than had been expected. Instead of a Christmas present, we found out Nov. 17, 1997, that Newfoundland and Labrador was officially an oil-producing province. (If memory serves, the first oil had actually been quietly pumped out a few days before.)

And then … well, not much changed, at least for a while. 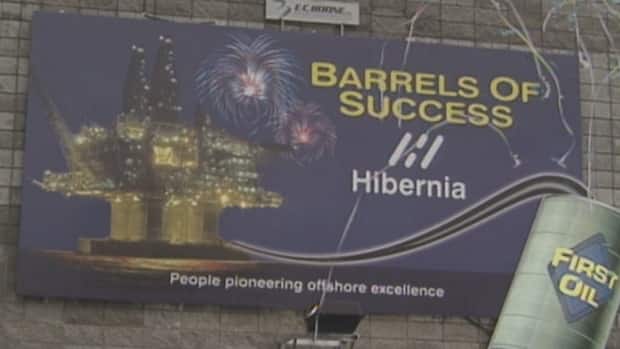 For those who didn't live through it, the end of the 1990s was not a particularly pleasant time. The fallout of the 1992 moratorium took a while to take effect. By the time oil was being drawn into that gravity-based structure, tens of thousands of people were being drawn out of coastal communities.

The economy in the late '90s was tough. I can speak to this first-hand. In 1999, when my wife and I moved from Paradise to St. John's, we could not sell our house, even when we listed it for less than what we paid originally. We eventually found a tenant whose rent just covered the mortgage.

In the money? Oh, not yet

That was a brutal time. Newfoundland and Labrador might have been in the oil, but man, we were not in the money.

Gradually, things improved. By 2001, when we relisted the house in Paradise, it quickly sold. (Hindsight tells me, of course, we ought to have hung onto that house, which we sold for much less than what we could have gotten a decade later.)

Likewise, the economy took a few years to perk up … but it did. By late 2003, the vacancy rate in St. John's was down to two per cent.

Unemployment rates went down, help-wanted signs went up. Housing prices soared, and soared again … and not just on the northeast Avalon.

By that point, we were a bit woozy on the oil.  Hibernia had been joined by Terra Nova and White Rose, and the oil revenues were flooding in. Three fields were in production, and oil prices were soaring, jumping about $30 in 2007 alone.

Getting used to the money fountain

The problem with accelerated and stunning growth is that people tend to think it's the new reality, that things are going to stay this way. While that goes especially for politicians, it applies also to homebuyers, consumers and regular folks.

But really, it applied to politicians. In 2008, Confederation Building started hammering out generous wage packages worth about 20 per cent over four years. Sure, the idea was to make up for loads of lean years beforehand … but, well, 20 per cent.

Things changed. The bottom fell out of the world economy, and that eventually caught up to us when oil prices fell back down to earth. Government's cascade of cash turned back to a trickle.

Equalization payments, which we relied on for generations while biting our tongue, are a thing of the past because we are, technically, no longer a have-not province. (The formula is based on fiscal capacity, and not the public's sense of self.)

And, oh yes, then came Muskrat Falls, the multibillion-dollar burden that we'll be carrying for years and years to come.

All of these reality checks don't compare with the hurt of March 12, 2009, when a Cougar helicopter crashed into the North Atlantic, killing 17 people aboard, and providing the starkest reminder since 1982's Ocean Ranger disaster that the offshore oil industry comes with very real perils.

A Stavanger frame of mind

So, here we are, 20 years after Hibernia started. We've changed. We're more measured now about oil, we tell ourselves. Yes, oil prices have been going up lately, but our provincial fiscal mess is still horrid. Just last week, our deficit forecast got even gloomier.

Well, at least we still have shopping. The retail trade in the province doubled in the Hibernia era; it was worth $1.5 billion in 2015, worth more than the fishery, transportation and forestry — combined.

I can't help but notice a main magnet for those shoppers is the Stavanger Drive area of St. John's, a collection of big box stores named after the Norwegian city that was transformed by the North Sea oil boom. You often can't find a parking space near Costco, so things can't be all that bad … right?

Names like Stavanger seemed to be aspirational. I'm not sure what they are now.